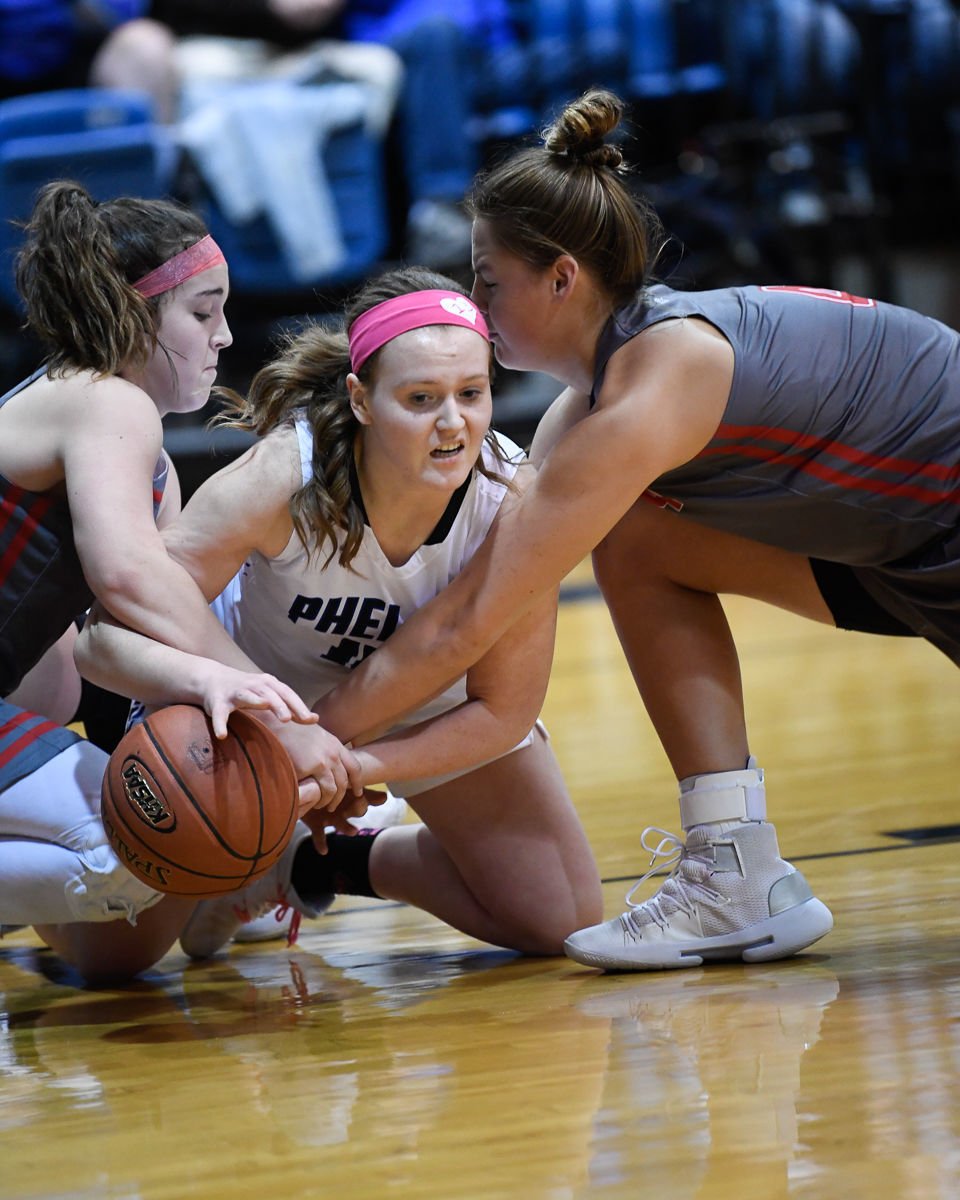 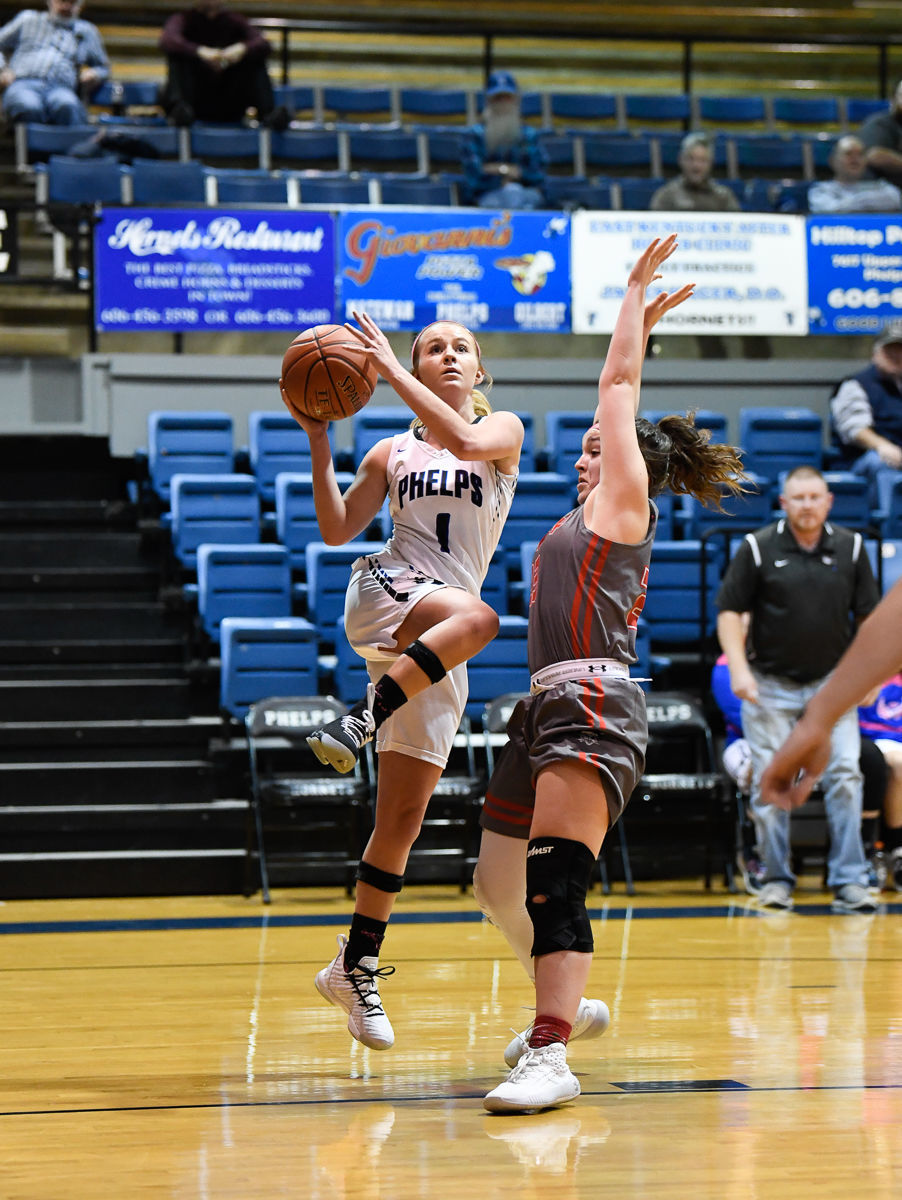 Phelps guard Danielle Prater floats a shot past Belfry’s Keyera Thornsbury during the Lady Pirates’ 62-40 win over the Lady Hornets on Friday at the McCoy Athletic Center.

Phelps guard Danielle Prater floats a shot past Belfry’s Keyera Thornsbury during the Lady Pirates’ 62-40 win over the Lady Hornets on Friday at the McCoy Athletic Center.

GOODY, Ky. — The Belfry Lady Pirates and the Phelps Lady Hornets split a pair of games against each other this past week as each squad picked up a win on the other’s home court.

The first matchup between the two 60th District foes came on Tuesday of last week on Pond Creek, as the Lady Hornets made the trek to Belfry.

The Lady Pirates came out of the gate fast and led by a score of 11-8 after the first eight minutes of play. The visiting Lady Hornets turned the tide in the second frame as they outscored Belfry 13-9 and took a 21-20 lead into the halftime locker rooms.

Coming out in the third quarter, the two squads traded blows but the Lady Hornets extended their lead to three going into the fourth quarter at 36-33.

In the final eight minutes of play, coach Devin Stilltner’s squad held off a couple of rally’s by the Lady Pirates and were able to secure the big six-point road win.

Senior guard Danielle Prater did a little but of everything for the Hornets as she scored a game high 23 points while also grabbing four rebounds, snatching four steals, and dishing three assists.

For Belfry, senior Katie Ball and sophomore Cushi Fletcher led the way with 15 points apiece while eighth-grader Keyera Thornsbury followed with 10. Ball had a double-double as she grabbed 15 rebounds. Alyssa Varney drained a three-pointer and Makenna Sullivan swished a free throw to round out the scoring column for BHS.

The Lady Hornets drilled 8-13 free throws while Belfry hit only 8-19.

BELFRY 62. PHELPS 40 (Jan. 31): The Belfry Lady Pirates and the Phelps Hornets met for the second time in four nights on Friday as BHS made the trek to the McCoy Athletic Center and knocked off the Hornets 62-40.

It was like day-and-night from the matchup earlier in the week as BHS controlled the temp from start to finish, leading 12-9 after the first eight minutes of play.

Head coach Kevin Deskins’ squad added to their lead in the second frame as they outscored the blue-and-white 14-10 to take a 26-19 lead into the break.

BHS put the game away in the second half as they used a strong third quarter in which they outscored the Horets 19-9 to take a 45-28 lead into the fourth where they would cruise to the 22-point win.

Senior Katie Ball recorded another double-double for the Lady Pirates as she scored 18 points ans snatched 12 rebounds. Sophomore Cushi Fletcher had another nice game as she was right behind her with 19.

Sophomores Kyra Justice and Linzee Phillips added nine points each for BHS while Keyera Thornsbury dropped in six, Alyssa Varney scored two, and Makenna Sullivan scored a free throw to round out the scoring for the red-and-white.

The Lady Hornets saw their record move to 13-9 on the season while the Lady Pirates sit at 11-10. Phelps was back in action last night against Hurley on the road, but scored and stats were not available by press time. Phelps is set to host district foe Pike Central on Saturday in a 6 p.m. tip.

The Lady Pirates also played host to Pike Central on Monday night, but scores and stats from that game were not available by press time. They will then hit the road on Thursday and play at Pikeville before returning home on Friday to host Magoffin County in a 7:30 p.m. tip.