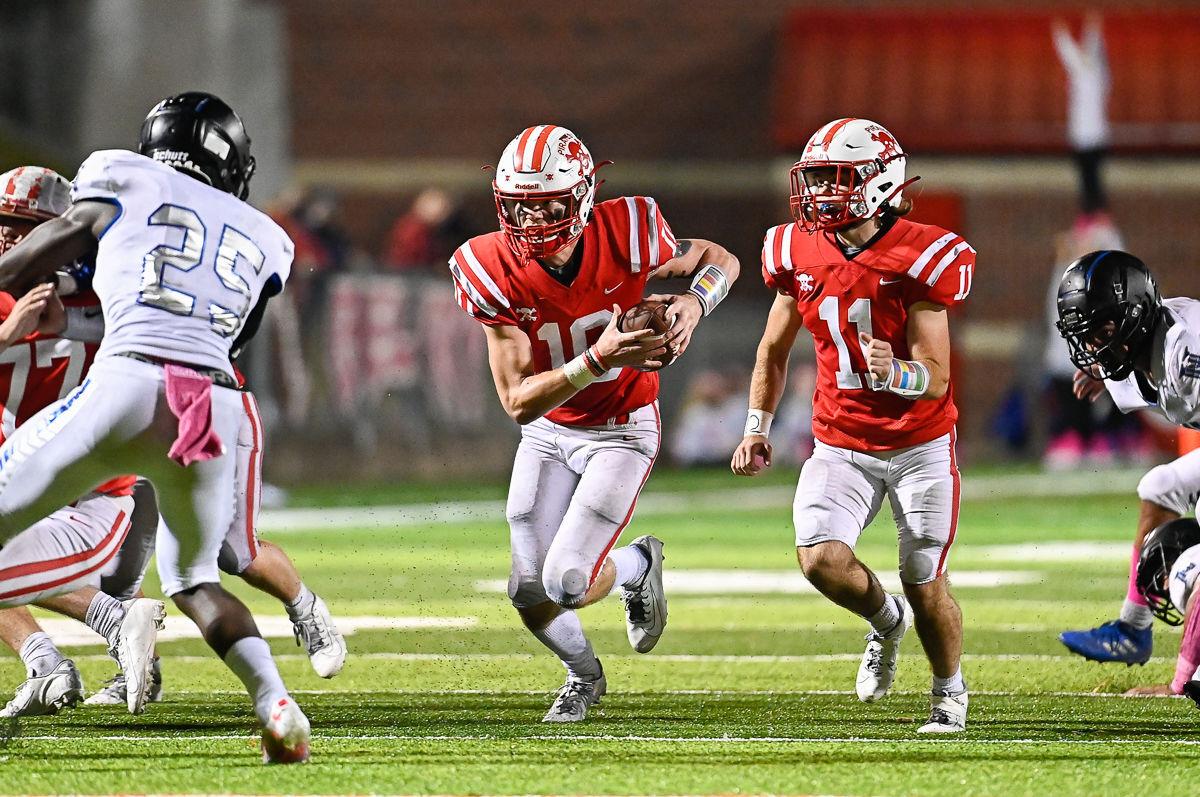 Belfry senior QB Brett Coleman hits a hole while running back Brenden Rash looks for a block during the Pirates narrow 21-20 loss to North Hardin on Friday at Haywood Stadium. 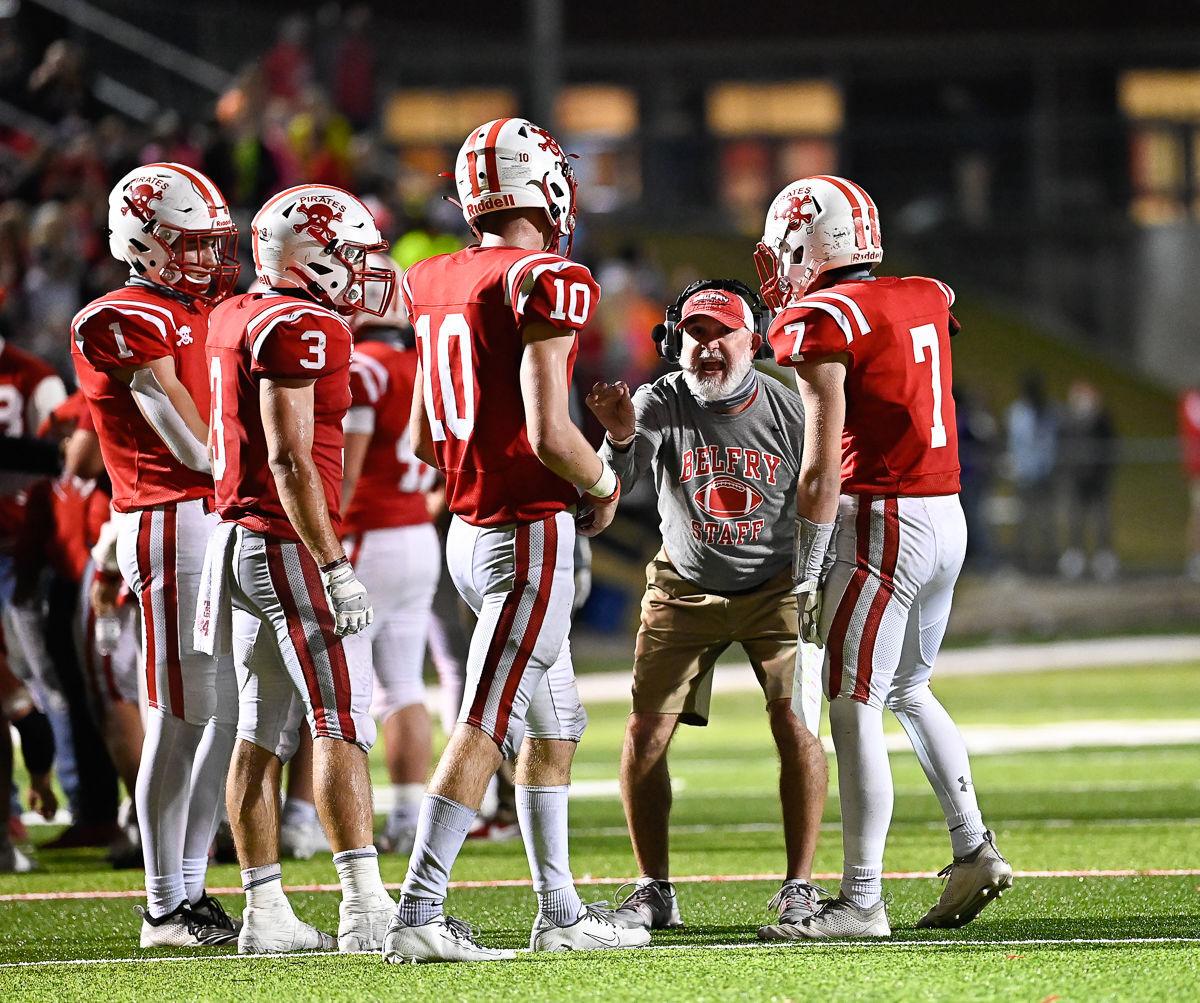 Belfry assistant coach Todd Cassell barks orders at members of his defense during the Pirates narrow 21-20 loss to North Hardin on Friday, Oct. 9, 2020 at Haywood Stadium.

Belfry senior QB Brett Coleman hits a hole while running back Brenden Rash looks for a block during the Pirates narrow 21-20 loss to North Hardin on Friday at Haywood Stadium.

Belfry assistant coach Todd Cassell barks orders at members of his defense during the Pirates narrow 21-20 loss to North Hardin on Friday, Oct. 9, 2020 at Haywood Stadium.

GOODY, Ky. — The defending Class 3A Champion Belfry Pirates nearly shocked the Bluegrass State this past Friday night as they had 6A power North Hardin on the ropes but fell as the Trojans scored a late touchdown to sneak away with a 21-20 win at Haywood Field.

Coming into the contest, not many across the state gave BHS a chance against No. 2 ranked North Hardin. The Trojans boast the most D1 commitments of any school in the state with four, including two already committed to the University of Kentucky.

The Pirates ( 3-2) and legendary head coach Philip Haywood will not bow down to any level of competition and they gave the Trojans all they could handle, and then some.

Debuting a new formation on offense which featured Kentucky Mr. Football candidate Isaac Dixon lining up at the fullback position, BHS was able to work their way down the field for the games first score early in the second period.

A one-yard scamper from QB Brett Coleman, who is committed to D1 Miami (Ohio), gave Belfry the 6-0 lead following an 11-play, 80 yard drive.

Junior Gideon Ireson’s extra point was true and the Pirates took the 7-0 lead with 9:19 to play in the first half.

After being forced to punt on their first two possessions by the Belfry defense, the Trojan offense finally began to move the ball down the field as they went on a 12-play, 57-yard drive capped off by a 3-yard run from UK commit Lavell Wright.

Cayden Logsdon drilled home the extra point to knot the game up at seven apiece with 4:52 left in the half. The score would remain the same going into the halftime locker rooms.

Coming out of the break, the Pirates received the ball first and mounted a long, clock-chewing drive that ate up nearly nine minutes of the third quarter clock.

After starting the ball on their own 32-yard line, the Belfry running attack worked their way down the field with steady runs by Dixon and Coleman and found pay-dirt on the 15th play of the possession.

Coleman ran his second touchdown of the day as he bullied his way into the end zone from 15-yards out, breaking tackles against UK commit Jordan Lovett and Tulane commit Michael Lunz along the way.

Ireson’s PAT split the uprights and the Pirates took the 14-7 lead with 3:02 left in the third.

On the ensuing kickoff the first of two costly special team mistakes would hurt the Pirates as the ball was booted into the talented hands of Lavell Wright and he returned it all the way to the BHS 33-yard line.

The Belfry defense nearly forced a stop, but junior QB Manie Wimberly snuck his way into the end zone nine plays later on a 4th and goal from the one-inch line. The PAT was good, and the game was knotted back up at 14 with 11:28 left in the game.

The Pirate answered the blow by the Trojans with another long, clock-chewing drive behind the legs of Dixon and Coleman and the big BHS offensive line.

Dixon produced runs of 17, 11, and 10 yards on the drive but Coleman capped it off with his third TD run of the day, this time from three yards away, to give BHS the six-point lead.

The snap on the extra point was bobbled however by the Pirate holder and the kick was never attempted, as the score remained 20-14 Belfry with 3:44 to play in the game.

Needing a stop to secure the massive upset, the “Big Red” defense nearly did just that as they forced North Hardin into a 4th and 6 deep in their own territory.

The Trojans picked it up however, as Wimberly found a receiver streaking across the middle of the defense to extend the drive.

With the lock well under a minute to play, Trojan head coach Brent Thompson called a screen for Wright as Wimberly dumped it off to the talented back and he powered his way into the end zone from 15-yards away to tie the game up at 20 apiece with only 28 seconds left.

Logsdon’s extra point proved to the the difference as it split the uprights to give North Hardin the 21-20 lead.

Belfry would attempt to work their way into field goal range but could not do so as Coleman was picked off by Lunz as the Trojans secured the win.

Belfry outgained NHHS in total yardage on the night as the red-and-white amassed 286 total yards in the game to North Hardin’s 189 total yards.

All of Belfry’s yards were picked up on the ground as Coleman and Dixon each totaled 100-yards out of the BHS backfield.

Coleman ran the ball 20 times for 154 yards and the three touchdown runs on the night while Dixon produced 130 yards rushing on 24 carries.

Wright ran 16 times for 87 yards and a TD for the Trojans and also added the late receiving score to give his team the win.

The loss for BHS sees their season record fall to 3-2 as they prepare to return to district play and play at Lawrence County on Friday night in a 7:30 p.m. kick.

The Bulldogs will enter play with a 2-0 record on the season and are coming off a 29-28 win last week against Pike Central.

The Pirates have won 20 consecutive contests against LCHS dating back to 2003 and own a 25-9 advantage all-time in the matchup.