Sign Up
Log In
Purchase a Subscription
You are the owner of this article.
Edit Article Add New Article
You have permission to edit this article.
Edit
Welcome, Guest
Home
News
Sports
Features
Photos
Opinion
Obituaries
Classifieds
Legals
e-Edition
1 of 11 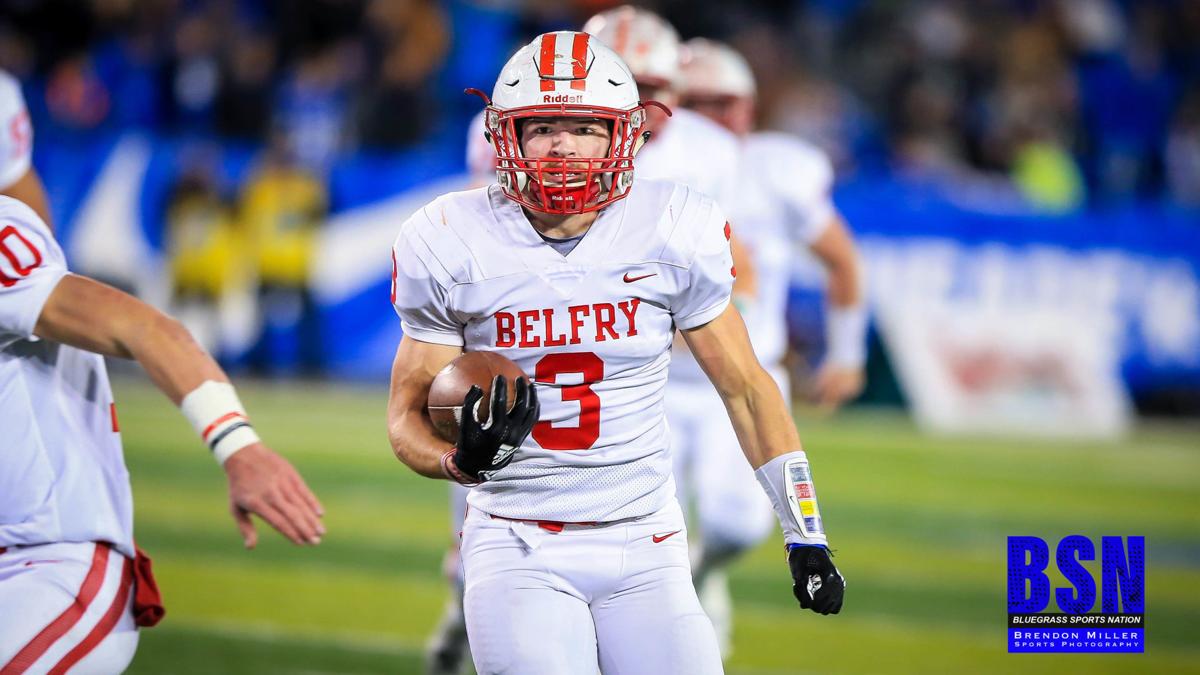 Belfry's Isaac Dixon breaks free for a 69-yard touchdown run in the second quarter of the Pirates 30-20 win over Bell County in the UK Orthopaedics/KHSAA Class AAA Gridiron Commonwealth Bowl. 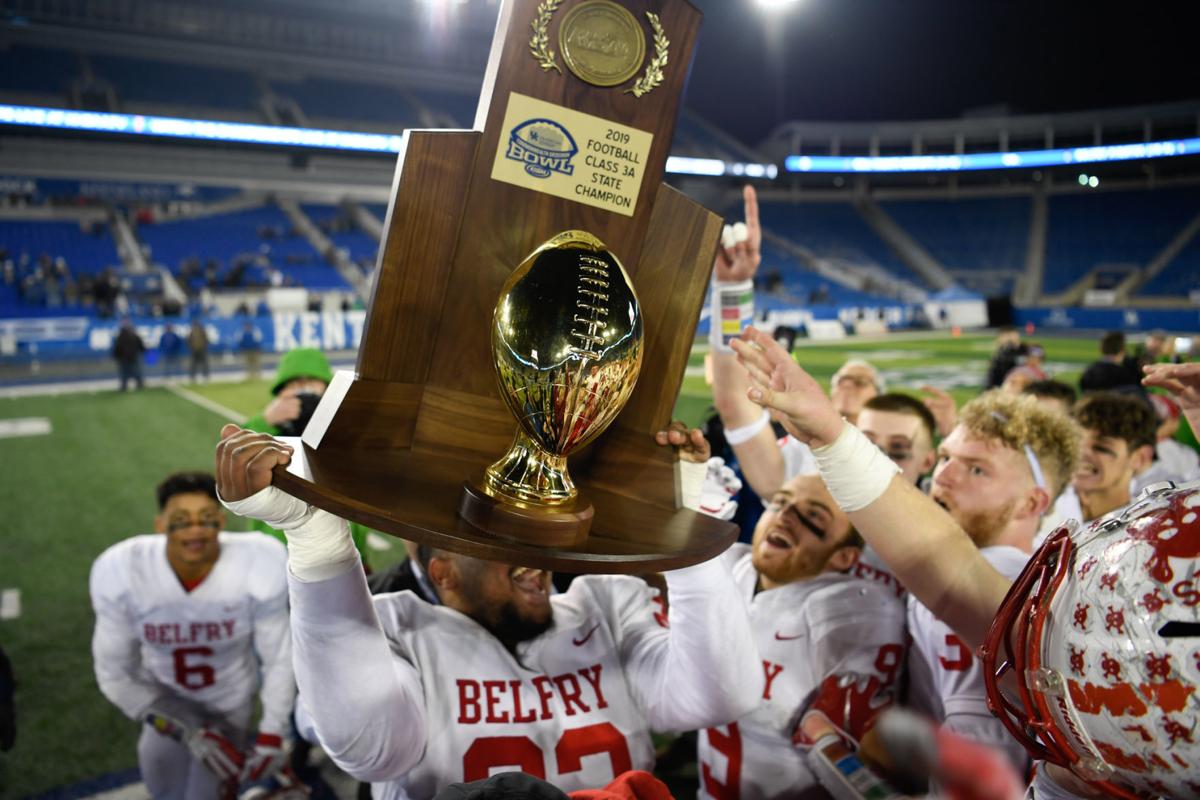 Members of the Belfry Pirates football team lift the 2019 KHSAA Class AAA Championship Trophy high into the sky after knocking off Bell County 30-20 at Kroger Field. 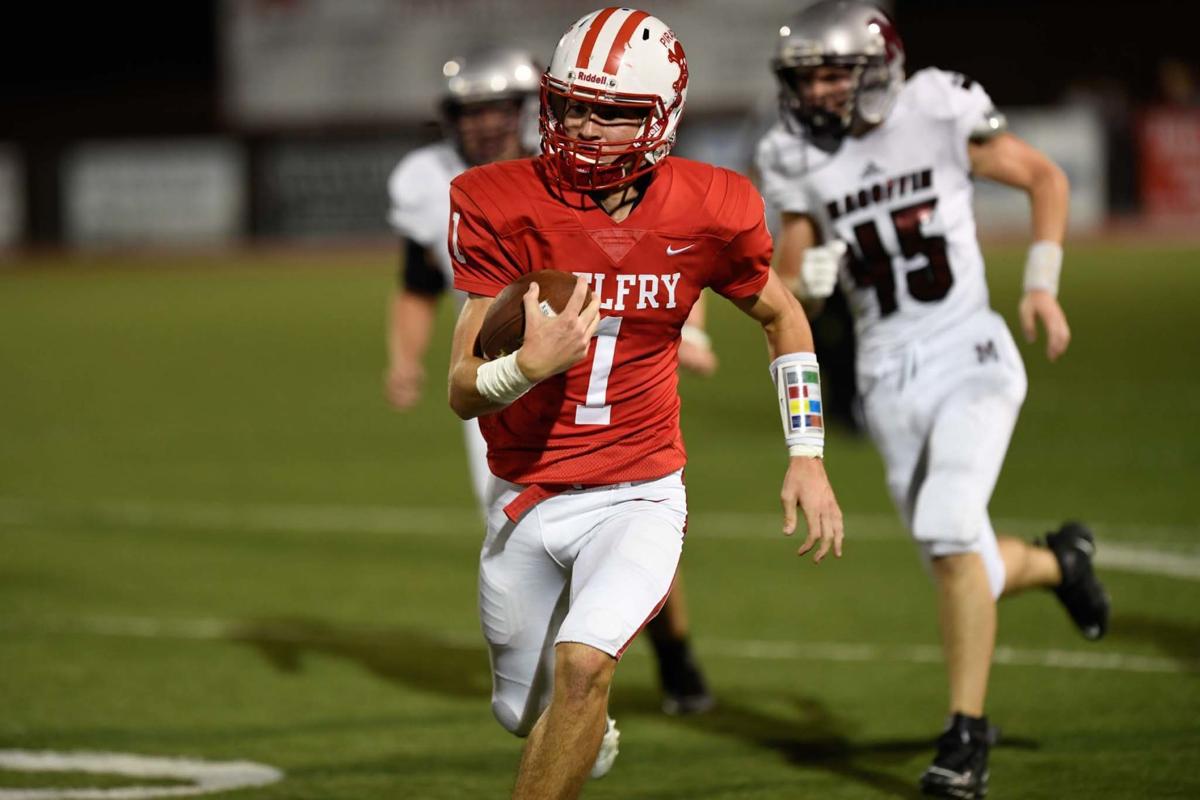 Belfry senior Tyler Chaffin runs with the ball during the 2019 season. 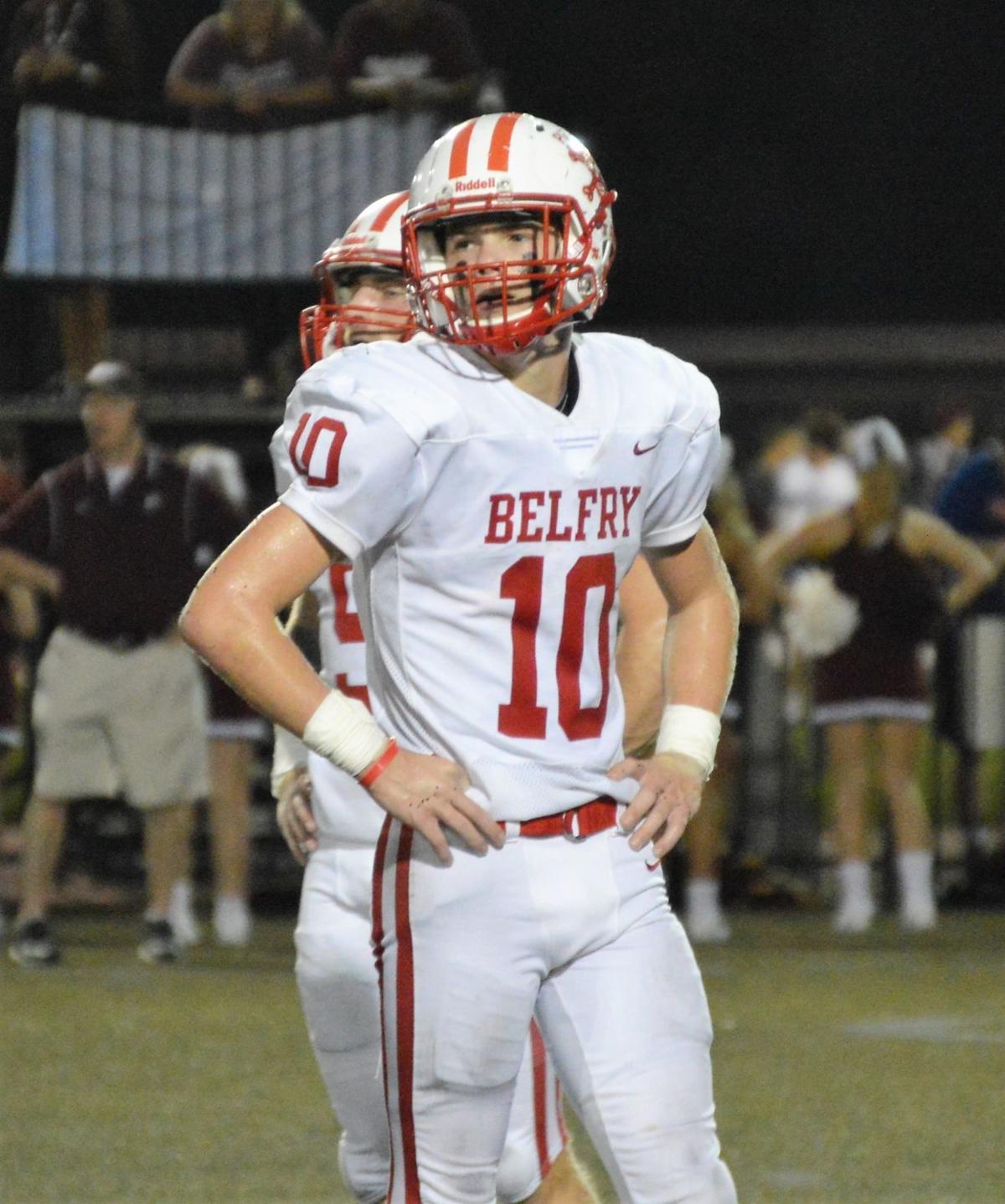 Belfry safety Brett Coleman looks to the sideline during the 2018 season. 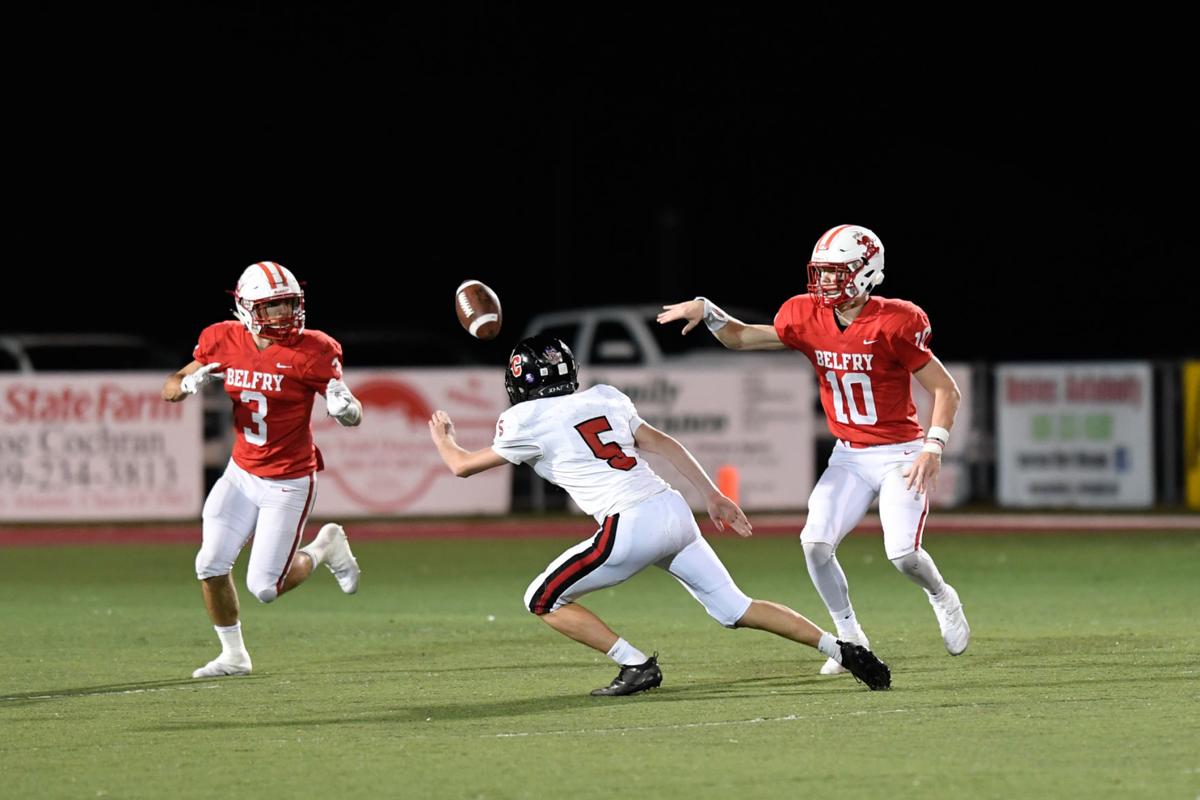 Belfry quarterback Brett Coleman pitches the ball to halfback Isaac Dixon in a contest during the 2019 season. 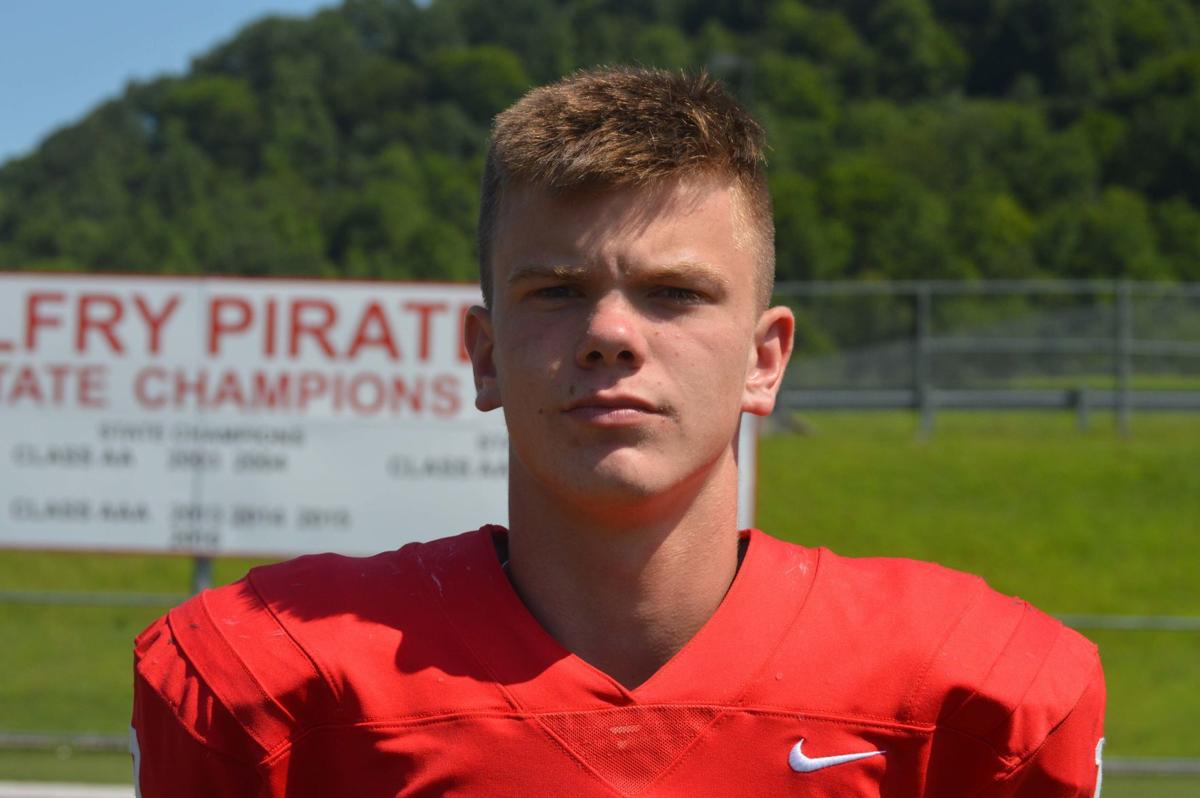 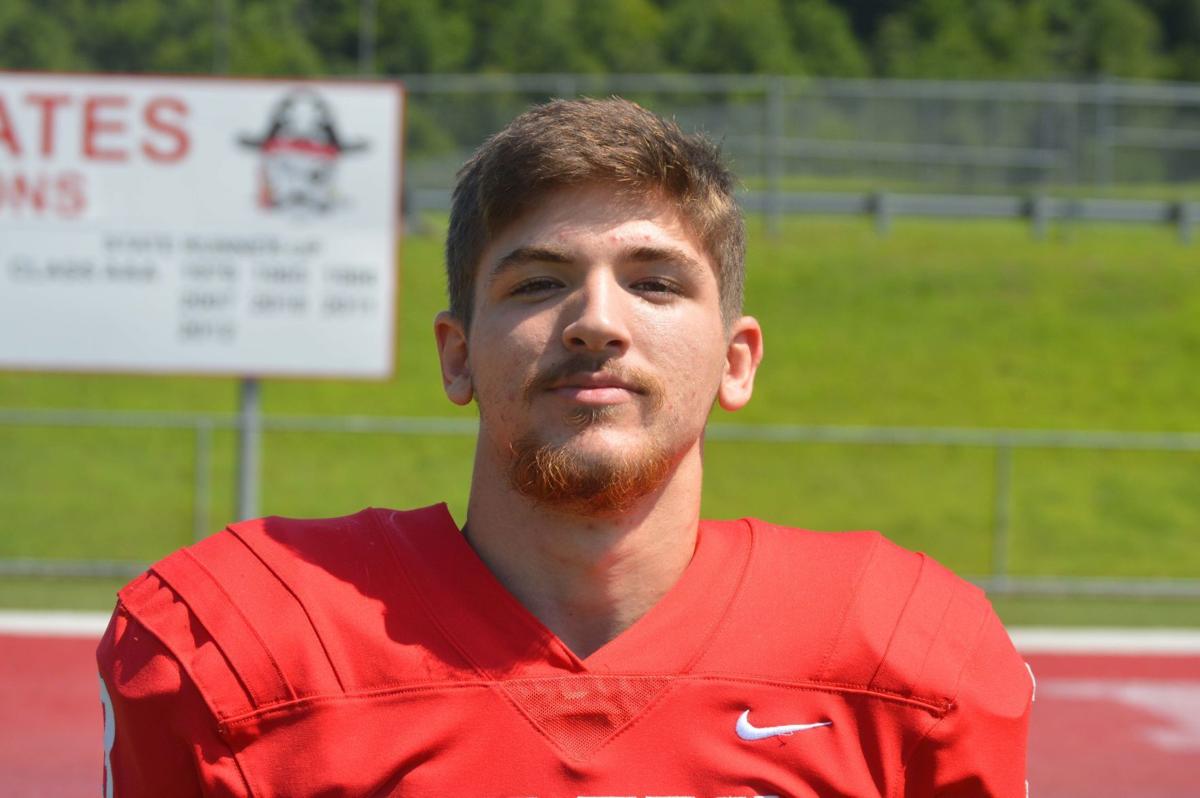 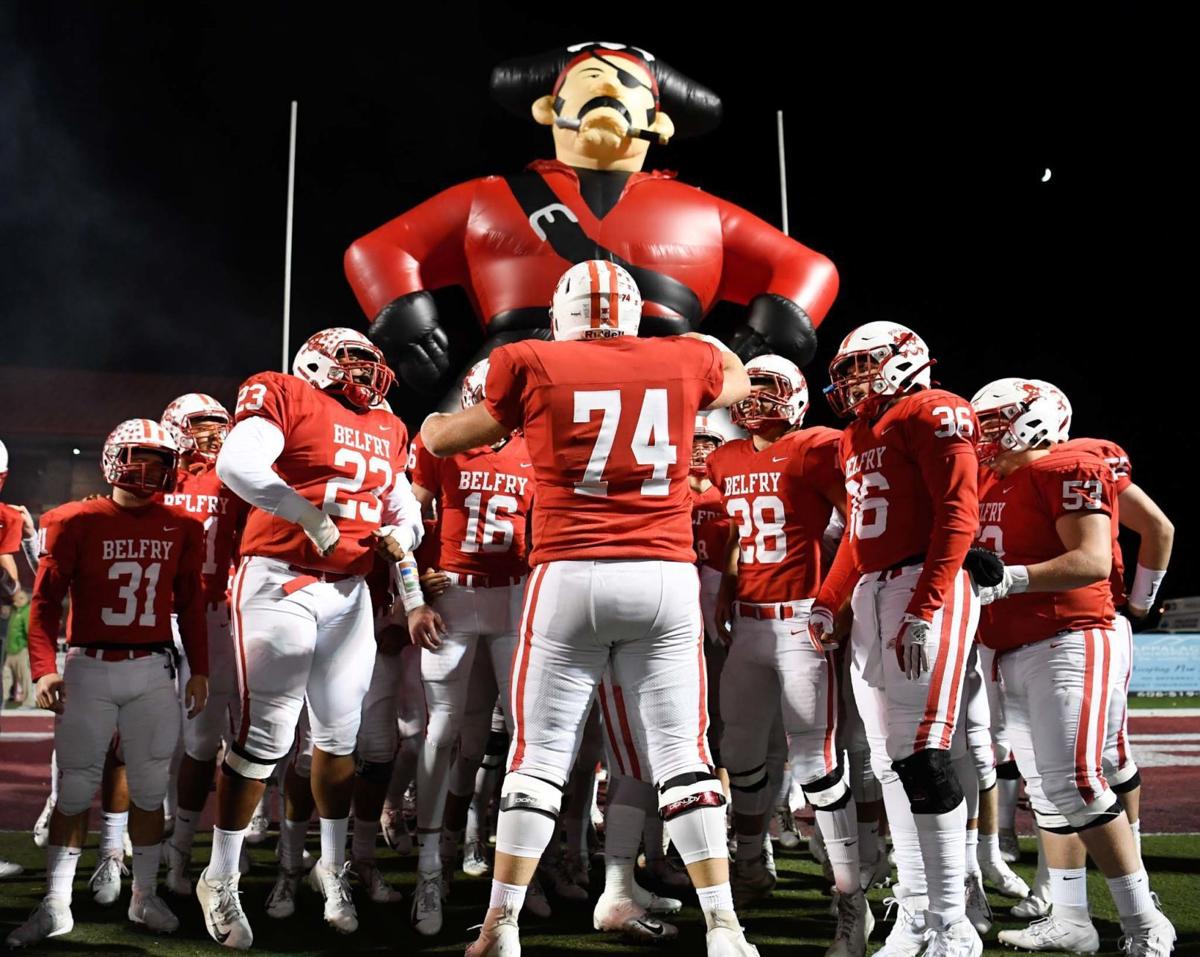 The Belfry Pirates prepare to take he field prior to a game in the 2019 season. 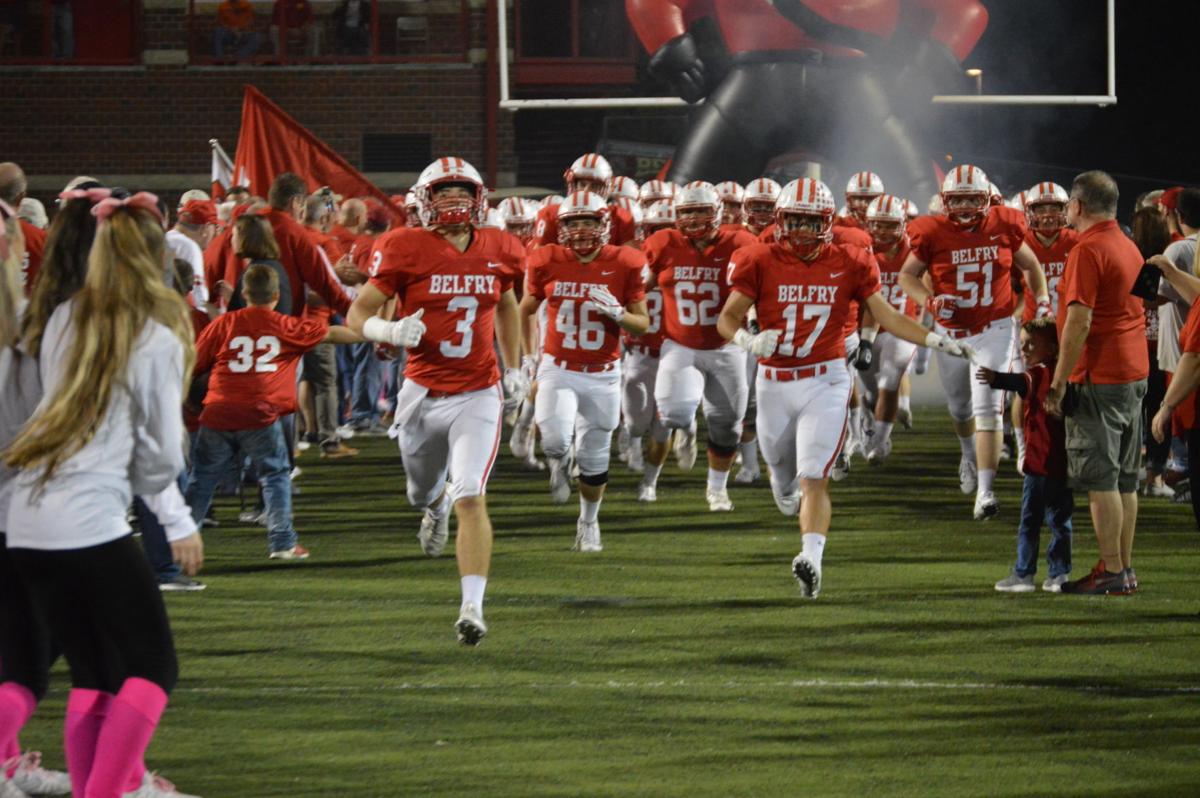 The Belfry Pirates take the field during “tunnel time” prior to a game during the 2019 season. 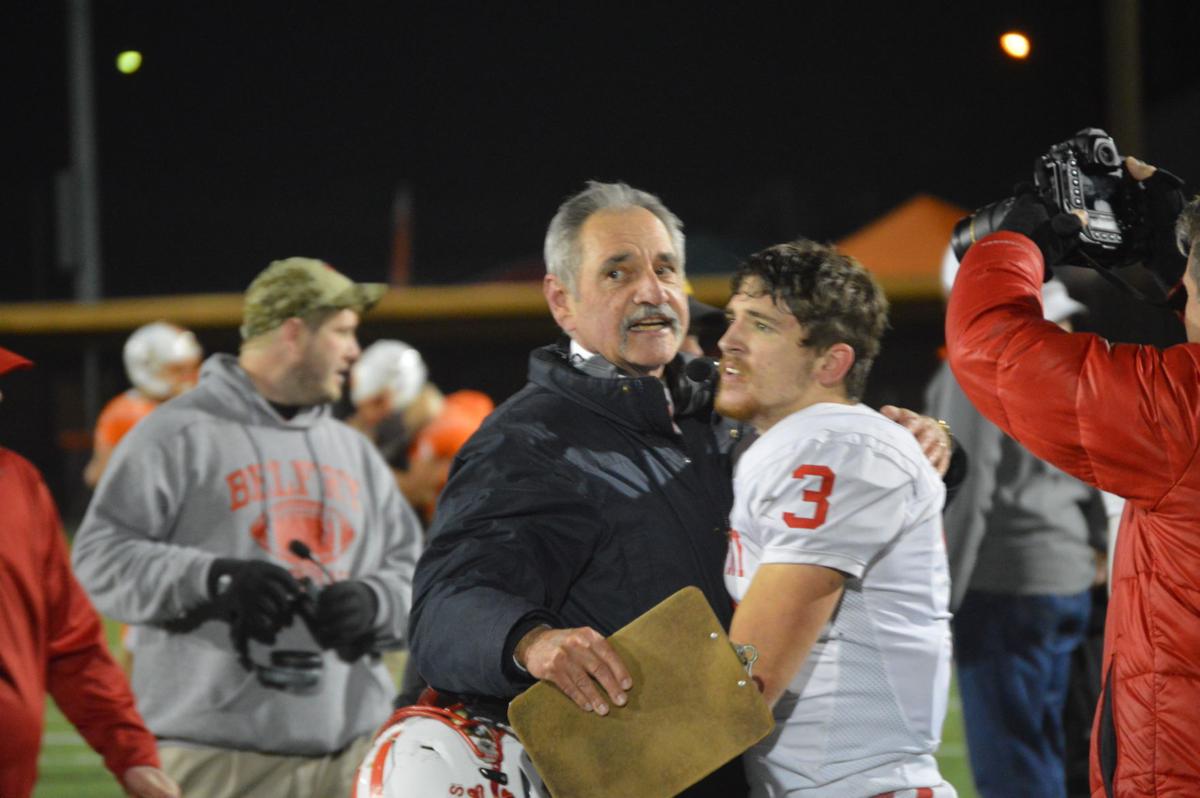 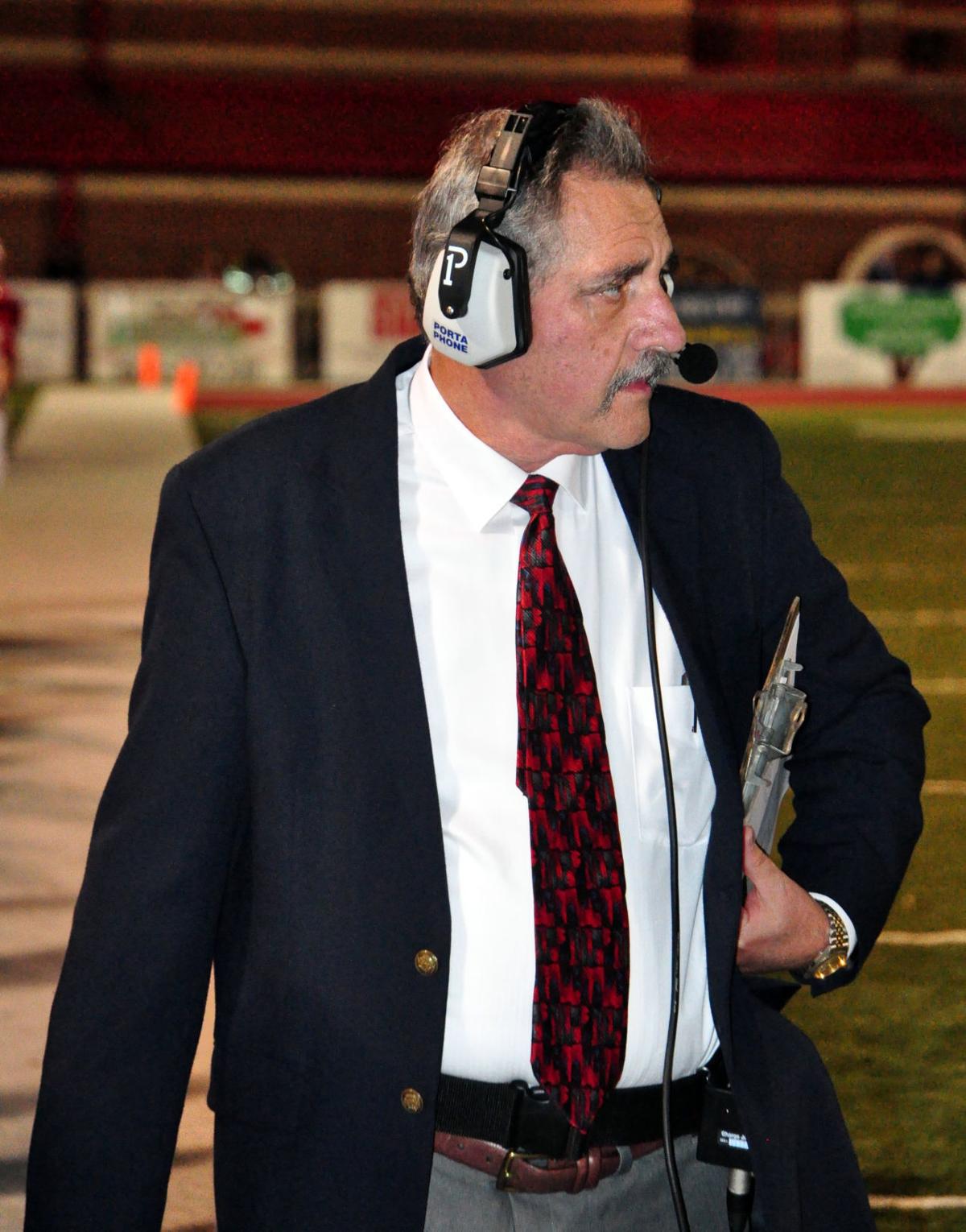 Belfry's Isaac Dixon breaks free for a 69-yard touchdown run in the second quarter of the Pirates 30-20 win over Bell County in the UK Orthopaedics/KHSAA Class AAA Gridiron Commonwealth Bowl.

Members of the Belfry Pirates football team lift the 2019 KHSAA Class AAA Championship Trophy high into the sky after knocking off Bell County 30-20 at Kroger Field.

Belfry senior Tyler Chaffin runs with the ball during the 2019 season.

Belfry safety Brett Coleman looks to the sideline during the 2018 season.

Belfry quarterback Brett Coleman pitches the ball to halfback Isaac Dixon in a contest during the 2019 season.

The Belfry Pirates prepare to take he field prior to a game in the 2019 season.

The Belfry Pirates take the field during “tunnel time” prior to a game during the 2019 season.

GOODY, Ky. — The Belfry Pirates continued their dominance over Class AAA in Kentucky in 2019 as they claimed the schools seventh state championship overall, and the fifth state title in the past seven seasons.

The powerhouse Pirates and legendary head coach Philip Haywood finished 11-3 a season ago and defeated Bell County 30-20 on Dec. 6 in the Class AAA championship game at Kroger Field in Lexington.

While they did graduate several talented players on both sides of the ball, the ‘Bucs also return a strong nucleus of talent in 2020 that should have them right back in the hunt for the school’s eight state championship.

“We had a great year last year and we finished the way we like to finish,” coach Haywood said. “We always tell our kids its not how you start its how you finish, and that may be more important this year than it was last year because we only have three weeks to practice before the season.

“So I think again we’re going to be a work in progress because we graduated some very good football players, key guys on our offense and our defense. We feel like we really have some good players coming up, but we need to replace those and experience is the greatest teacher. It will just take time for our young guys to be able to develop, but we’re really excited about our nucleus coming back.”

The Pirates welcome back senior running back Isaac Dixon, who has been a thousand yard rusher each of the past two seasons, and claimed the Most Valuable Player Award in the Class AAA championship game in 2019.

Dixon ran 15 times for 228 yards and three touchdowns in the title game and totaled 1,191 yards rushing on the season to go with 13 touchdowns, despite missing the better part of four games.

Also back in the backfield is senior quarterback Brett Coleman, who ran for six touchdowns and threw for six scores in his junior campaign.

But the Pirates will have to replace over 2,000 yards rushing and 32 touchdowns as fullback Peyton Hensley and running back Ben Bentley were each lost to graduation.

Coach Haywood, who is entering his 46th season overall as a head coach in Kentucky and 37th as the head man on Pond Creek, says that the competition for the open backfield spots is wide open.

“Right now its wide open, I can’t mention any names because its still so early. We’ve got a group of young fullbacks looking to replace Peyton Hensley who was our leading rusher last year. He was our only player to play every game in the backfield and because of that we dropped down a little bit, we are going to be really young and inexperienced at that position,” Haywood said. “And without scrimmages it will take us probably three or four works to find the best fits for that position. And the same thing with our halfbacks, there are a lot of potential guys there and were just going to have to play a bunch early and see who shakes out and can do the best thing.”

As expected, the Pirates once again will feature a heavy run attack with their patented triple-option offense, which means they will rely on their offensive line to move the defense and open holes for the runners.

Defensively is where the Pirates were hit the hardest as they lost seven players who contributed on that side of the ball in 2019, including six of their top eight tacklers.

They do however welcome back leading tackler Seth Mounts (6’3”, 196), who has already amassed multiple college offers heading into his senior season. Mounts made 112 tackles including 43 solo a year ago, and coach Haywood expects big things out of him in 2020.

“A big key will be we have Seth Mounts our leading tackler back at linebacker. He’s a stellar player and having him return is important,” Haywood said. “Of course Coleman played at safety for us, Tyler Chaffin played at corner, and then Dixon played some for us.

“But we lost all of our defensive lineman, we had four guys that rotated along our defensive front and then Grayson Cook graduated too. So we’ve got some holes to fill defensively for sure. It will just be a work in progress and hopefully a couple of linebackers and a couple of safeties will hold us together until we can learn how to play up front. But we feel like we have some really good young players coming up that we are excited about.”

Also back and expected to contribute defensively is senior Brad Lowe who came on at the end of 2019 after missing much of the season and sophomore Rudy Blackwell who started much of his freshman season before tearing his ACL in the postseason.

Just like every other team across the state of Kentucky, the daily operations of the Pirate football program will be drastically different in 2020 due to safety guidelines set forth because of COVID-19.

“We’ve been following all of the guidelines that have been put forward. Anytime that we are in a building we are telling the kids they have to wear mask, that is something they are required to do,” Haywood said. “Even in our workouts and conditioning we are keep kids spread out and up to this point we have been in relatively small groups...We have hand sanitizer everywhere and we clean the locker room and weight room after any group has been in there. We got all kinds of cleaning and sanitizing materials to do that and that’s something we will do after each practice.

“So we will follow all the CDC and Health Department protocols that have been out and about everything that we do we ask the local health department, ‘How’s this sound? Is this going to meet guidelines?’ Just to make sure that gives us some local people to ensure that we are doing the right thing for the safety of our kids, because that is still the upmost priority.”

Due to COVID-19, the Pirates currently only have an eight game slate in 2020 as they lost two games off of their original schedule, including a highly anticipated matchup against Mingo Central in the Pike County Bowl.

BHS will open the season on Sept. 11 at home against Class AAAAA Pulaski Countyand then play on the road in a rivalry contest against the reigning Class A Champion Pikeville Panthers the following week on Sept. 18.

BHS will once again play their home games on the friendly confines of CAM Stadium, which will have brand new field turf for the 2020 season.

NOTE: Due to a press deadline of Aug. 23 and Kentucky schools not beginning practice until Aug. 24, an official roster was not able to be provided by the Belfry coaching staff.