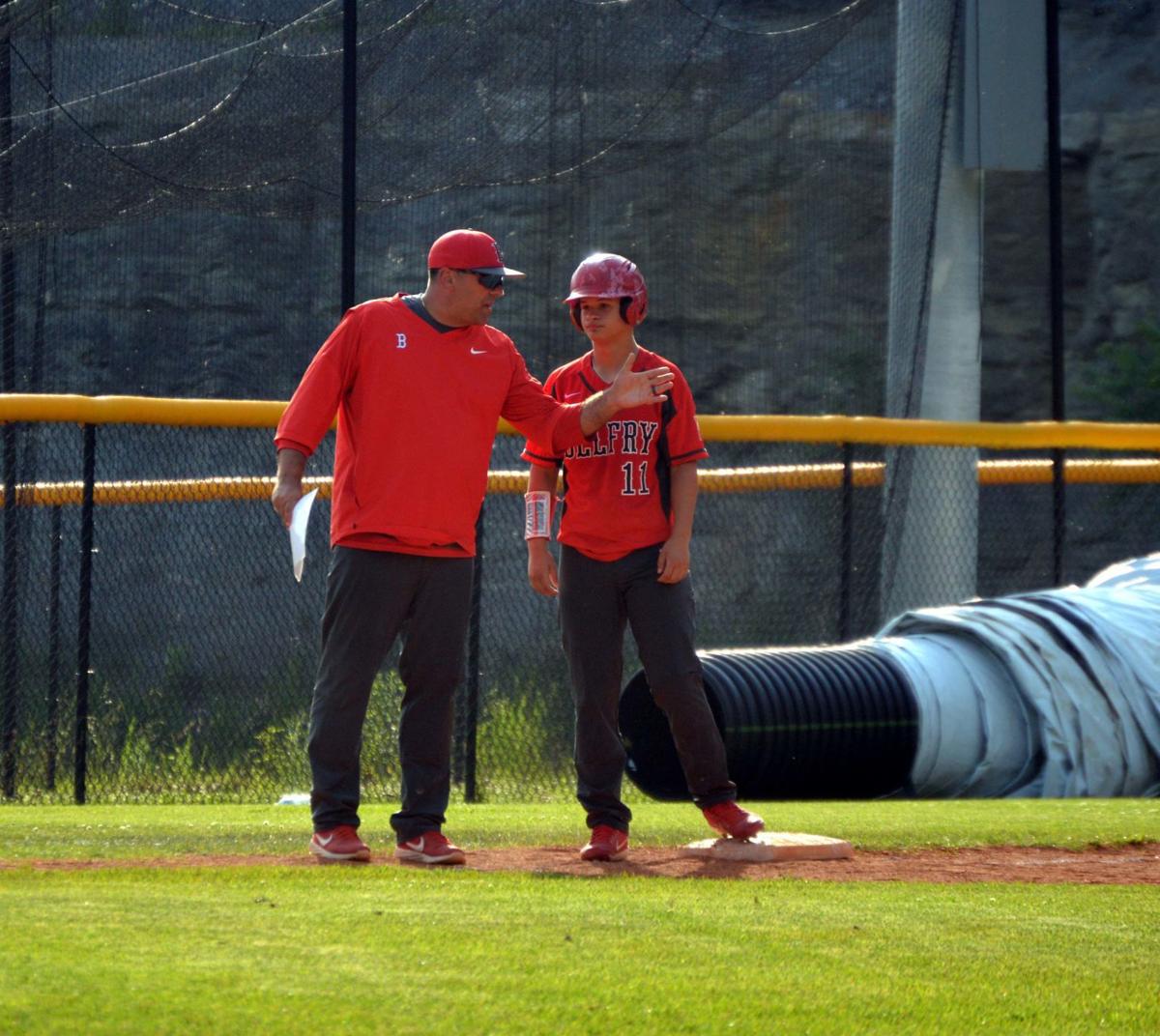 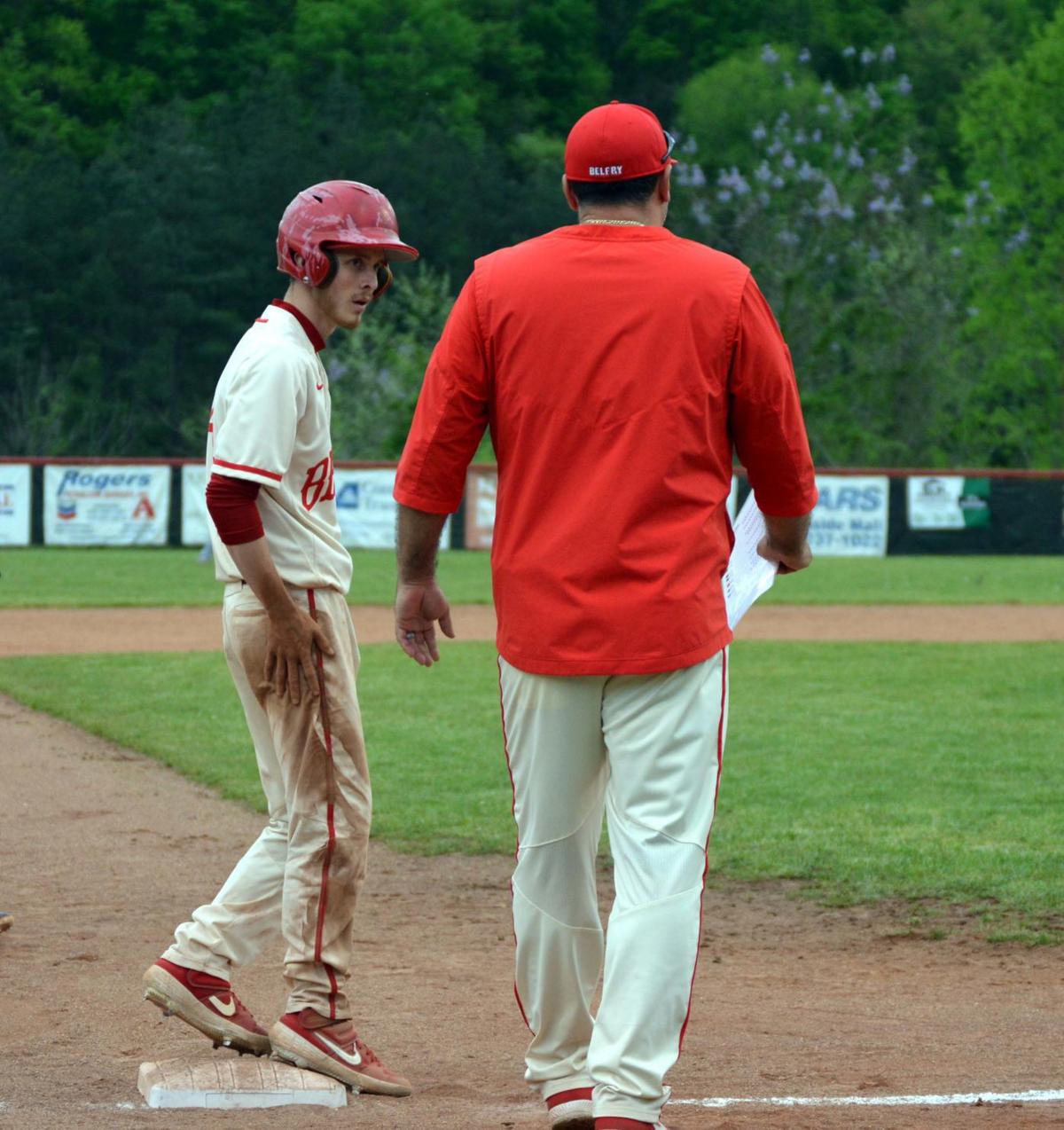 Belfry head coach Michael Hagy talks with senior Kaleb Taylor in a game during the 2019 season at the Massey Energy Baseball Complex at Belfry High School.

Belfry head coach Michael Hagy talks with senior Kaleb Taylor in a game during the 2019 season at the Massey Energy Baseball Complex at Belfry High School.

GOODY, Ky. — You never know what life is going to throw at you. One day can be a bed of roses, the next day can leave you wondering how you were struck with such misfortune.

The current pandemic known as COVID-19, or the “2019 Novel Coronavirus” is wreaking havoc on the entire planet, and in particular the sports world in the United States.

Professional sports leagues such as the NBA and NHL have suspended their respective seasons until further notice. MLB has put its season on hold. College basketball conference tournaments and the NCAA tournament itself were cancelled. Also, high school basketball state tournaments in Kentucky and West Virginia were not played.

The 2020 baseball campaign for head coach Michael Hagy and the Belfry Pirates was slated to begin on March 20, however, the virus has also cost them as well as high school baseball teams across the country to suspend their seasons, at least for the time being.

This is something that Hagy obviously didn’t see coming.

“We’re trying our best to stay positive,” he said. “We were two days away from playing our first game when all this happened, everybody was real excited about the season. We have four or five seniors returning that put a lot of hard work into this season, and for this to happen, to be totally out of our control, can’t do anything as a team, it’s kind of frustrating.

“We’re trying to go day by day with it and hope eventually that things start changing for the better and that we get some piece of the season, even if its just a small bit, especially for those seniors.”

The seniors on Hagy’s club, most notably infielder/pitcher Kaleb Taylor, first baseman/DH Sean Cochran, twins Adam and Austin Rahe, and outfielder John Ashurst were disappointed when announcement of the virus came out, according to Hagy. But he has confidence in them to keep working hard in the face of adversity.

“I’m sure they were in shock just like everybody else when it first came down,” Hagy said. “I know those guys. They’ll keep their bodies in shape, they’ll do what baseball activities they can on their own. Like I told everyone, you can’t get frustrated. It’s out of our hands, it’s easy to just be mad at the world, but you got to keep the big picture in mind, and even if we just get a month, you got to be ready once they say that you’re able to do what you can do.”

“I can’t imagine what they’re going through. They don’t have a next year. They were so excited about the season, we had a lot of good workouts and I liked where we were at that point, but it is what it is. It’s out of our hands. I’d say in the next couple weeks we’ll have a good idea even if there’s going to be a season.”

Coach Hagy said that if they are able to salvage part of the spring season in Kentucky that it will be the teams who stayed in shape during the layoff who see success in the shortened season.

“The good teams will be the ones who have kept themselves in shape and who have got out and thrown regularly with themselves and stuff like that,” he said. “The easy thing to do is just give up on it and sit around and do nothing. If we are allowed to play, then it’s just going to put us a lot longer to getting back in practice shape. You can’t just shut it down and then come back a month later. You have to re-get your arms in shape, and all of that stuff. It’s key if these guys are at home taking dry swings in their basement or whatever, they’ve got to keep their reps up, and I think our older guys will do that.”

With all the cancellations of the professional sports leagues and the college basketball tournaments, Hagy knew it was just a matter of time before the same thing would happen to his team, and he shared that message with them.

“I was like, well, it’s only a matter of time, we’re going to have to shut everything down,” he said. “I talked with our guys, and they kind of had an idea that it was possible. We had our last practice, a really good practice, and during that practice I told them that it is what it is, we’ll know more tomorrow, because they had already called off school for the next day, which was last Friday.”

“By the time I got to school that morning, we were already in the conference, and they said that effective immediately, during the dead period, I wasn’t even allowed to meet with my team and discuss all that. I kept them informed on what the commissioner had sent down. I sent it out to all our kids and said what they could do and couldn’t do. I told them to stay positive, and once I heard more I would get back with them.”

Despite the fact that they can’t practice as a team for the foreseeable future, he hopes that they take the initiative to perfect their craft at home.

“You just hope that they’re mature enough to know that, hey, even if it’s that I get out in my yard and throw the ball around or whatever they got to do, whatever they can with the resources they have to stay ready for the next three weeks, hopefully in the next three weeks we’ll be able to get that going,” Hagy said. “It’s tough for kids during this time. Once you’re older and a little more mature, you know kind of what you got to do to keep your body in shape. Kids are kids, and you don’t know if they’re staying up all night or all that. You can easily get out of shape really quick, and hopefully our kids are staying in shape and keeping focused.

Speaking of his playing days, Hagy played high school baseball at Williamson before going on to play on the collegiate level at Marshall. Hagy talked about how he would have reacted if something like this had happened back in those days.

“As much as I love sports and competing, and to be told that I couldn’t do it, I don’t know what I would have done,” he said. “I really don’t know what I would do because for years from kindergarten up, I was playing a sport around the clock, and I couldn’t imagine having to take a season off. I got my two kids who are at the middle school level, and I hate that they’re having to go through this. I know a lot of my players, especially the seniors, have the mentality I do, so I’m sure they’re chomping at the bit right now and wanting to get going.”

The United States, as well as the world, has fallen on hard times. It is easy to let a situation like this make you want to give up, but Hagy pointed out that winning the mental game would be key in a time like this.

“I was in shock for a week, most of us were. I’ve never been in this situation since going back to a player, going on 35 years to where there’s not been baseball. Kind of strange knowing that we would have already played two or three games by now, and there’s nothing we can do,” Coach Hagy said. “It’s not just us, everybody’s going through it. Hopefully in the next two to three weeks, things start heading in the right direction.

“This time right here will develop mental toughness more than anything. Baseball is such a mental game, and as long as we don’t let it defeat us mentally, and use this time the right way, hopefully good things will come from it. Hopefully these kids re-finish their careers and play and put the uniform on one more time.”

Taylor was tied for second on the club in hits last season with 36 while knocking in 24 runs and one home run for a battering average of .404. He was also a top pitcher on the mound for BHS.

Cochran notched 34 hits in 95 plate appearance a year ago while driving in 29 runs and netting an average of .358. Also returning for BHS is junior first baseman/pitcher Brett Coleman, who looks to once again be a key cog in the offensive attack for the red and White after leading the team in hits in 2019 with 43, as well as batting average, posting a .439 mark. and sophomore pitcher Wyatt Webb.

The Pirates had an overall mark of 20-10 in 2019 along with a 13-6 record in region play and a 4-1 mark in district contests, seeing their season end in the semifinals of the 15th Region Tournament. If the 2020 season is played, it will be Hagy’s 18th season at the helm for Belfry Baseball.