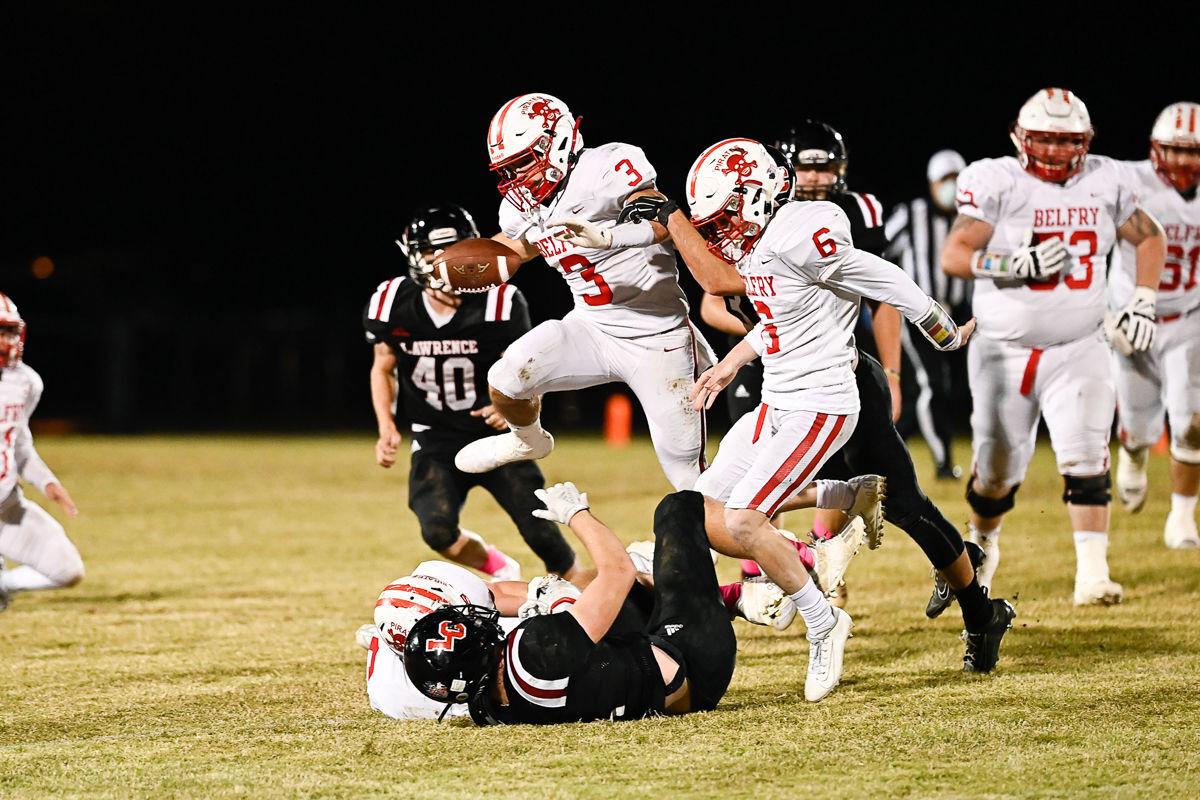 Belfry running bac Isaac Dixon hurdles over a Lawrence County defender who is lying on the ground while Kyle Webb (6) runs beside him in the Pirates 36-0 win over the Bulldogs on Friday in Louisa, Kentucky. 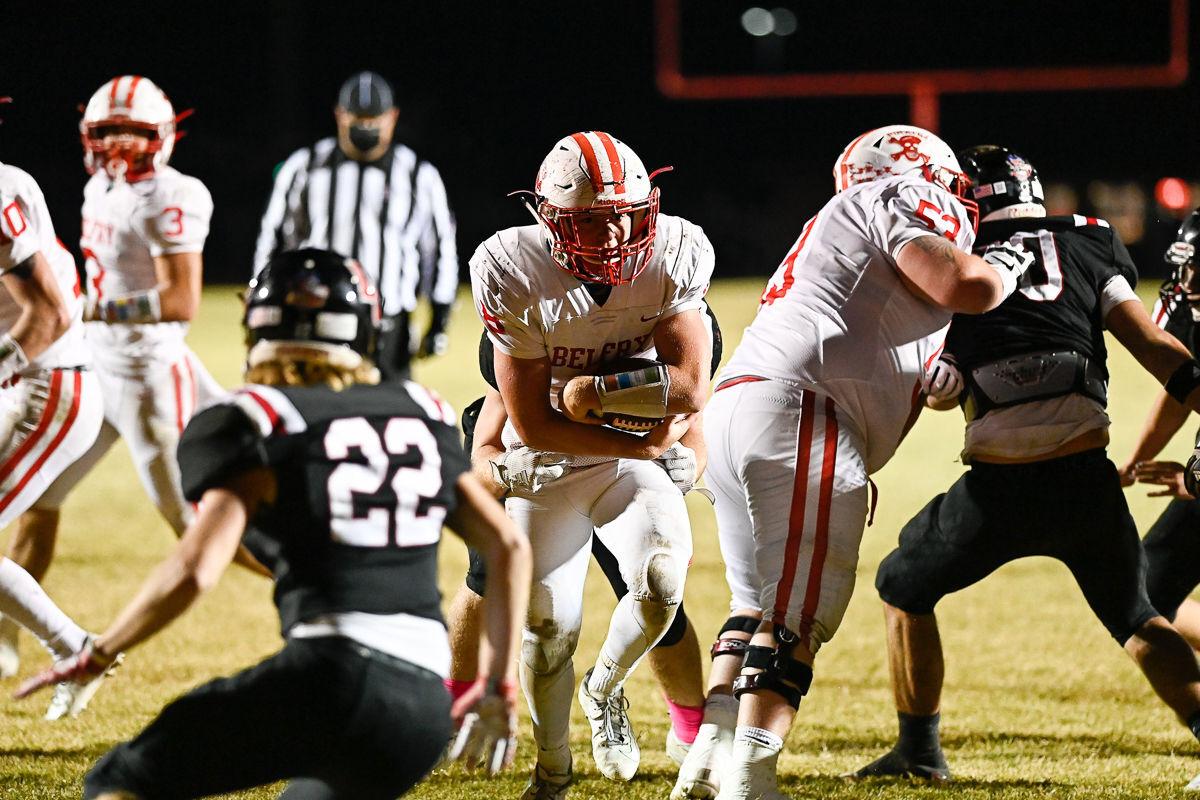 Belfry sophomore Neal Copley runs for a late touchdown while senior lineman Logan McCoy holds his block in the Pirates 36-0 win over Lawrence County on Friday in Louisa, Kentucky.

Belfry running bac Isaac Dixon hurdles over a Lawrence County defender who is lying on the ground while Kyle Webb (6) runs beside him in the Pirates 36-0 win over the Bulldogs on Friday in Louisa, Kentucky.

Belfry sophomore Neal Copley runs for a late touchdown while senior lineman Logan McCoy holds his block in the Pirates 36-0 win over Lawrence County on Friday in Louisa, Kentucky.

LOUISA, Ky. — The reigning Class AAA State Champion Belfry Pirates got back to their winning ways this past Friday night as they shut-out district foe Lawrence County 36-0 in a game played at Luke Varney, Jr. Memorial Stadium.

The Pirates (4-2) made easy work of the Bulldogs on the first crisp Friday night o the football season as they “Big Red” defense pitched its first shutout of the 2020 season.

Belfry held Lawrence County (2-1) to only 158 yards of total offense on the night as they forced the home squad to punt the ball four times and turn the ball over on downs two times in the first half alone.

The Pirates and longtime head coach Philip Haywood once again rode the legs of senior running back Isaac Dixon as the Kentucky Mr. Football candidate posting another strong performance.

Dixon ran the ball 10 times for 141 yards against the Bulldogs and reached the end-zone three times on runs of 20, 19, and seven yards.

The playmaker now has topped 1,000 yards rushing in only six games of the 2020 season. On the year he has carried the ball 78 times for a total of 1,065 yards and 14 rushing touchdowns.

He has also returned a kickoff for a touchdown and caught two touchdown passes for 17 total touchdowns on the season.

Senior QB Brett Coleman, who is committed to D1 Miami (Ohio), nearly reached 100 yards for the second straight game as he totaled 87 yards rushing and a touchdown on just eight carries.

The Pirates outgained LCHS 324 to 158 in total yards on the night, with all 324 yards coming on the ground behind the massive Belfry offensive line.

Running back Dylan Ferguson was the lone bright spot in the game for Lawrence County as he was able to amass 111 yards rushing on 18 carries.

The win for Belfry was the 21st consecutive win over the Bulldogs dating back to 2002 and the Pirates now have a 26-9 record all-time in the matchup.

BHS now turns their sites to another district foe this Friday night in the form of the Pike Central Hawks. The Hawks enter play with a 3-3 record and is coming off a win in a shootout against Magoffin County 82-52.

Pike Central sophomore running back Matt Anderson broke a Kentucky state record in the win over the Hornets as he scored nine touchdowns on the ground.

Anderson ran the ball 30 times for 409 rushing yards in the game last week alone and now has 1,075 rushing yards and 16 touchdowns on the season.

The matchup between Dixon for Belfry and Anderson for PCHS pits two of the top backs in Class AAA against one another and fans in attendance will be guaranteed to get their moneys worth.

Pike Central has ran for 2,826 yards in only six games in 2020 while the Belfry defense has only allowed 1,066 yards via the ground in their six contests.

On the flip side, Belfry has rushed for 1,808 yards on the season while the PCHS defense has allowed 1,308 yards rushing.

Due to the current COVID-19 situation in Pike County, the game with the Hawks could end up being postponed or cancelled. Fans can keep up with the status of the game by checking the Williamson Daily News online sports section for updates.

If the game is played on Friday night, kickoff is scheduled for 7:30 p.m. at Haywood Stadium. Coach Philip Haywood will be looking to add to his Kentucky state record for most wins in his career as he seeks win No. 454.