The Tug Valley Panthers pose with their hardware after winning the 20th Sectional Championship in school history by defeating Van by a final score of 65-56 in the Region IV Section II Championship game on March 6 in Hurricane. 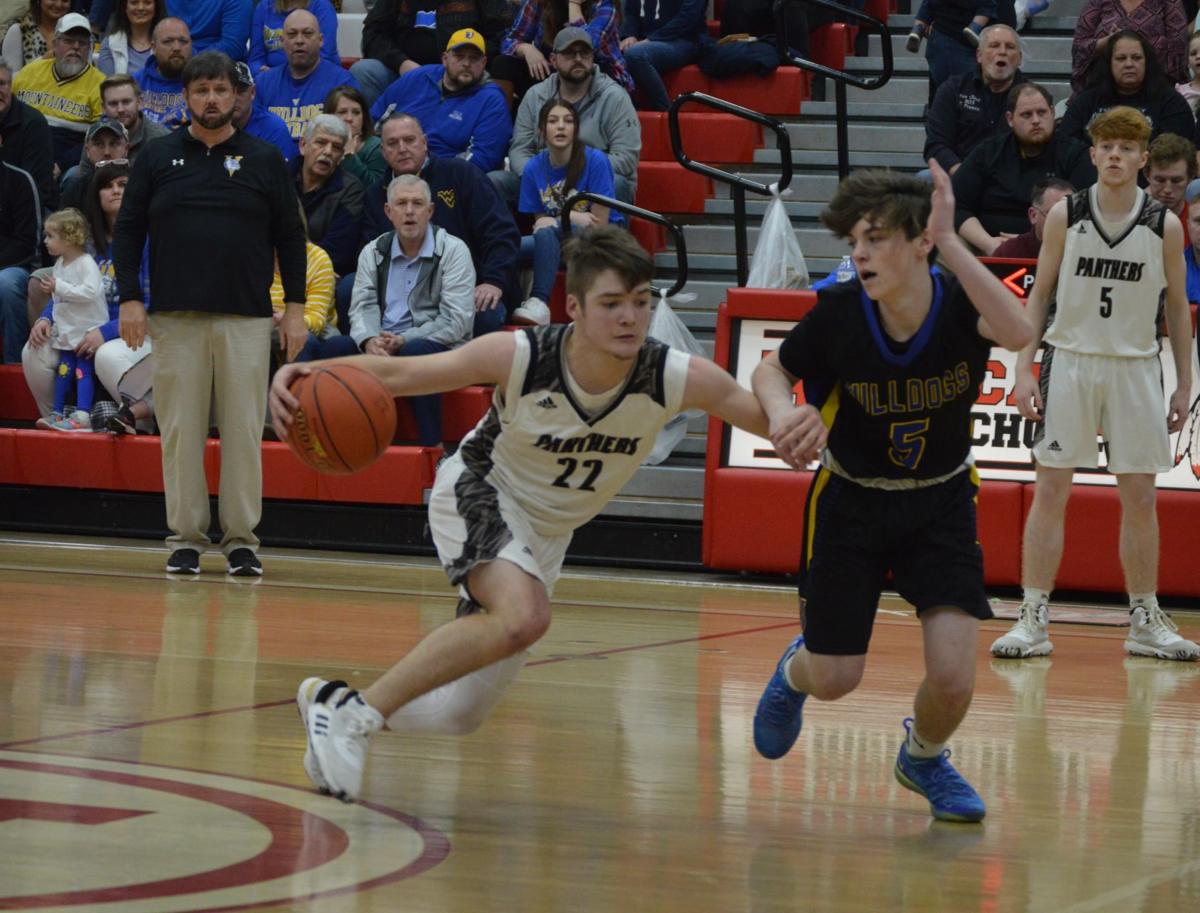 The Tug Valley Panthers pose with their hardware after winning the 20th Sectional Championship in school history by defeating Van by a final score of 65-56 in the Region IV Section II Championship game on March 6 in Hurricane.

HURRICANE — The No. 1 seed Tug Valley Panthers took care of business in the Region IV Section II championship game at Hurricane High School on Friday night as they jumped ahead to a big lead over No. 6 seed Van and held on for the 65-56 win.

The win secures a home game for Tug Valley (12-12) in next week’s Region IV Co-Final as they will play Parkersburg Catholic (15-9) at 7 p.m. on Wednesday with a berth in the Class A State Tournament on the line.

Tug Valley head coach Garland “Rabbit” Thompson preached after the win the importance of securing a game in Naugatuck during the Regional round, where the Panthers are 6-0 in since the inception of the Co-Regional format in 2010.

“It’s critical for us, it’s critical. We’re a different beast when we play at home now, especially in March,” Thompson said. “Now we’ve still got to come out Wednesday and prove it. Because Parkersburg Catholic will be coming down off a loss with a little bit of a gut-check thinking they can win it. We’ve got to really play ball on Wednesday, but we’re still in it. We survive and advance.”

Van, who entered the postseason with a 4-18 record, was the surprise team of the tournament as they upset No. 3 seed Huntington St. Joe and No. 2 seed Tolsia in the first two rounds to set up the showdown with the Panthers.

Despite the loss, the Bulldogs (6-19) will keep their Cinderella run alive as they will play for a berth in the Class A State Tournament on Wednesday at No. 1 Williamstown (23-1) in a 7 p.m. tip. Van head coach Dave Gogas was thrilled with his team’s effort throughout the sectional tournament and says his team is ready to get to work and try to advance to the Charleston Coliseum and Convention Center.

“I told these guys in here after the game I said ‘Hey, we’re four quarters away from reaching our goal which is to make it to Charleston and anything can happen once you get up there,” Gogas said. “I got a chance to watch Williamstown earlier this year at Tug Valley and Tug had a chance to beat them, it came down to the final shot…We can compete with them (Williamstown). We just have to buckle down and go to work here these next couple days and get ourselves refocused.”

Tug Valley was led by talented junior guard Caleb May on the night as he poured in a game high 30 points on 11-14 shooting, including 4-5 from three-point range all in the first half. Fellow junior Ian Reed joined him in double-figures as he finished with 16 points, including a perfect 3-3 from deep, while also grabbing five rebounds.

“Caleb (May) carried us, especially in that first half. He’s our catalyst,” coach Thompson said. “I thought Joby (Sorrell) came in there and did some good things off the bench and Ian (Reed) was hot tonight, he played very well too. They out-rebounded us a little bit there at the end and we missed some foul shots there late but all-in-all when you win in the postseason you have to be happy with it.”

Sorrell contributed six points and five assists for Tug Valley while big-men Easton Davis and Ethan Colegrove scored six and four respectively. Matthew Linville scored a bucket and Zach Savage sank a free-throw to round out the scoring for TVHS.

Van was led by leading scorer David Stewart who came in averaging just over 17 points per game and surpassed that mark, as he dropped 23 on the night. Stewart struggled from the floor as he only made 7-24 field goal attempts but sank 7-8 shots from the charity stripe.

Hunter McMicken and Jacob Jarrell joined him in double-figures as they scored 12 each, while Austin Javins added six points and grabbed 12 rebounds. Freshman Shaun Booth finished with three-points to round out the scoring for the Bulldogs.

The two teams came out and played a competitive first quarter to start the game as Tug Valley led 13-9 after the first eight minutes of play. Tug Valley jumped ahead to a 22-14 lead early in the second quarter after an and-one by Reed, but the Bulldogs cut the lead back to five at 22-17 after a long three by Jarrell.

The Panthers then took control of the game as they went on a 13-3 run to end the first half aided by a pair of threes from May and a long ball by Reed to take a 35-20 run into the halftime locker rooms.

Tug Valley led by as much as 16 at 45-29 early in the second half but Van never quit battling as they trimmed the lead down to seven multiple times in the fourth quarter but could not get any closer, as the silver-and-black took another sectional championship back to Naugatuck.

“We dug ourselves in a hole early, we couldn’t hit our shots,” coach Gogas said following the loss. “But a great effort by our kids, I’m proud to death of them. Hats off to Tug Valley, they are a very classy team and the May kid is outstanding. Caleb May is awesome. He improves every game, every time I see him play and he’s a great kid. He killed us; we had no answer for him. He got to the rim when he wanted to, it seemed like he didn’t miss a shot. He was the difference in the game. “

This will be the third consecutive season that the two teams have met in the Region IV Co-Final, as Tug Valley won 84-41 in Naugatuck in 2018 and Parkersburg Catholic won 59-53 in Parkersburg a year ago.

Van will be appearing in a Region IV Co-Final for the third time since 2016 but have went 0-2 in the previous two contests.