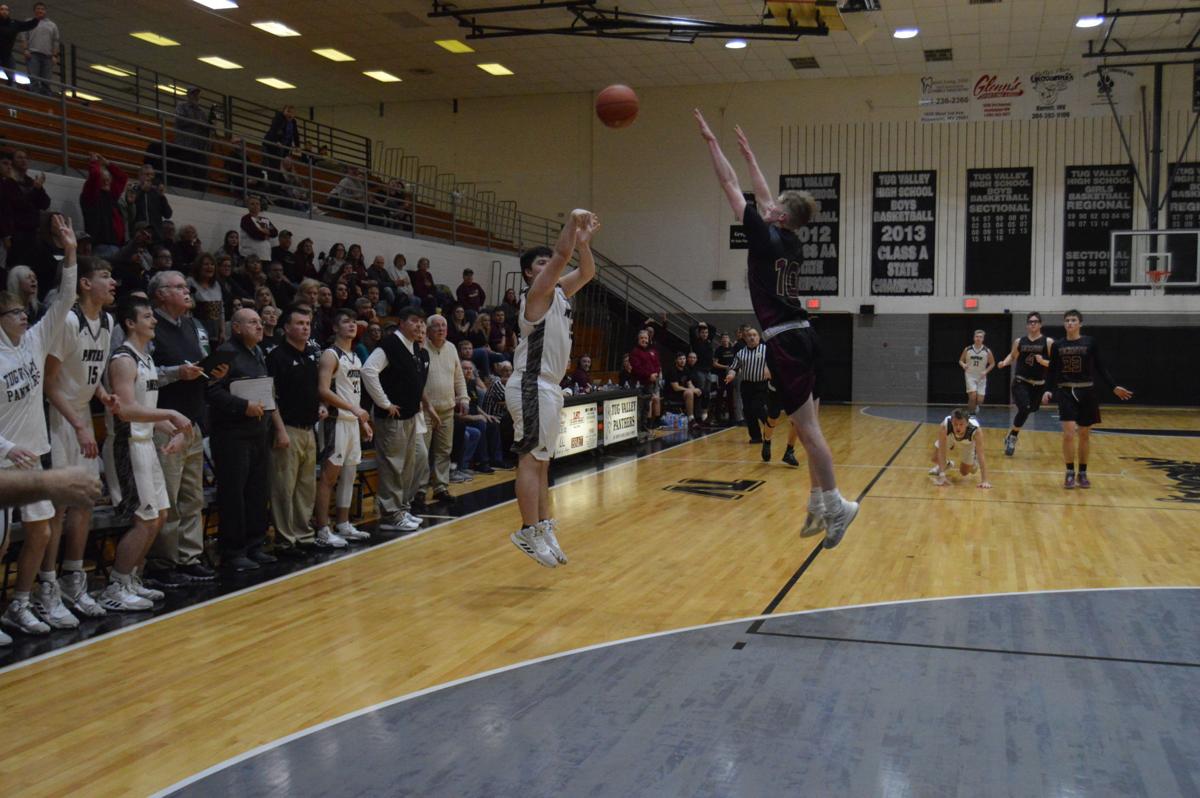 Tug Valley’s Zach Savage fires up a deep three at the buzzer that would have won his team the game during the Panthers 51-49 loss to the Yellowjackets on Feb. 7 inside the TVHS Gymnasium. 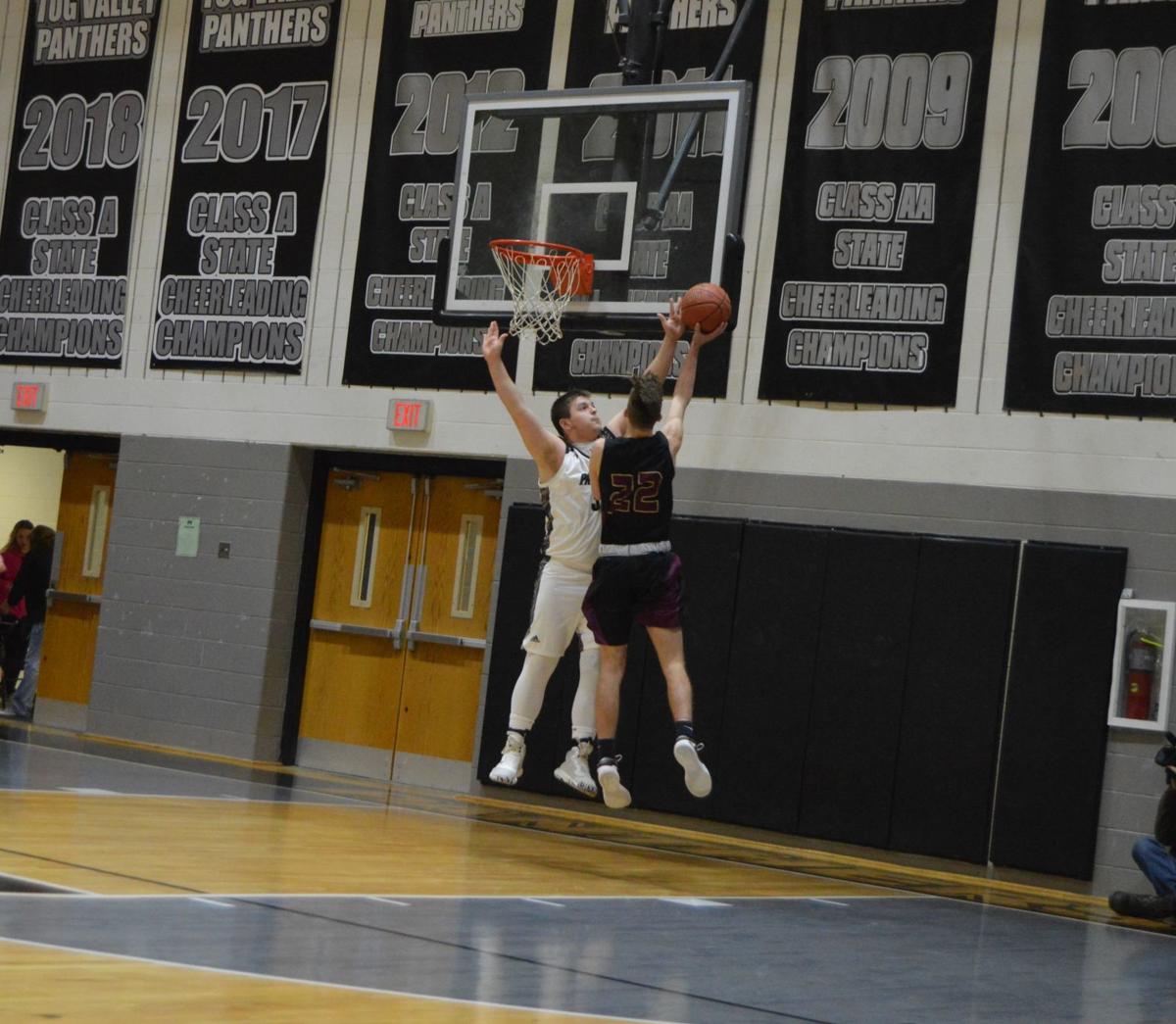 Tug Valley’s Ethan Colegrove blocks the shot of Williamstown’s Eli Inman during the Panthers 51-49 loss to the Yellowjackets on Feb. 7 inside the TVHS Gymnasium. 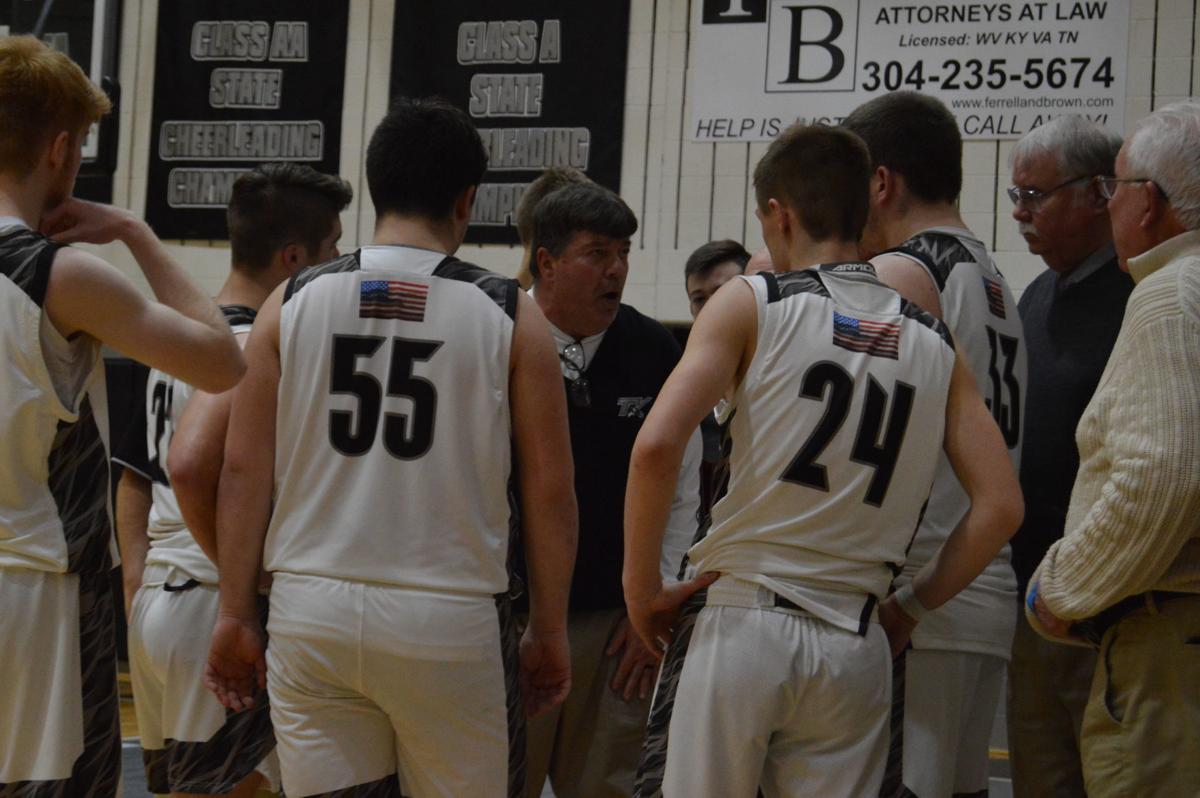 Tug Valley head coach Garland "Rabbit" Thompson barks out orders to his team in a timeout late in the game during the Panthers 51-49 loss to the Yellowjackets on Friday, Feb. 7, 2020 inside the TVHS Gymnasium.

Tug Valley’s Zach Savage fires up a deep three at the buzzer that would have won his team the game during the Panthers 51-49 loss to the Yellowjackets on Feb. 7 inside the TVHS Gymnasium.

Tug Valley’s Ethan Colegrove blocks the shot of Williamstown’s Eli Inman during the Panthers 51-49 loss to the Yellowjackets on Feb. 7 inside the TVHS Gymnasium.

Tug Valley head coach Garland "Rabbit" Thompson barks out orders to his team in a timeout late in the game during the Panthers 51-49 loss to the Yellowjackets on Friday, Feb. 7, 2020 inside the TVHS Gymnasium.

NAUGATUCK — Coming into their game at Tug Valley on Friday night, No. 1 ranked Williamstown had rolled through their first 17 opponents winning every game by at least 11 points or more.

That changed in Naugatuck as the home standing Panthers gave the Yellowjackets all they could handle, as the game came down to the final second.

The Panthers (7-11) trailed by two after Williamstown guard Xavier Caruthers connected on two clutch free throws to give his team a 51-49 lead with 3.4 seconds to play.

With point-guard Caleb May fouling out after he committed his fifth foul against Caruthers, Tug Valley had to inbound the ball to Ian Reed after the second free-throw.

The junior guard quickly made a good look-ahead-pass and found sophomore Zack Savage open on the right wing and he let a three fly just before the horn sounded, but it clanged off the back iron as the visiting Jackets held on for the two-point win and improved to 18-0.

“That was a fight out there, it was a war tonight I tell you,” Tug Valley coach Garland “Rabbit” Thompson said following the loss.

“They came in here at 17-0 and I thought out kids played very good tonight, we just came up a little short. We’ll learn from it, we’ll get better. There’s bigger fish to try than this, the tournament is right around the corner. “

The win for TVHS would have been their second upset victory in the same week as they traveled to Miner Mountain and knocked off the No. 9 ranked team in Class AA in Mingo Central on Tuesday by a final of 57-47, avenging an earlier season loss to the Miners in Naugatuck. More on that game later.

The Panthers came out of the gate on Friday and stood toe-to-toe with Williamstown and led 8-7 after a bucket on the baseline by junior Easton Davis. The Jackets then went on a 8-0 run to take the largest lead of the game by either team at 15-8.

Coach Thompson called a timeout to halt the Yellowjacket run as TVHS was able to trim the lead back to two at 18-16 going into the second quarter.

The Panthers continued to claw their way in the second stanza and took the lead back at 26-24 on a layup by Caleb May with 3:52 left in the half. Both teams went cold the rest of the quarter as Williamstown’s Samuel Cremeans would score a bucket before the end of the quarter to send the game to the break knotted up at 30 apiece.

The two squads continued to go back-and-forth in the second half as they traded the lead six times in the third quarter alone, but it was Williamstown who ended the quarter on a 5-0 run to take a 43-39 lead into the fourth.

After extending the lead to 45-39 to start the fourth quarter, the black-and-silver went on a 6-0 run to knot the game back up at 45 on a putback by sophomore Ethan Colegrove with 4:25 to play.

A bucket by Cremeans that gave the Jackets the 47-45 lead with just under four minutes to play would be the last field goal for either team, as the only points scored for the rest of the contest would come at the foul line.

Two foul shots by junior Ian Reed with 3:37 to play tied the game back up at 47, and then Williamstown took the lead back at 49-47 after Cremeans and Eli Inman split a pair of free-throws.

Tug Valley then knotted the game back up for a final time with 34.9 seconds to play when Caleb May was fouled by Williamstown big man Colton Luther and calmly sank both free-throws.

With the game tied at 49, the Jackets were attempting to hold the ball for the final shot but lost the handle after Reed stepped into a passing lane. During the scramble for the loose ball, a foul was called on May for Tug Valley which sent guard Garrett Hill to the line for two shots with 13.9 seconds to go.

Hill would miss both foul shots but then made up for it by stealing the ball from May as he brought the ball up the court. Hill then dished it to Caruthers who was fouled by May and then sank both free throws to win the game.

“This was a tournament type atmosphere here tonight,” coach Thompson said. “Williamstown is very, very good. They are big and they are athletic. But I thought we played them tic for tack.”

The Panthers had a balanced attack against the Jackets as they only had one player land in double-figures but saw six players net six or more points.

Davis led the Panthers with 13 points, 12 coming in the paint, on 6-9 shooting. Reed was next on the score sheet with eight points while sophomore Matthew Linville also chipped in eight points in only 10 minutes of action off the bench.

May and Savage each netted seven points apiece for Tug Valley and Savage led the team in assists with four. Colegrove rounded out the scoring column with six points and led the team by grabbing nine boards, including four on the offensive end.

Williamstown was carried to victory by two players as Cremeans scored a game high 23 points to lead them and Caruthers was right behind him with 20. They combined for 43 of the teams 51 points.

The loss for Tug Valley drops them to 7-11 on the season and was their 10th loss to a team that is currently or has been ranked in either the Class A or Class AA AP Polls at some point this season.

The Panthers are back in action at home on Tuesday night in sectional contest against Huntington St. Joe. Tip-off is set for 7:30 p.m. Tug Valley then hits the road on Thursday night at Van for another sectional contest, before taking an eight day break between games.

TUG VALLEY 57 MINGO CENTRAL 47: The Tug Valley Panthers made the trek to Miner Mountain on Tuesday, Feb. 4 and avenged an earlier season loss to in-county rival Mingo Central as they picked up a 57-47 road win.

The Miners jumped ahead to an early 8-4 lead after a pair of quick threes by senior Drew Hatfield, but the Panthers went on a 13-4 run to end the first period leading 17-12.

The home standing Miners clawed away at the Tug Valley lead and trimmed it all the way back to one at 24-23 late in the second quarter, but the Panthers got a bucket by Ian Reed to push them back ahead by three at 26-23 going into the halftime locker rooms.

Coming out of the break, coach Garland “Rabbit” Thompson’s club took full control of the game as they locked Mingo Central down on the defensive end holding them to only seven points.

TVHS scored 17 points in the third quarter, led by seven by Caleb May and five by Reed, to push their lead to its largest margin at 43-30 going into the fourth.

In the third quarter, Drew Hatfield had to be sent to the bench with foul trouble as he picked up three personal fouls in the period alone. He was called for a technical late in the third for shoving May after a play.

Drew’s younger brother Devin came alive in the final eight minutes and scored 12 of his team high 16 points to keep his team around, but it was not enough as Tug Valley went 8-10 from the charity stripe in the fourth to secure the 10-point win.

Reed and May had their way for Tug Valley against the Miners as they were able to drive into the paint at will and create a shot for themselves or dish it off to a teammate. Reed led the Panthers with a game high 20 points and May was right on his heels with 19 points and three steals.

Big man Easton Davis followed them with nine points as he just missed landing in double-figures while Ethan Colegrove scored four, Joby Sorrell added three, and Zach Savage rounded out the scoring with two. Colegrove led the way for TVHS with nine rebounds

Devin Hatfield led coach Stan Elkins club with 16 points while his brother Drew Hatfield was right behind him with 14. Drew scored all but three of his 14 points in the first half.

Josh Wellman, Jarius Jackson, and Nathan May each tallied four points in the score book while Colton Blankenship added three and Jacob May finished with two to round out the scoring.

The Panthers lived at the charity stripe against MCHS hitting 19-24 shots for 79 percent while the Miners hit 5-7 attempts.

The win for Tug Valley improves them to 15-3 all-time against their cross-county foe since Mingo Central opened its doors in 2011.