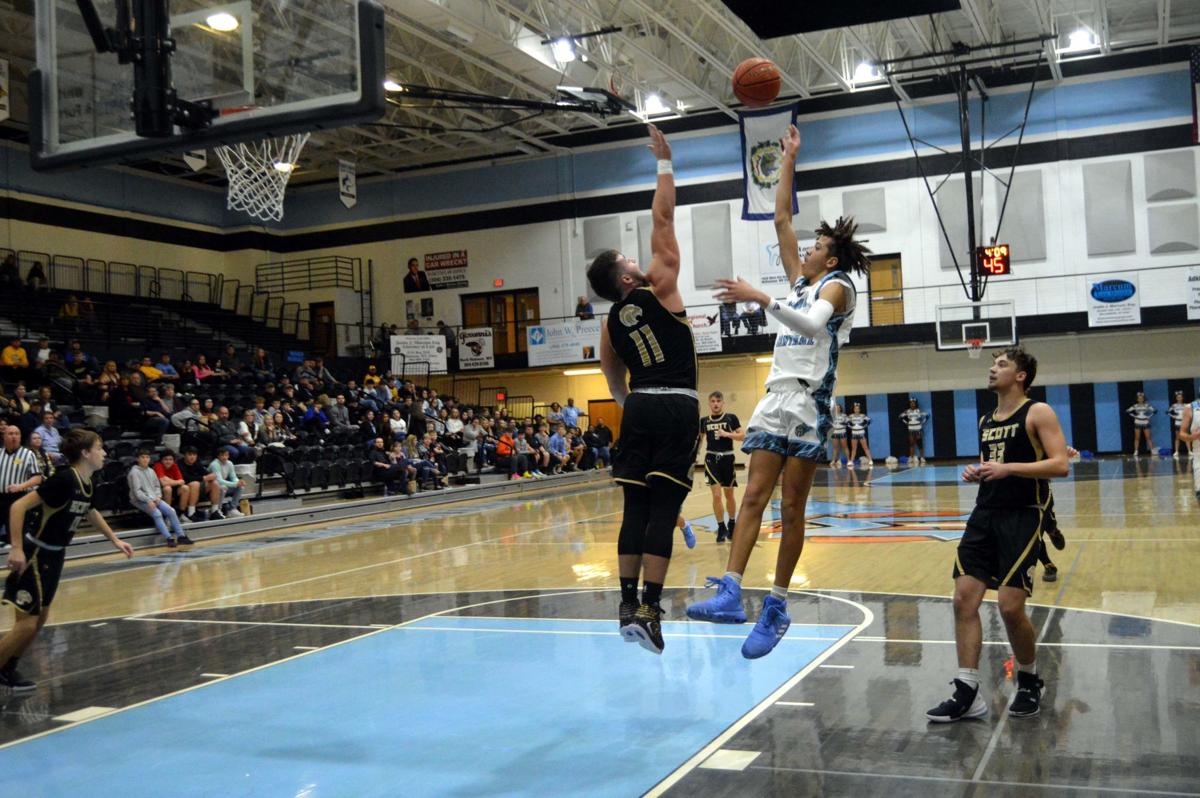 Mingo Central sophomore Jarius Jackson floats a shot over Scott big man Jagger Bell in the Miners’ 79-75 win over the Skyhawks on Friday inside the MCHS Gymnasium. 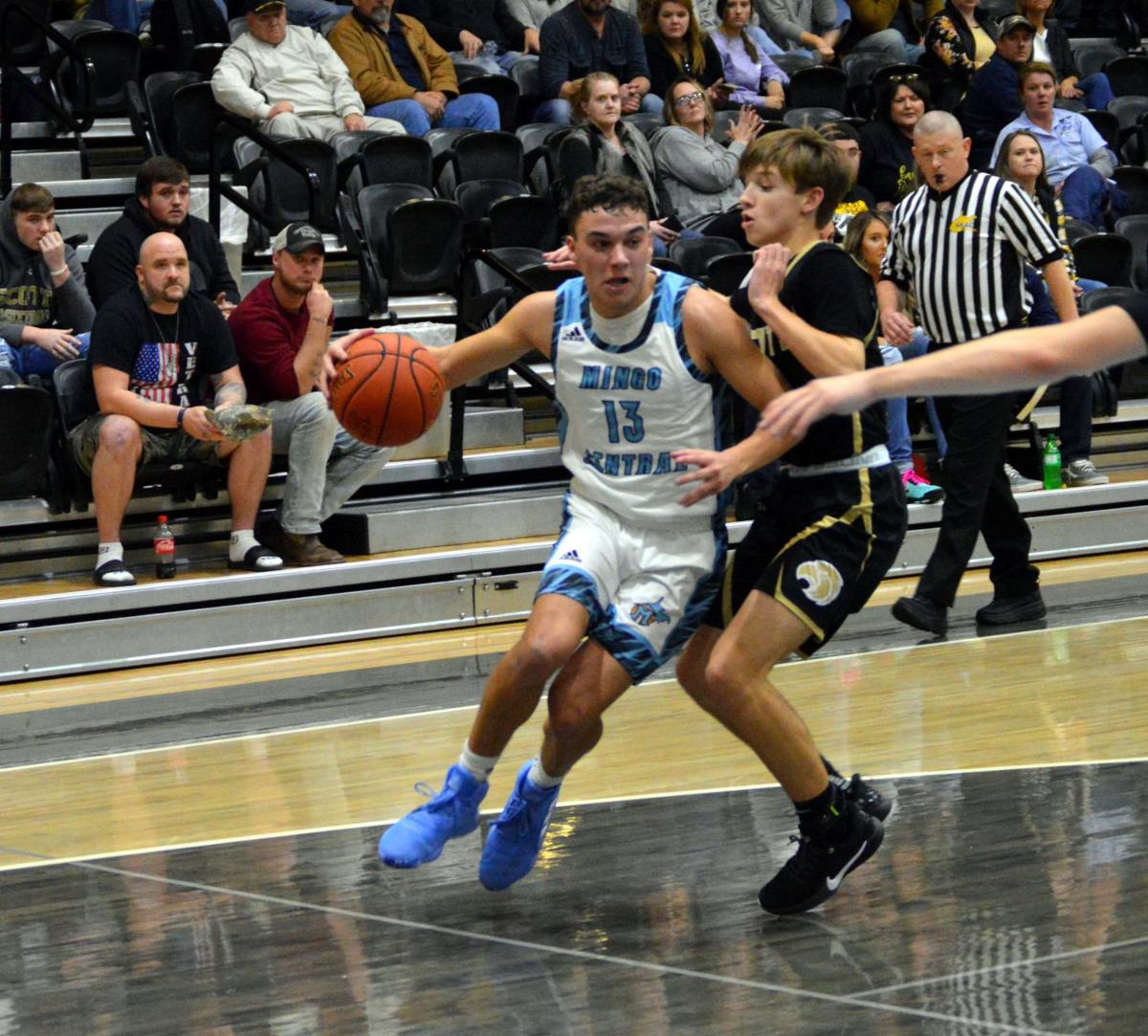 Jarrid McCormick/Williamson Daily News Mingo Central senior guard Drew Hatfield takes a Scott defender off the dribble during the Miners 79-75 win over the Skyhawks on Friday, Dec. 13, 2019 inside the MCHS Gymnasium.

Mingo Central sophomore Jarius Jackson floats a shot over Scott big man Jagger Bell in the Miners’ 79-75 win over the Skyhawks on Friday inside the MCHS Gymnasium.

Jarrid McCormick/Williamson Daily News Mingo Central senior guard Drew Hatfield takes a Scott defender off the dribble during the Miners 79-75 win over the Skyhawks on Friday, Dec. 13, 2019 inside the MCHS Gymnasium.

NEWTOWN — The Mingo Central Miners picked up a win in their season opener on Friday night as they topped sectional foe Scott by a final score of 79-75 inside the MCHS Gymnasium.

It was a complete 360 degree turn from what occurred in the season opening game a year ago against Scott when the Skyhawks clobbered the Miners 81-47 in the first game of the Stan Elkins era.

Now by picking up a win against a Scott team that won 14 games a season ago, the Miners proved that they are going to be a different team in the second season of the Elkins era.

“We struggled all of last year, this is a really big win for our program and what we are trying to do here,” Elkins said following the win. “We’ll take these ugly wins, we are a team that hasn’t played together and we are still learning how to win. And we were able to do that tonight.”

The two teams started off the game going back-and-forth as the Miners held a slim 6-5 advantage early in the first before going on a mini spurt and extending the lead to 11-5 after three by Drew Hatfield and a layup from Jarius Jackson.

The Skyhawks (1-1) then went on their first run of the game however as they outscored Mingo Central 13-2 over the next few minutes of action thanks to buckets from Jagger Bell, Gavin Cooper, and Caleb Dingess and took a 18-13 lead in the closing seconds of the first.

The Miners got a shot to fall from Jackson late in the final seconds however and Scott took a 18-15 lead into the second period.

Scott took their largest lead of the game early in the second quarter at 24-17 after back-to-back buckets from senior Jon Jon Hamilton but the Miners answered with an 8-0 run to snatch the lead back at 26-24.

The run was fueled by a three from Colton Blankenship and buckets from Jacob May and Ethan Evans off the bench. Also during the 8-0 run, Bell was T’d up for Scott resulting in two free throws for Drew Hatfield.

The two teams were even in the final minutes of the half and were knotted up at 35 apiece when Scott’s Cavin White was fouled with less than two seconds two play while shooting a three. He hit 2 of 3 from the line and the Skyhawks took a 37-35 lead into the break.

Coming out of the halftime locker rooms coach Elkins club wasted no time taking control of the tempo as sophomore Devin Hatfield got hot after a scoreless first half.

Devin scored 12 points in the first five minutes of action including a trio of 3s to help the Miners go on a 16-4 run to start the half and grab a 51 to 41 lead.

After another three pointer from Hamilton cut the Mingo Central lead down to seven at 54-47, the Miners got buckets from Nathan May and Jackson on nice assists by Josh Wellman in the final minute to take a 58-47 lead into the fourth.

After a scoreless third period, Drew Hatfield had the hot hand once again in the fourth as he scored eight points in the first four minutes of the period to help Mingo reach their largest lead of 69-54 with 4:12 to go in the fourth.

To make matters worse for coach Shawn Ballard’s club, their star big man fouled out on a charging call with 3:54 to play. The Skyhawks never quit battling however and capitalized on some mistakes by the Miners in the final minutes of the game to claw within four with 22 seconds to play, but they could never get any closer as Mingo Central held on for the season opening victory.

MCHS was led in scoring on the night by the senior Hatfield as he scored 28 points in the game, including 13 in the fourth quarter. Drew shot 9-13 from the charity stripe including 7-8 in the final quarter to help seal the win.

Jackson followed him with 17 points including an eight point first quarter to help the Miners get off to a hot start while Devin Hatfield joined them in double-figures with 14, all in the second half.

Junior guard Colton Blankenship just missed double-digits with nine points including 3-3 from the charity stripe and a pair of 3s.

“We knew we had to rebound the basketball and get out and run the ball,” Elkins said. “We knew they were going to press us, I think our press break worked early and then they (Scott) got accustomed to what were doing and gave us fits. They showed what a great team they have, they are tenacious and fight to the end. But we’ve got some shooters and we spread the floor, it’s hard for some guys to come out and guard us. So as long as we make shots we’ll be alright.”

Scott landed four players in double-figures and was led by Caleb Dingess’ 20 points, including 11 in the 4th quarter. Hamilton followed him with 16 while sophomore Landon Stone was right behind him with 15.

Bell could never get going for the Skyhawks despite having a size advantage against a guard led Mingo Central squad as he battled foul trouble and finished with 11 points before fouling out late in the game.

For the contest the Miners shot 16 of 20 from the charity stripe while the Skyhawks only hit 13 out of their 23 shots. Mingo Central drilled seven 3s as a team while Scott connected on five.

The loss for Scott dropped them to 1-1 on the young season as they defeated Lincoln County in their season opener on Tuesday, Dec. 10. They play Logan next on Tuesday in Madison.

Mingo Central sees their record move to 1-0 after the win and is set to be back in action on Tuesday at home against Winfield. Tip is set for 7:30 p.m.