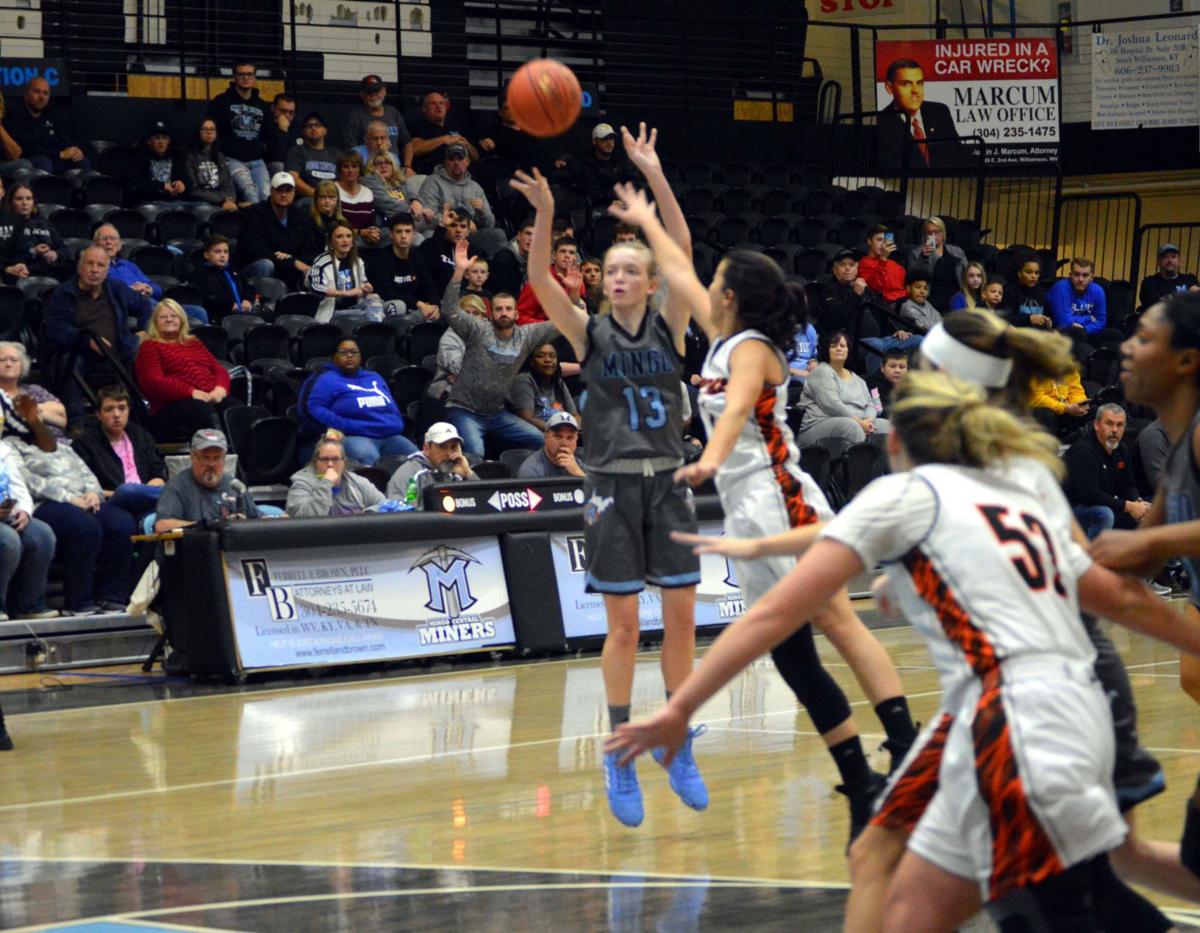 Mingo Central’s Scarlette Thomason drills a three to tie the game up at 59 in the fourth quarter of the Lady Miners’ 67-64 win over Chapmanville on Wednesday. 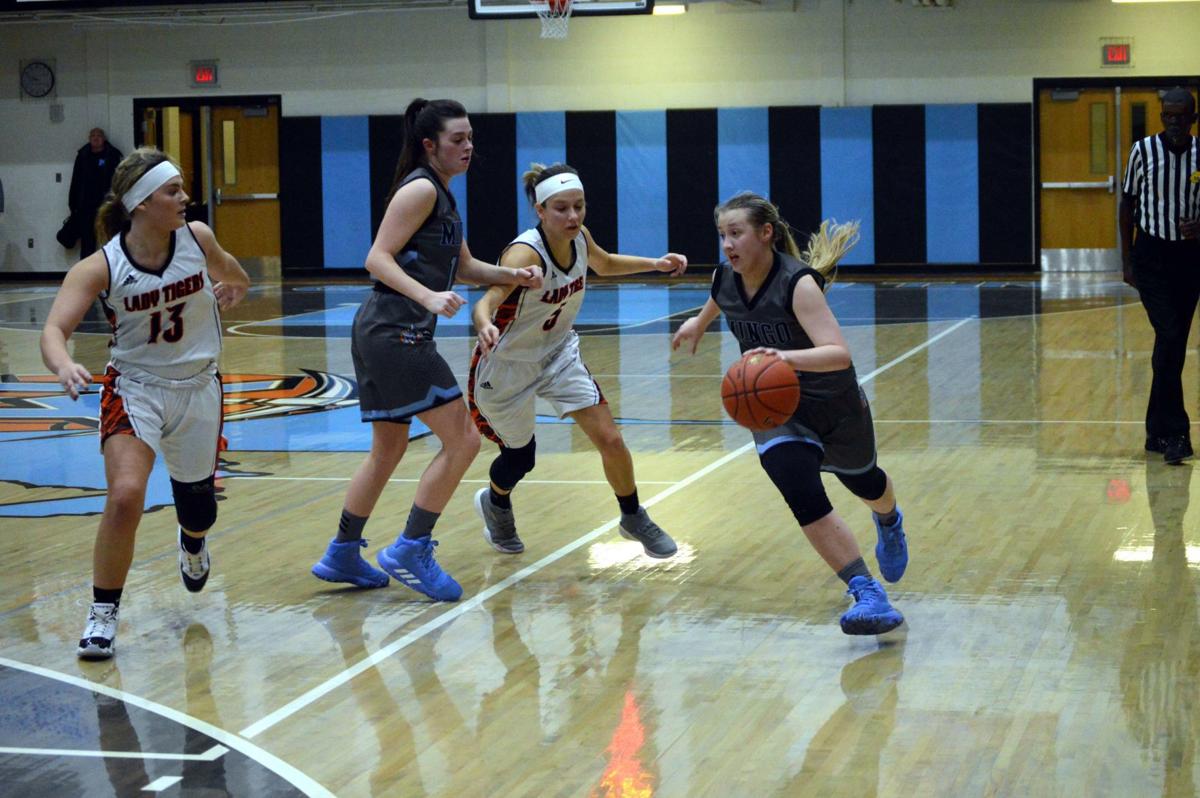 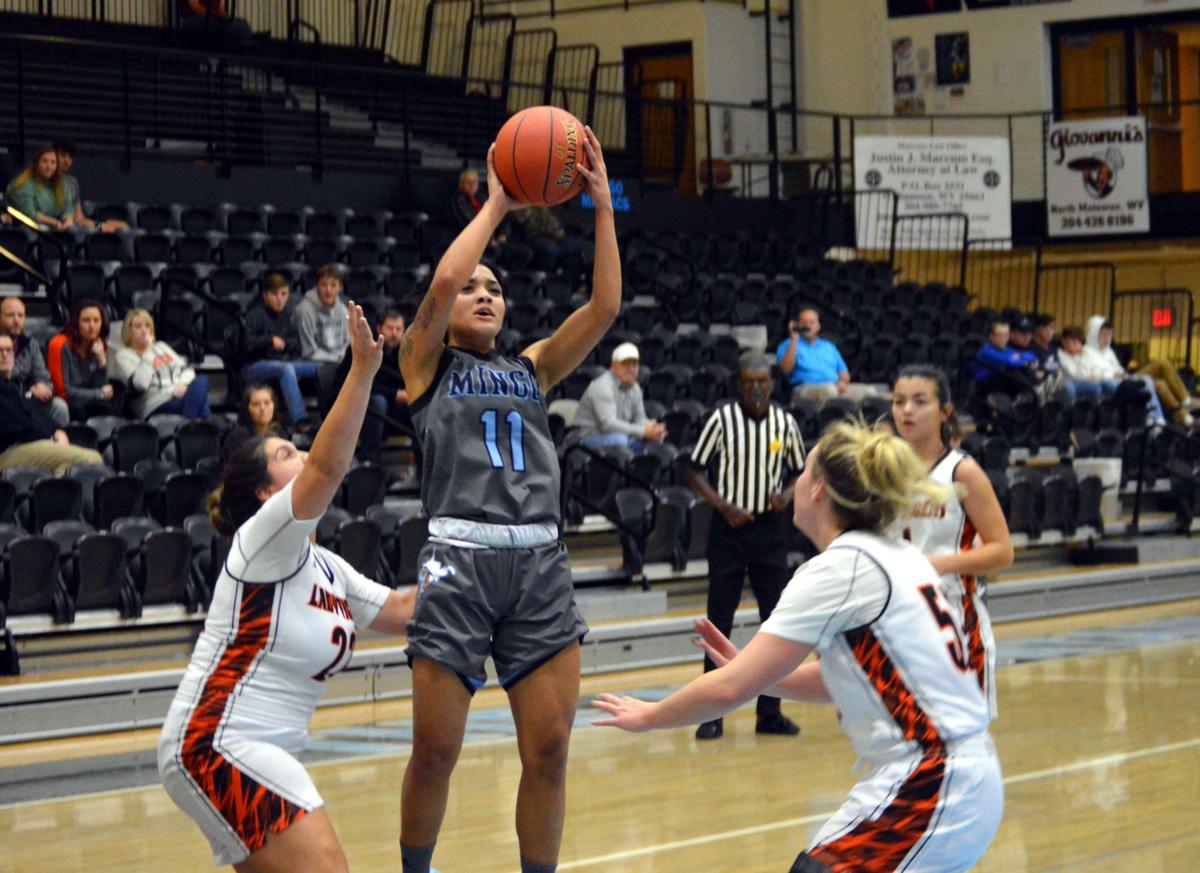 Mingo Central’s Scarlette Thomason drills a three to tie the game up at 59 in the fourth quarter of the Lady Miners’ 67-64 win over Chapmanville on Wednesday.

NEWTOWN — The Mingo Central Lady Miners continued their hot start to the new season on Wednesday night as they rallied from 22 points down against sectional foe Chapmanville to win by a final score of 67-64 inside the MCHS Gymnasium.

The Lady Miners (2-0) were trailing by one at 64-63 after Graci Brumfield’s runner with 1:48 to play gave Chapmanville the lead, and first year coach Kim Davis-Smith called a timeout knowing her team needed a bucket.

Coming out of the timeout, Davis-Smith drew up an in-bounds play for senior Ziah Rhodes and she delivered as she flipped in two of her 22 points with 1:25 left in the game to give Mingo Central the 65-64 lead.

The Lady Tigers (3-2) had a couple of chances to score in the final 85 seconds but could not convert and had to foul to extend the game.

Junior point guard Jenna Wagoner came up clutch for the second game in a row as she hit two big free throws to push the lead to 67-64 with 13.1 seconds to play.

Chapmanville shot a three to tie it in the final seconds but it was off the mark, and the Lady Miners secured the three point victory.

“It’s kind of been our mantra since sine the preseason to just be relentless,” Davis-Smith said after the win. “When things aren’t going your way, because life doesn’t always go your way, you have to just suck it up sometimes. You have to just play with some grit and some guts and just keep grinding. We did that tonight and even in the first game. I’m just super proud of these girls.”

Chapmanville came out of the locker rooms on fire to start the game as they jumped out to a 13-2 lead thanks to a pair of treys from senior Ali Williamson.

They extended that lead up to 21-6 after a runner by Brumfield nearing the end of the first quarter, but a three by Mingo Central sharp-shooter Scarlette Thomason trimmed the lead to 21-9 going into the second quarter.

The Lady Tigers continued their hot hand in the second stanza as they started the quarter on a quick 11-1 run and took their largest lead of the game at 32-10 midway through the second quarter after back-to-back 3s from Williamson.

Mingo Central began to claw their way back into the game however as Rhodes and fellow senior Zoe Evans each scored six points in the final minutes of the quarter to trim the lead to 36-27 going into the halftime locker rooms.

The two teams went back-and-forth in the third quarter as Chapmanville led by as much as 13 with 2:13 in the quarter but saw the lead trimmed to seven in the closing seconds, but a three by Williamson before the horn pushed the lead back to ten at 54-44 going into the final eight minutes of play.

The Lady Miners started the 4th quarter with another Rhodes bucket, and then Chapmanville coach Johnny Williamson received a technical foul.

Thomason drilled the two foul shots to trim the Chapmanville lead to 54-48.

The Mingo Central run was extended to 8-0 as a pair of buckets from Wagoner and senior Maliyah Martin brought the Lady Miners to within two at 54-52, which was the closest they had been since the score of the game was 3-0 Chapmanville.

They clawed all the way back with just under four minutes to play as Thomason hit a big three from the top of the key to knot the game up at 59 apiece.

Chapmanville answered however as Williamson converted on a three-point play the old fashioned way to give Chapmanville the lead back at 62-59 with 3:00 to play.

On the next Miner possession, Davis-Smith kept feeding her hot hand as Thomason drilled another three to tie the game up at 62. After a stop on the defensive end, Mingo Central took their first lead of the game at 63-62 after a free throw by Martin with 2:07 to play which set up the decisive two minutes.

“We just kept after it tonight, we had to change our game plan up in the early going. We’re still learning who we are and I’m still learning where to put people and what works best for us as a team,” Davis-Smith said. “Clearly what we started with was not working, but we just really have tried to remain positive with these kids and tell them that they can be successful. But they are going to have to work hard, no one is going to give them anything. But just keep grinding and keep grinding.”

Rhodes 22 points led the Lady Miners in scoring and she also tossed in five rebounds, four assists, and three steals. Thomason follwed her with 18 points including 4 of 10 shooting from beyond the three-point arc.

Evans also reached double-figures for the Lady Miners as she notched 12 points and seven rebounds while Martin just missed a double-double off the bench scoring eight points and 12 rebounds. Martin was out all of the off-season dealing with a knee injury from a season ago.

Williamson led Chapmanville as she scored a game high 24 points including seven three pointers while Brumfield was right behind her with 22 points and four trifectas of her own.

The win for Mingo Central improves them to 2-0 as they return to action on Saturday at Winfield. Tip is scheduled for 3 p.m. in Putnam County.