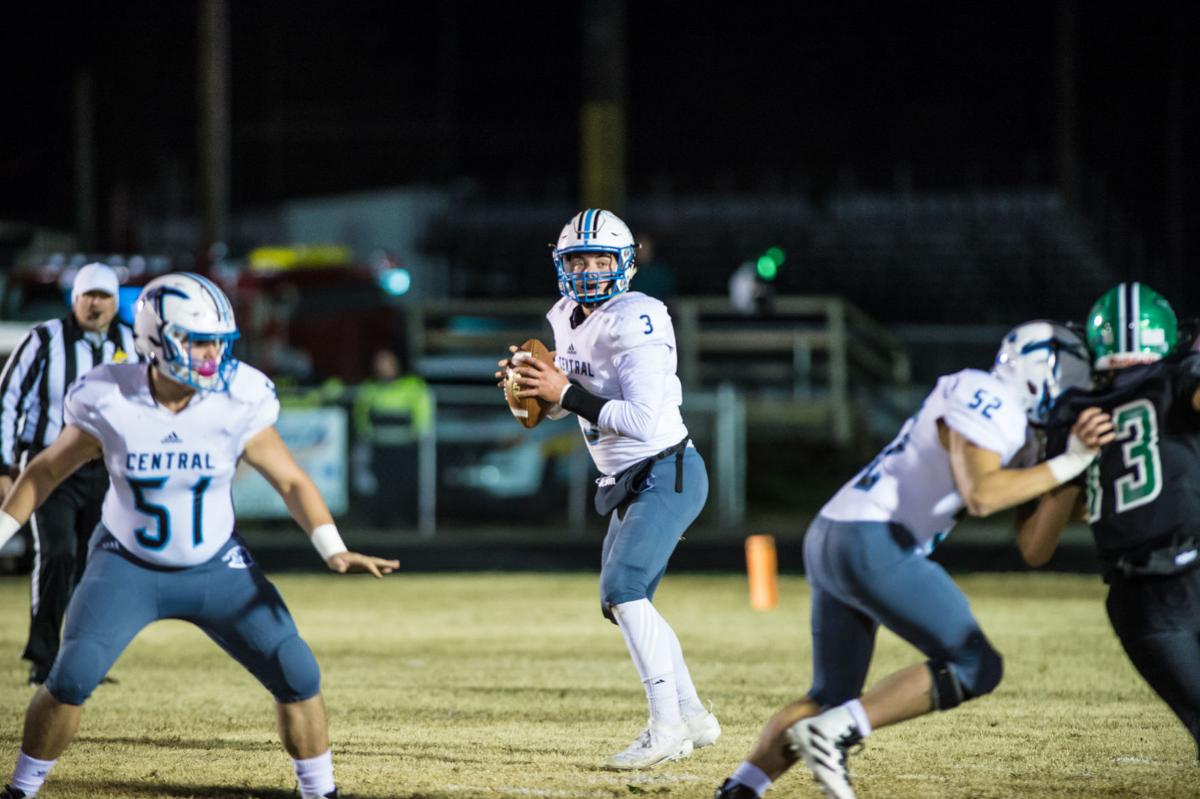 Mingo Central quarterback Daylin “Day Day” Goad drops back to pass during the Miners’ 55-20 win over Winfield in the regular season finale on Friday at Generals Stadium in Winfield, W.Va. 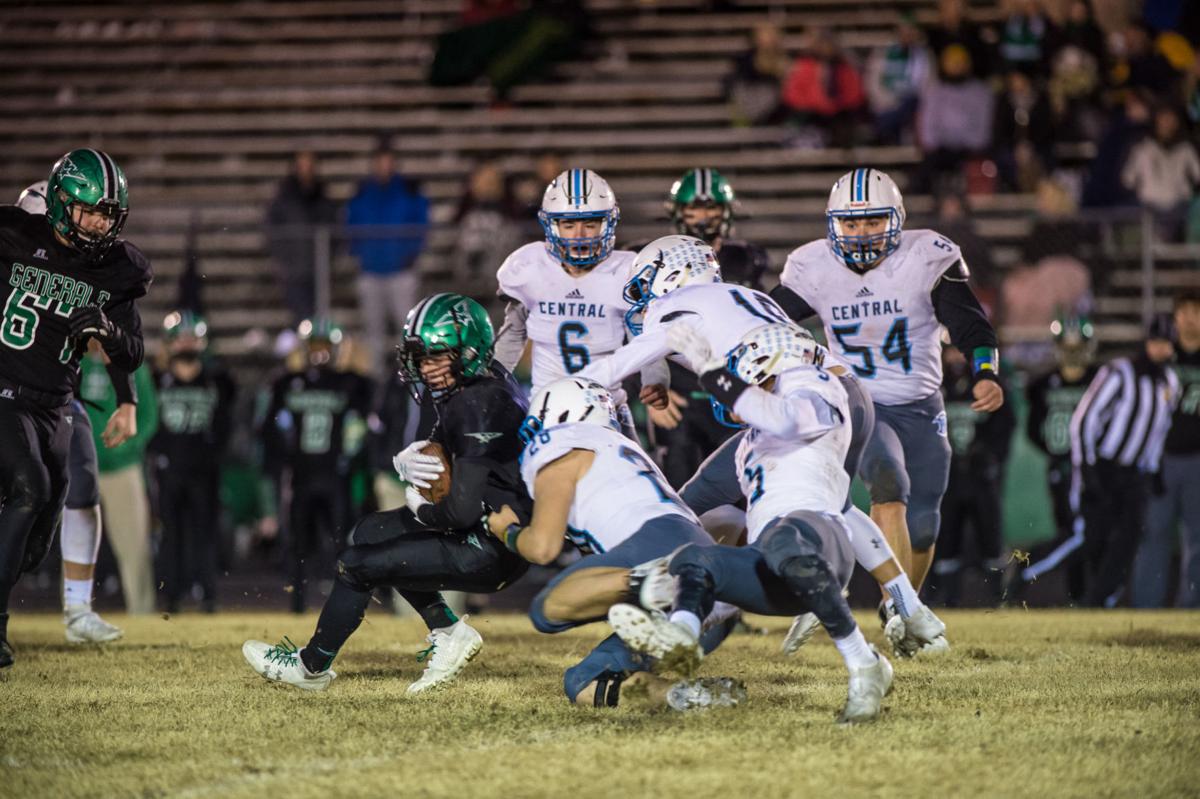 A host of Mingo Central defenders, including Zach Patrick (28), Preston Dingess (6) and Ryan DeBoard (54), converge on a Winfield ball carrier during the Miners’ 55-20 win over the Generals in the regular season finale on Friday at Generals Stadium in Winfield, W.Va.

Mingo Central quarterback Daylin “Day Day” Goad drops back to pass during the Miners’ 55-20 win over Winfield in the regular season finale on Friday at Generals Stadium in Winfield, W.Va.

A host of Mingo Central defenders, including Zach Patrick (28), Preston Dingess (6) and Ryan DeBoard (54), converge on a Winfield ball carrier during the Miners’ 55-20 win over the Generals in the regular season finale on Friday at Generals Stadium in Winfield, W.Va.

WINFIELD — The Mingo Central Miners picked up a very important win in the regular season finale on Friday night as they overcame a slow start and defeated the Winfield Generals 55-20 at Generals Stadium.

The Miners (8-2) needed a win over the Generals (7-3) to keep from dropping in the Class AA playoff standings and avoid a potential first round match up against No. 1 Fairmont Senior or No. 2 Bridgeport. Both teams entered play with identical records and tied at No. 11 in Class AA.

Junior quarterback Daylin “Day Day” Goad made sure that didn’t happen as he had a career day against the Winfield defense to help the Miners overcome a 13-0 deficit at the end of the first quarter.

Hatfield now has 334 catches for 5,093 yards over the course of his four year career which tops the previous records of 329 catches and 5,078 yards. He also has 64 career touchdown receptions, which trails Branden Barrett’s 74 touchdowns he caught for Martinsburg from 2000-03.

His career numbers have him No. 3 all-time nationally in catches, eighth in receiving yards, and seventh in touchdowns according to the NFHS.org record book.

Hatfield broke the state record for most receptions and yards in a 10-game regular season a week ago in the Miners win at Chapmanville. For the season, the Moss Award favorite has 115 catches for 1,795 yards, and 20 touchdown receptions.

Hatfield still has a chance to break some more records as he needs he only 17 receptions, 261 yards, and seven more touchdowns to break the single season records including the playoffs.

Junior Isa Scales also had a career day against the Generals, as the wide receiver led the Miners in receiving yards with 224 and touchdowns as he hauled in three scores.

All of Scales’ touchdowns came in the second quarter as the first two went for 21 and 10 yards while the second score knotted the game up at 13 apiece.

His third score came on a 77-yard flea flicker with 1:33 to go in the first half that gave the Miners the 20-13 lead going into the halftime locker rooms.

Coach Josh Sammons club came out of the halftime locker room and continued the offensive onslaught as senior running back Tanner Cisco broke free up the middle from 45-yards away.

Goad’s PAT was good and the Miners took the 27-13 lead with 10:03 left in the third quarter. Cisco led the Miners in rushing on the night as he ran seven times for 61 yards and a score and caught two passes for 47 yards giving him 108 total yards from scrimmage.

Following a stop by the Mingo Central defense, Goad went back to work as he found sophomore wide out Devin Hatfield for a 12-yard score an a nice slant pattern, as Goad’s PAT gave Mingo Central the three score lead at 34-13.

The youngest Hatfield finished the game with three catches for 114 yards and two scores, while also picking off a pass on the defensive side of the ball.

After a rushing touchdown by Winfield’s John Covert trimmed the Miner lead to 34-20, Goad responded again as he connected on a scoring strike to Drew Hatfield from 46-yards away as the lead was extended to 41-20 with 1:32 to go in the third.

On the ensuing Winfield drive, the Miner defense made a stand on 4th and goal as they stopped the Generals at the two yard line to take the ball over on downs.

Goad took to the air on the first play as he hit Drew Hatfield again on a fly-pattern and the states leading receiver hauled it in over two defenders and raced 98-yards to the end zone for the back breaking touchdown. Goad’s PAT was no good, but the Miners took the 47-20 lead with 9:51 to play.

On the next Miner possession they were backed up near the goal line once again when Goad aired it out, this time to Devin Hatfield, as he hauled it in in stride and took it 95-yards to the house for the touchdown. Goad hit Drew Hatfield for the two-point try as the Miners took the 55-20 lead with 5:09 to play.

Mingo Central put up their best offensive performance of the season as they amassed 700 yards of total offense while holding Winfield to 347 yards. After the Miners fell behind 13-0 in the opening quarter, they outscored the Generals 55-7 the rest of the way.

Goad led the Miners on the defensive side of the ball as he picked up six tackled while seniors Preston Dingess and Ryan DeBoard each recorded five tackles.

Dingess also had a sack for the Mingo Central defense. and led with 1.5 tackles for loss.

The win for Mingo Central sees them complete the regular season with an 8-2 mark and 8-1 in Cardinal Conference play, which was second in the conference behind only 9-0 Poca. The Miners now have won eight games in the regular season for each of the past six years.

The win helped Mingo Central finish at No. 10 in the final Class AA playoff ratings which will set up a first round match up against No. 7 seed Shady Spring (9-1). Winfield finished 7-3 and finished No. 16 as they will head to No. 1 Fairmont Senior.

This will be the first ever meeting between the Miners and the Tigers with the victor set to play the winner of No. 2 Bridgeport and No. 15 Lewis County in the quarterfinals.

It initially looked like the game could be played at Woodrow Wilson High School as Thomas Field, the Tiger’s home field, was not initially approved to host a game according to the WVSSAC Playoff Manual.

But portable bleachers will be brought in to meet the seating requirements.