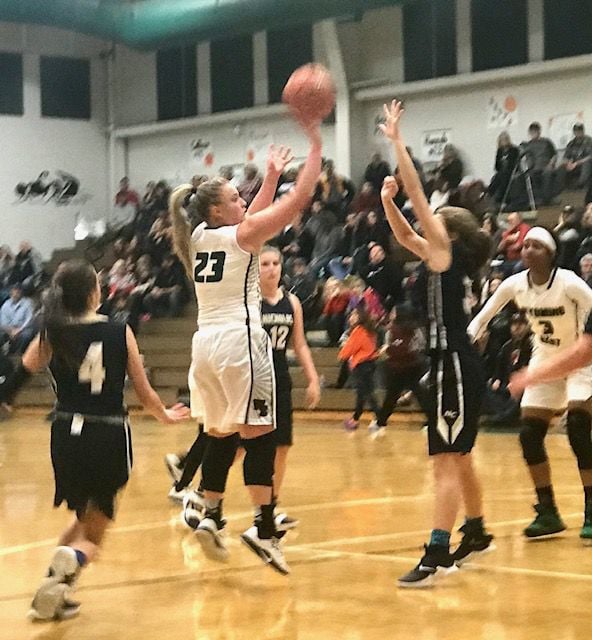 Wyoming East’s Hannah shoots a short jumper, which would count for her 11th straight point on a 30-0 run in the Warriors season opener on Friday. Wyoming East won 71-27. 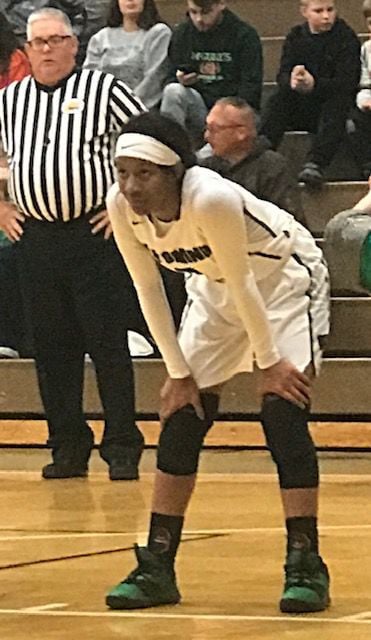 Wyoming East’s Daisha Summers had 17 points and eight rebounds in her first start on Friday. The Warriors beat Nicholas County 71-27.

Wyoming East’s Hannah shoots a short jumper, which would count for her 11th straight point on a 30-0 run in the Warriors season opener on Friday. Wyoming East won 71-27.

Wyoming East’s Daisha Summers had 17 points and eight rebounds in her first start on Friday. The Warriors beat Nicholas County 71-27.

NEW RICHMOND — For a team that lost four starters and was supposed to be rebuilding, there was a hint of familiarity to Wyoming East girls season-opener against Nicholas County.

There was a Blankenship knocking down 3s on a huge run. There was a pesky defense causing turnovers and holding the opponent to single-digit quarters.

It all added up to a 71-27 Warriors victory over the Grizzlies Friday night.

Sophomore Daisha Summers, in her first start, had 17 points and eight rebounds to lead the way. Freshman Abby Russell had 14 points and that Blankenship, junior shooter Hannah Blankenship, added 13, including 11 straight on a key third quarter run.

It started out slow, as the Lady Warriors were bogged down by 16 first-half fouls, leading directly to 13 Nicholas County points. Yet the Warriors still led at the half, 23-18.

The fouls also led to coach Angie Boninsegna having to go to her young bench early and often.

“We were in deep foul trouble,” Boninsegna said. “We just need to relax and play. Our girls haven’t played a lot together.”

The team responded in the third quarter with an explosion that led to the team scoring more than it did in the first half.

After the two squads traded free throws giving the Warriors a 24-19 lead, the Warriors ripped off 30 straight points.

It was eerily similar to runs of previous years.

The Warriors had strong showing on the run from Daisha Summers and Hannah Blankenship. Both were role players off the bench last season. Summers had seven-straight to help jump start the run. Blankenship, who watched her cousin Jazz, now at Concord, set the 3-point standard at Wyoming East, showed she can shoot, too. She nailed three-straight 3s and had 11 straight as the Warriors put the game out of reach.

Sarah Saunders also had two baskets to start the run and Abby Russell hit her first two career 3s and a pair of free throws during the uprising.

When the smoke of that extended seven-minute run cleared, the Warriors had a 54-19 lead.

As with the teams of the recent past, it started on the defensive end.

“I think our defensive intensity picked up,” Boninsegna said. “We changed our defensive scheme a little bit. Skylar Davison, the team’s lone returning starter, and Abby Russell came in and played really good on the press for us, got some key steals and got the ball out on the break.”

Russell, a freshman, had those 14 points in her Lady Warriors debut and all told, freshmen, including Colleen Lookabill, Kayley Bane and Laken Toler, all of whom played before halftime, accounted for 21 points.

“I think all of our freshmen (there are six on the roster) came out and played well,” Boninsegna said. “At one time we had four freshmen out on the court when we were on foul trouble. I think they will get better the more relaxed they get. They just need to go in and be relaxed and play hard.

Davidson was proud of how the new starters around her played.

Summers really stood out in her first start for the Warriors.

“Daisha really worked hard in the off season,” Boninsegna said. “She’s improved a lot. She is really a mismatch because she will play a guard and sometimes she will go all the way up to five (post). I thought she did really well off the dribble today. She had some nice drives, played hard on the boards and really had a good game.”

Summers was happy with her debut.

“I think I played really good,” Summers said. “I was confident. I went in and did what I was told and I just played like I was supposed to (play).”

“I thought we played well in the first half,” Nicholas County coach Tom McGirl said. “In the second half they took us out behind the woodshed. They made shots. They got rebounds. They got in our face on defense. They caused turnovers. They wanted it more than we did.”

Wyoming East gave up just nine points in the second half, nine in what ended up being a decisive third quarter. The Grizzlies hit just five field goals in the game.

Taylor Brown led the Grizzlies with seven points and Maggie Gadomski had six.

Wyoming East will now be traveling through the holidays, with seven-straight games before returning home on Jan. 6 against Independence.

We're always interested in hearing about news in our community. Let us know what's going on!