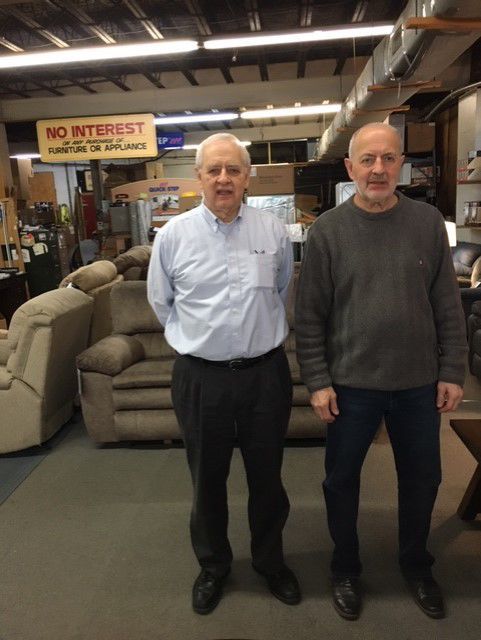 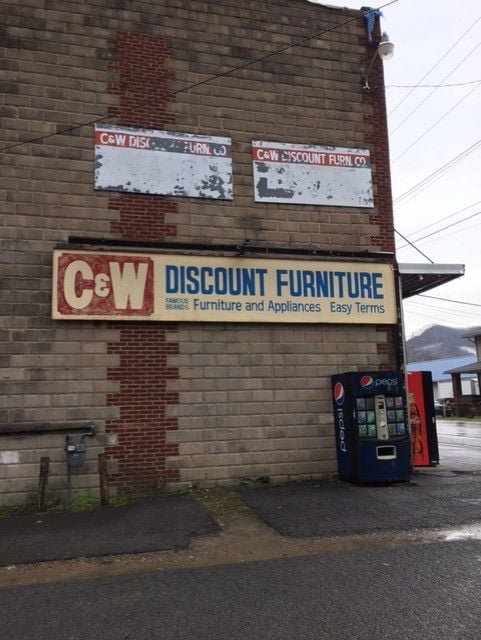 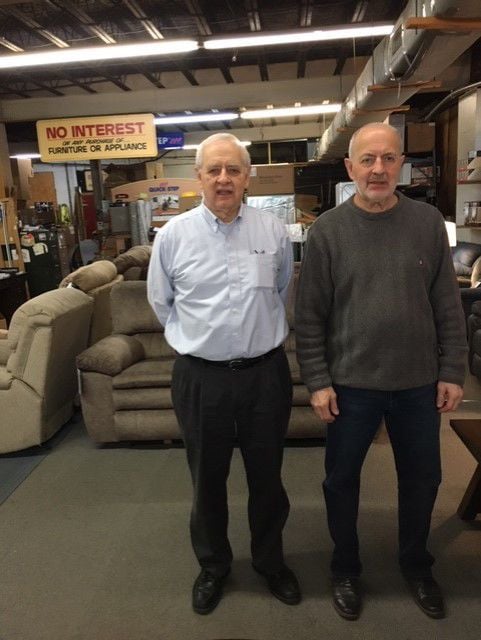 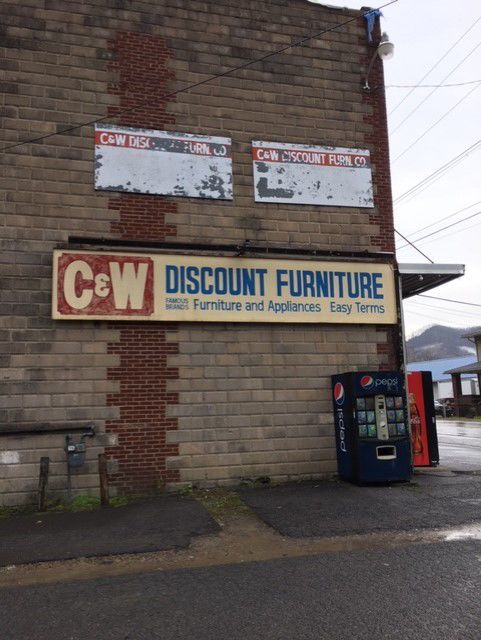 That phrase seems to apply well to one of Logan County’s most established businesses, C&W Discount at Stollings. Despite all of the changes that have occurred — particularly in Logan — over the last several decades, the locally owned store continues a time honored tradition of providing discounted furniture, appliances and much more.

Like every building in and around Logan County, there is always some sort of interesting history behind what either was or still is a successful business interest of one sort or another, and C&W Discount certainly is no exception to that unwritten rule.

Looking back into Logan’s business history, names like Savas, Klele, Kohn, Ghiz, Weiner, Chryssoffos, Allie, Ollie, Glavaris and many others weren’t exactly last names listed among the early Logan County founding fathers — names such as Dingess, Farley, Hensley, Chambers, Hatfield and others, who etched out a living in the Guyandotte valley long before the turn of the 20th century and before coal was “king” in our southern coal fields.

The name Calandros cannot be found on the Declaration of Independence, but like other people who came to this country seeking the freedom to work, worship and prosper in an open society, George Calandros, of Greek descent, found his way to Logan in 1934. And, after visiting with relatives, who were working for Nick Savas at what was the “New Eagle Restaurant,” which was located across Stratton Street from Lilly’s Crown Jewelers, he chose to stay and go to work for Savas.

In a 1999 interview with Martha Jane Becker, a former WVOW radio personality and well respected community advocate, Calandros said he came to Logan to visit relatives and “I liked it; I still do, and so, I’m still here.”

Taking what he learned from Savas’ restaurant, he later managed the Sportsman’s Grill, which was located where Dan and Dave’s Sporting Goods now stands on Main Street.

Rapidly advancing as a businessman, he was approached by Ezra Browning, owner of the Browning Hotel on Stratton Street that once stood behind McCormick’s Dept. Store, and Calandros became an associate in opening the “Rainbow Grill” in 1938 beside of the Logan Theatre on Main Street. That restaurant reportedly was one of the first “family” oriented restaurants in Logan and had a private room for parties, civic club meetings and governmental gatherings. It closed five years later in the midst of World War II.

Calandros wasted little time with his business interests, becoming partners with Maurice Stokley in opening a chain of grocery stores known as the West Virginia Supermarkets. Some readers may recall the store locations at Deskins Addition, Man, Logan and West Logan, the latter of which still stands as Staton’s Inc., an appliance store owned by Logan County Assessor Glen Adkins and his wife, Brenda.

It was during this time period that Calandros and his wife, Mary Katherine (Smith), produced three sons, all of whom were destined to play Logan High School basketball: Johnny, who has business interests in Florida, and Jack and Jerry, both of whom operate the C&W family business.

Johnny, the eldest of the three, played basketball for former Logan coach Jim Lilly, while Jack and Jerry were members of teams coached by Willie Akers — Jack on the 1963-64 championship squad and Jerry as a player on the 1972 team.

In 1963 the boys’ father became partners with Bob Whited in opening C&W Discount and the business maintains the “W” in its name still today, although Calandros became sole owner in the early ’70s.

Both Jack and Jerry joined their father in the business at different times following college stints, Jack in 1967 and Jerry in the early ’70’s. The company has always employed from eight to 10 people and may be the most consistent advertiser in Logan County in supporting local athletics on both radio and in the newspaper, a tradition first started by their father.

The family business is likely to continue for many more years as Jack’s son (Joey) works at the store, as does Jerry’s stepson, Ryan Starr. Other family members include Jerry’s wife Diane, employed by Legal Aid of West Virginia; a stepdaughter, Ashley Kelly, employed at Chapmanville Primary Care; a son (Jordan) in the U.S. Air Force; and Josh a railroad employee in Indiana. In addition to Joey, Jack’s other son, named after his father, is a civil engineer in Orlando, Florida.

Calandros Real Estate, brokered by Jack’s wife (Sharon) for 15 years, and a pre-owned car lot co-owned by the Calandros brothers and Mike Watson, also were former businesses at the Stollings location. But when it comes down to it, the store is still all about furniture, appliances and electronics of every sort — some 56 years after the 1963 flood changed Logan County.

So great was the flood that it put many mom and pops stores throughout the county out of business and it caused George Calandros, who also was a co-owner/operator of the Smokehouse Restaurant in downtown Logan at one point, to establish the current C&W store. Nearly every community had three or four small stores prior to the flood.

It turns out that before C&W was formed, Calandros was doing business at the Stollings location as Logan Wholesale and Grocery. However, when the flood devastated the county in ’63, the stores that purchased their supplies from Logan Wholesale could not afford to pay their debts, forcing the versatile businessman to go into a different type of business.

According to Jack Calandros, flood water got into the business approximately two feet deep in ’63, toppling over all of the shelves and ruining the stock. That has been the only time the Route 10 business has been flooded.

When the new road from Man to Logan opened a few years ago, there were those people who feared that businesses in the Stollings/McConnell area might suffer. However, as it turns out, that has not been the case, despite the local Chevron station in Stollings closing for an unrelated reason.

Pizza Hut, for instance, has announced that it plans a total renovation for its Stollings location, dispelling rumors that it might move to Fountain Place Mall.

“We haven’t noticed any real difference at our store,” Calandros explained. “With people able to get here in about 10 minutes from Man, it actually has been more convenient for those customers.”

The friendly environment, low cost terms and the “small town-big store” atmosphere has lasted from one century to the next at C&W Discount, thanks to their visionary father and two sons named Jack and Jerry.

And, of course, their loyal customers.

There have been many fine basketball players grace the halls of Logan High School. From Walt Wolowac to James Davidson, there could be many arguments as to who was the best ever player to wear a Wildcats uniform.

Admittedly, I barely remember Davidson at LHS, as I only saw a few games there as a youngster. I do recall watching him on television display his skills later at Marshall University as a player. And I certainly never saw Wolowac perform, since I wasn’t even born then, but I watched nearly every game Mark Hatcher played at Logan High School.

Hatcher’s sudden death was a shock to many of us who had the pleasure of knowing him as a player, coach, teacher and physical education instructor. His demeanor as a professional was the same as the Mark Hatcher who quietly stroked a golf ball at the Logan Country Club. He was always — to borrow a phrase — “calm, cool and collected.”

I graduated with Mark in 1971, but really didn’t get to know him until several years later. To me, he was a star — a true shooting star — and not just in the basketball sense.

Long before the three-point shot was ever implemented, Mark was bombing from long range. I once watched him sink 20 straight 30-footers in a practice session. It is just my opinion, because I know there can be arguments for former LHS stars like Vic Herbert, Ross Scaggs, and others, but Hatcher was the best outside shooting player ever in Logan basketball history. Some may even argue he was the best player ever at LHS, although Davidson’s overall achievements are difficult to set aside.

Mark chose Virginia Tech on a full scholarship back when that school was well recognized for its basketball prowess. What many people may not know is that there were other big time schools after Hatcher, one being UCLA when a coach named John Wooden created a basketball dynasty there.

Mark blew out a knee as a freshman at Virginia Tech and never could overcome the results of that injury.

I extend my sincere condolences to the Hatcher family as the rock group Bad Company’s song “Shooting Star” reverberates through my head, and I find peace in its lyrics.

QUOTE OF THE WEEK: “Yet a little sleep, a little slumber, a little folding of the hands to sleep.” — Proverbs 6:10

DID YOU KNOW that ancient Chinese used to scatter firecrackers throughout their homes because they served the purpose of being fire alarms?

CLOSING NOTE: We are just a few weeks away from the filing date for the 2020 May Primary Election, which may prove to be a doozy. Here is the breakdown of Logan County voters graciously provided by the Logan County Clerk’s office: 15,562 Democrats; 4,130 Republicans; 3,242 Non-Partisans; 2,354 Independents; 52 Libertarians, and 21 Mountain State registrations. That is a total registration of 25,400 residents. In case you’re counting, if you add the Republican registrations with the Independents and Non-Partisan, that still leaves the Democrats with a 5,836 vote majority. It is good to know that magistrates are non-partisan candidates.