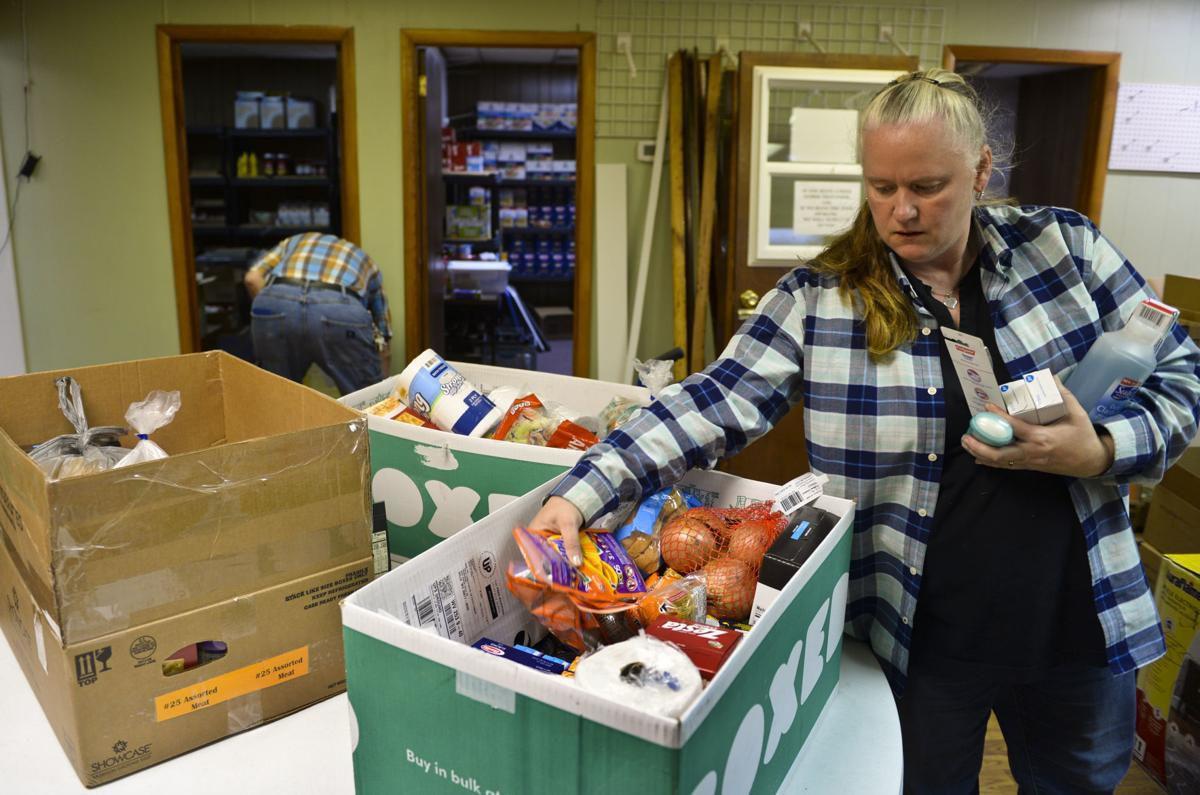 Volunteer Joann Keen loads boxes of food for the Dille Church of the Nazarene food pantry in Clay County, W.Va. 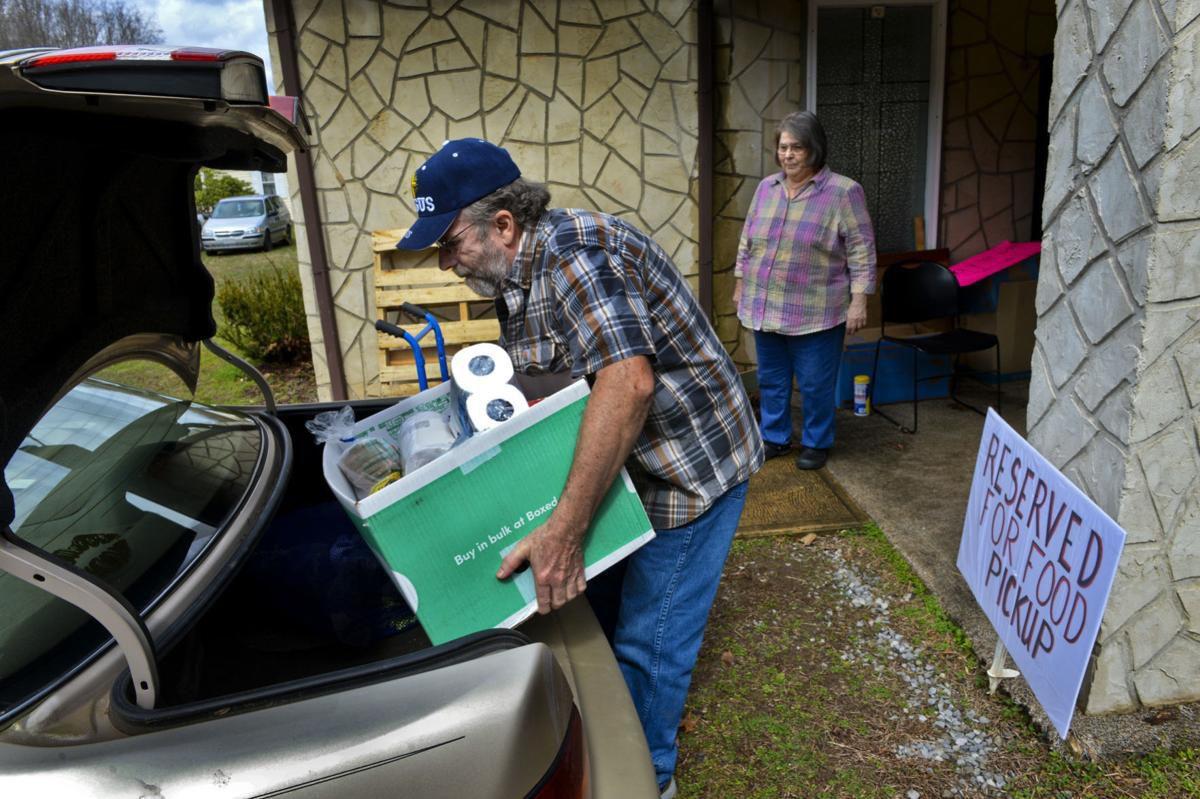 Tim Butler loads food from the Dille Church of the Nazarene food pantry into a car under the watchful eye of Pastor Patricia Fischer in Clay County, W.Va. 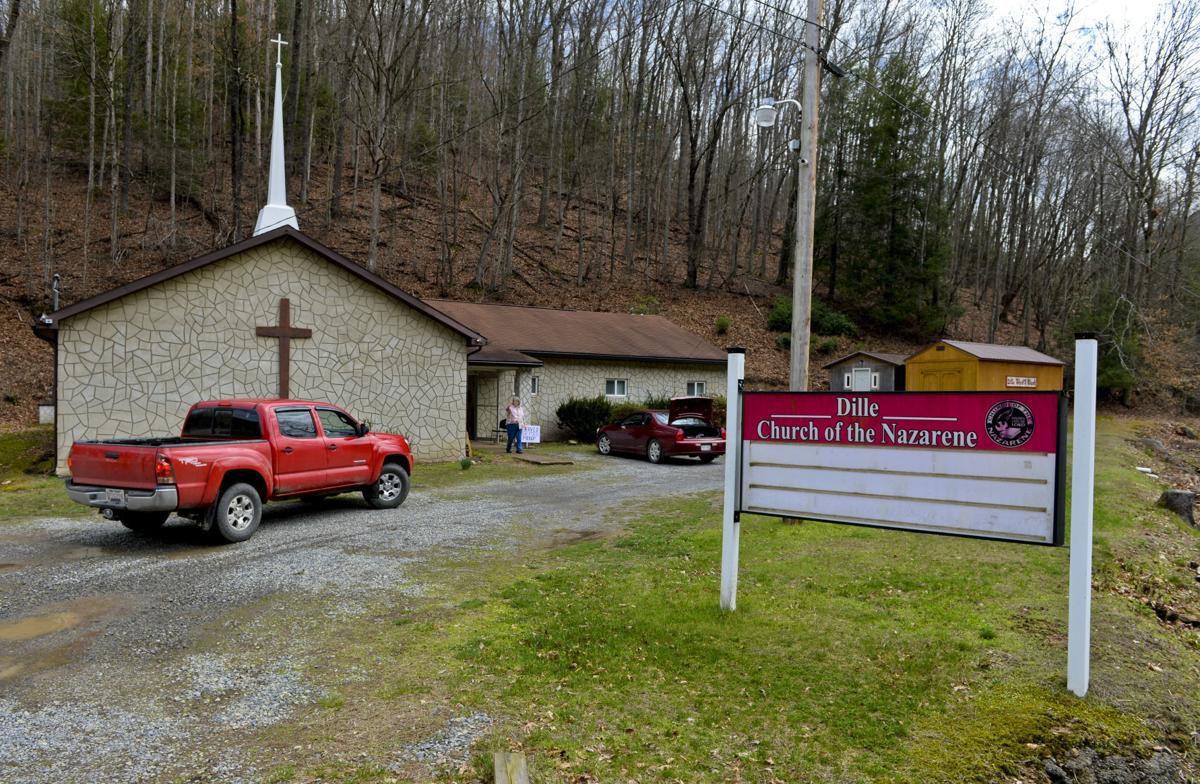 Cars line up to receive food from the Dille Church of the Nazarene food pantry in Clay County, W.Va.

Volunteer Joann Keen loads boxes of food for the Dille Church of the Nazarene food pantry in Clay County, W.Va.

Tim Butler loads food from the Dille Church of the Nazarene food pantry into a car under the watchful eye of Pastor Patricia Fischer in Clay County, W.Va.

Cars line up to receive food from the Dille Church of the Nazarene food pantry in Clay County, W.Va.

On an average day, almost 300,000 West Virginians are food insecure. Now, though, as more lose their jobs and income from coronavirus-related business closures, that number is growing and is expected to increase quickly.

Cyndi Kirkhart, director of Facing Hunger Food Bank, a Huntington-based nonprofit that serves more than 100,000 people annually across 12 counties, said her organization is already feeling the weight of the situation.

“To tell you the truth, I started ordering food up 31/2 weeks ago, figuring that this was coming. Historically the number of people we’ve served — when we’re not in this pandemic — have been stable. We know what to plan for,” Kirkhart said. “This ... the exponential growth we’re seeing already, it even goes beyond the shutdown. We’re not sure how much we’re going to need, we just know it’s going to be more.”

In the last three weeks, Kirkhart estimates she’s spent over $150,000 on food to distribute to community pantries. That’s much more than average, she said.

Normally, the food bank relies heavily on donations from large, chain grocery stores, like Kroger and Walmart. Today, though, those stores are also struggling to meet the demand of shoppers stocking up on food and panic buying in the midst of the pandemic. That leaves little food available for donation, Kirkhart said.

“That’s a big loss for us,” Kirkhart said. “What we can’t get donated, we have to buy. And now, with what’s going on, we’re going to have to buy more of it. Probably for a while.”

Local pantries, which rely on Facing Hunger and other food banks in the state, like Mountaineer Food Bank, to fill their shelves are also seeing demand grow as products become harder to access.

June Jude, who heads House of Hope food pantry in Mingo County, said she’s been fielding calls from those in need for over a week now asking if the organization would be giving food this month.

This is normally the time of year they do intake for new people at the pantry, Jude said, and this month there are going to be a lot of new people.

“No question about it, with shop closures and food out at the stores, we’re going to continue giving because a lot more people — a lot — are going to need it,” Jude said.

House of Hope normally gets its food from Facing Hunger, and rely on donations to buy what they can’t get there from the local Food City grocery store.

“Usually our cornflakes, spaghetti, tuna, pinto beans, that kind of stuff ... We’re hoping [Food City] can continue to serve us, but there isn’t much food left,” Jude said. “We called in our order for this month, they said they’d try to get it in, but they’re already having a hard time getting their shelves filled.”

As the need grows, Kirkhart said Facing Hunger is discussing increasing the number of county distributions it does per month.

Increased distributions, though, could mean a call for more volunteers. That’s an issue all its own in the wake of a pandemic, Kirkhart said.

Statewide, a majority of volunteers at food banks and food pantries tend to be older. Kirkhart said when she joined Facing Hunger in 2014, the average age of their volunteers was 67 years old. Today, it’s 72.

Per the Centers for Disease Control and Prevention, individuals with pre-existing respiratory illnesses or weak immune systems, and adults older than 60, are considered high risk for contracting COVID-19 and suffering its worst symptoms. In other words, the people needed to keep food pantries and food banks running during this pandemic are some of the most vulnerable.

Some pantries have understandably closed because of a lack of able volunteers, Kirkhart said.

At Dille Church of the Nazarene’s food pantry, in Clay County, Pastor Patricia Fischer works with five volunteers to distribute food each Friday. Two of those volunteers suffer from asthma, one has diabetes and most are over 65 years old.

“We’re trying to be cautious, we’re making it as safe as we can for us and for them,” Fischer said. “We need to be there, though. We’re all we have. These people need food when there’s not a virus. This is what we’re here to do, now more than ever.”

Jude, in Williamson, is experiencing something similar. She’s disabled and doesn’t physically work the distributions, but several of her volunteers are also older. They aren’t stopping, either.

In addition to older volunteers, a number of seniors in the state are food insecure and rely on food pantries to eat, according to Feeding America, a national advocacy group focused on food insecurity.

Kirkhart said Facing Hunger is ensuring all its community partners are employing best practices, based on CDC guidelines, to limit risks to both volunteers and those relying on him.

They are encouraging no physical contact and asking pantries to hold distributions outside if possible.

In Dille, Fischer is organizing drive-thru pickups. Visitors are urged to stay in their cars to limit contact.

In Williamson, Jude said all her volunteers are wearing gloves and masks, and also operating as a drive-thru. Volunteers are filling out the paperwork for new visitors, and older individuals are being urged to show up early, before the rest of the crowd.

“The less they touch the better it is for all of us. It’s not easy, though. When they come here, they love to get into fellowship with one another, talking a bunch,” Jude said. “It’s kind of sad but not now, we’re asking them to pay attention, get this done quick because we’ve got a lot more to do.”

Kirkhart said it’s important to remember that more changes could be made at any time as the situation progresses, and there’s no way to know what next week will bring.

If people are ordered to remain in their homes, Kirkhart said, she’s confident the West Virginia National Guard, or other agencies, will step up to feed those in need.

For now, Kirkhart said, part of the worry is how long food will last, and what food will be available in the future if people continue to buy the way they have been.

“I’m asking, if someone out there went a little far and bought more than they need, consider donating some to a pantry. They need it, your neighbors need it,” Kirkhart said.

While the pandemic is unprecedented, Kirkland said it has given rise to familiar conversations — how to feed children outside of the school system, what to do if people can’t leave their home, etc.

Kirkhart said she hopes those discussions continue once things return to normal.

“We’re going to be seeing a lot of people maybe we haven’t seen before, but that we’re prepared to help. It comes at a price, which we’re glad to bear, and we know that when these things happen the issue of hunger rises to the forefront,” Kirkhart said. “We hope we can keep it in the forefront. During these times we can lay the groundwork … to strengthen these hunger relief systems so they’re easier to navigate every day, not just in crisis.”