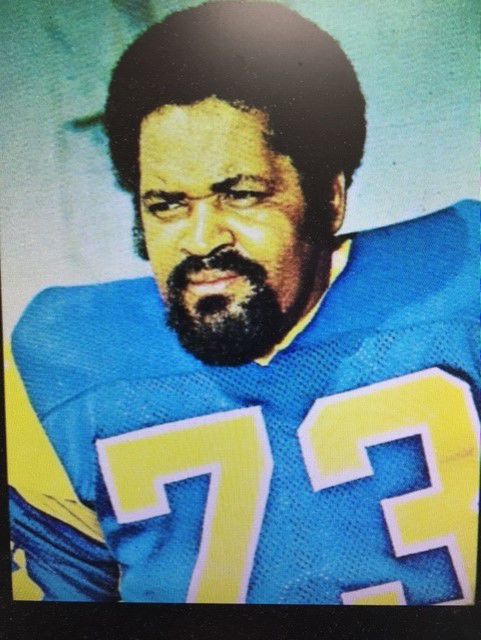 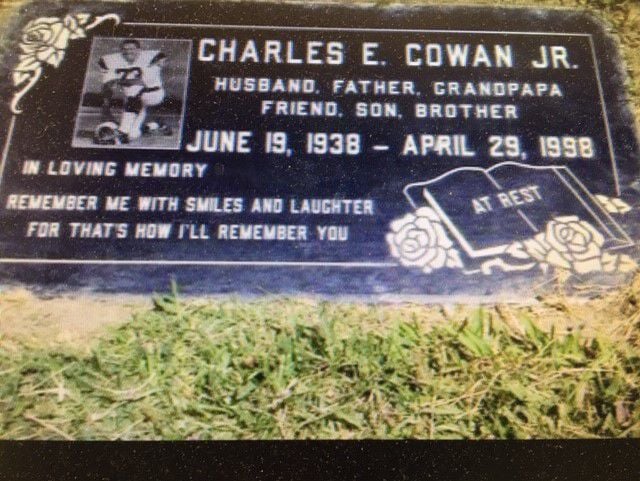 There is a small green sign at Amherstdale on Buffalo Creek in Logan County that simply reads “Cowan Avenue.” It is a solemn reminder for those few people who actually know that the sign represents the father of one of the Los Angeles Rams’ all-time great football players — Charlie Cowan, whose dad with the same name proudly operated a gasoline station at Amherstdale.

Just like pro football great Lionel Taylor, Charlie Cowan also hailed from Buffalo Creek near Man, where he graduated from Buffalo High School before schools were integrated. Cowan, who received a diploma from Buffalo High three years after Taylor, would be drafted by the Rams in 1961 and would go on to start 15 seasons as an offensive lineman, helping the Los Angeles Rams to the NFL playoffs five times (1967, 1969, 1973, 1974, 1975).

Although big number 73 is gone, the guy chiefly responsible for Cowan being allowed to display his talents was Lionel Taylor. “I came home from school (New Mexico Highlands) for Christmas and when I saw Charlie, he said he had quit school (West Virginia State). So, I called my coach and said we got a ‘real ‘player’ here,” Taylor explained. “Coach called Charlie’s parents and promised he would take good care of him, so he came to New Mexico Highlands. The rest is history.”

Taylor, who himself starred with the Denver Broncos and later received two Super Bowl rings as the receivers coach while with the “Steel Curtain” Steelers, described Cowan as “great.”

“Charlie and I only played one year together in college, but he also was an All-American basketball player and the best athlete ever at New Mexico Highlands,” declared Taylor.

Taylor’s ascent to the New Mexico school also is of interest in that he was spotted by Lou Gibson, a brother to the New Mexico school’s head coach (Don Gibson) during what Taylor called a “black All-Star game” in Charleston. The brother gave Taylor his telephone number and told him that if he wanted to play college ball in New Mexico, to call the number.

“I wadded the paper up and threw it away and went to West Virginia State,” Taylor remembers.

Later, unhappy at WV State, Taylor managed to get back in touch with Gibson, who still was interested in the speedster. “I got on a bus and for $36 rode it for three days to get to the school,” said the 84-year-old, who now lives near Albuquerque, New Mexico. “When I found out the coach liked to run the single wing offense, I about had a heart attack,” Taylor said, explaining it as being mostly a run oriented offense and that he was a pass receiver. “Since I only had $13 on me, I had to stay.”

During his many years as both a player and coach, Taylor got to know many professional football players, including NFL greats like Jim Brown, Terry Bradshaw, Jack Lambert, Johnny Unitas and many other players and coaches. However, when asked who he thought was the best all-around player he ever saw, Taylor wasted no time in replying, “Cookie Gilchrist,” a former player most people have never heard of.

“He was a 250-pound running back, who could play defense and even kick the football,” said Taylor, pointing out that Gilchrist was drafted by the Cleveland Browns, but played with the Buffalo Bills and Denver Broncos. His career in American football followed six unbelievable seasons in the Canadian Football League, where he played linebacker, kicked field goals and conversions and returned kicks. In his CFL career, Gilchrist recorded 4,911 rushing yards, 1,068 receiving yards, 12 interceptions, plus 14 field goals.

Starting in 1962 with the Buffalo Bills in the AFL, he made the league’s all-star teams four consecutive years; three with Buffalo and one with Denver, before going to the Miami Dolphins for one season in 1966.

In an oddity that is in character with today’s trying times, Gilchrest is the only player ever to turn down an induction to the CFL Hall of Fame, citing his treatment and racism during his years in Canada. Also, he refused to attend his being named to the “Wall of Fame” at Buffalo because he wanted paid to be present. He died in 2011 and was honored posthumously by the Bills in 2017.

In a newspaper interview some years before his death, Gilchrest told a reporter that most of the problems he encountered as a player were the result of him standing up for principles at a time when black athletes were expected to remain silent.

Considering that Taylor played with many NFL greats such Jim Brown, who many people say was the greatest running back ever, Gilchrest must have been a tremendous talent. However, Taylor described Brown as also being “great.”

Taylor recalled the story of the first time WVU graduate and New York Giants great Sam Huff played against Brown. “Huff looked at Brown and said, ‘You stink’.” “On the next play, Brown took the ball 60 yards for a touchdown and turned around to say, ‘How do I smell from here’?”

When asked who he thought was the best NFL quarterback he had ever seen, Taylor said, “I have no idea”, but mentioned Terry Bradshaw, Otto Graham and Johnny Unitas, all three members of the Hall of fame.

“Bradshaw was a heck of a player, said Taylor. “We really didn’t throw the ball at Pittsburgh. We were mostly a running team, but he could fire the football when he wanted to.”

Taylor recalls many of the guys he played for or against, but never has forgotten getting “clothes lined” by former Green Bay linebacker Ray Nitschke. “I was lying on the ground and coach said he was taking me out of the game before I got killed. “I looked up and said, ‘It’s too damned late.’”

Taylor described former Browns owner Art Modell as being “a good owner” and he said the Rooney family was “fantastic” with Pittsburgh, but he noted that “I owe everything to George Halas,” the former owner and coach of the Chicago Bears. “He gave me a chance to play when there was just 33 players to a team. So, there’s always a place in my heart for Chicago.

As the receivers coach for Pittsburgh in 1972 when the Buffalo Creek flood disaster occurred, the Steelers franchise chartered a plane for him to Charleston when he could not find out if his parents were victims of the flood.

“I tried to call, but couldn’t get through. When I got to Man, I rode in a big army truck to Lorado and saw that their house and car was gone. I ended up finding them, but when I went to Man High School where everybody was at, it was a sight,” said Taylor. “There was no race problem there. Everybody was taking care of everybody.”

After 40 years of working in the coal mines, Taylor’s parents (J.C. and Bertha Glenn) moved to Michigan after the flood and Lionel Taylor has never returned to Man, but he maintains a tight connection to his former hometown through his good friend and longtime Man High School teacher and coach, William “Tootie” Carter, who he stays in touch with via telephone.

Like Taylor and Cowan, Carter also played football at New Mexico Highlands, but was a graduate of Man High School after schools were integrated. “Back in my days,” says Taylor, “the pros weren’t taking small backs that could run and catch like today. If Tootie had played back then, he would have been on a pro team. I’m a big fan of Tootie’s.”

To name just a few players Taylor taught when he coached quarterbacks and receivers at special summer camps — which don’t include the many guys he played with and coached elsewhere — there was Adrian Peterson, Chad Pennington, Eli Manning, Byron Leftwich and many others before Taylor retired in 1992.

One could write a book about the life of Lionel Taylor, but there are two things few, if anyone, beside Tootie Carter, knows about him, both of which are simply amazing.

Many football fans can recall the 1979 Coca-Cola commercial in which “Mean Joe Greene” tosses a jersey to a kid after the boy gives the Steelers star his bottle of Coke. Well, the truth is there would never have been that commercial had it not been for assistant coach Taylor, who talked the star out of leaving the team following his team announcement that he was leaving the Steelers. Taylor caught him in the team parking lot as Greene was departing and convinced him to stay with the team.

Something else hardly anyone knows, but for those football scholars out there who surely can recall the 1972 game that came during the same year as the Buffalo Creek flood, it should be pertinent information that the man responsible for what has been termed “the immaculate reception’” and “the greatest NFL play of all time” was Lionel Taylor. The play came in the AFC divisional playoffs against Oakland.

The play was a turning point for the Steelers, who reversed four decades of futility with their first playoff win ever. “I called the play,” Taylor explained. “It was supposed to be a simple hook to Barry Pearson for a quick first down, but Bradshaw had to scramble and didn’t get enough on the ball.”

Regardless, Franco Harris wound up catching the ball in the waning seconds to set up the Pittsburgh win.

So, here we are in the bizarre year of 2020, and two people who Logan County — especially the Triadelphia area — should be bragging about are hardly even known locally for their heritage and their greatness in professional football.