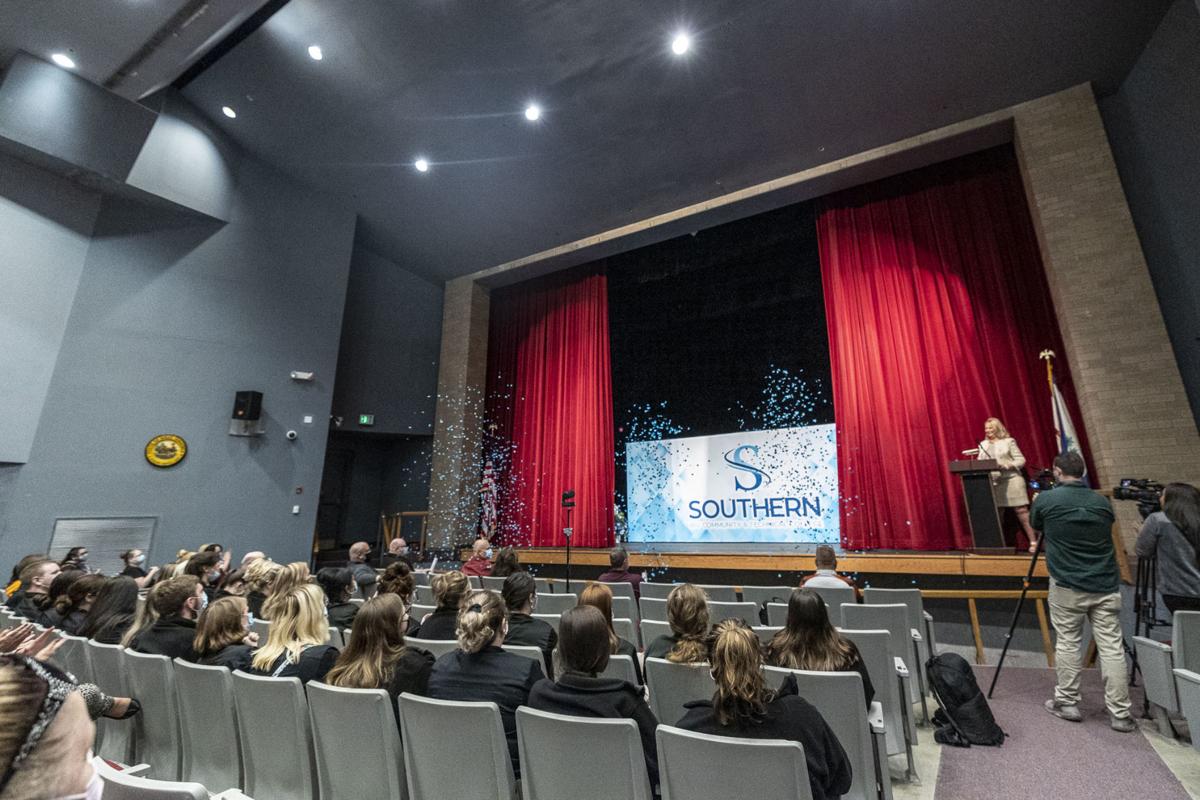 Confetti is released as the new logo for Southern West Virginia Community and Technical College is revealed during a press conference in the Savas Kostas Performing Arts Center on Monday. 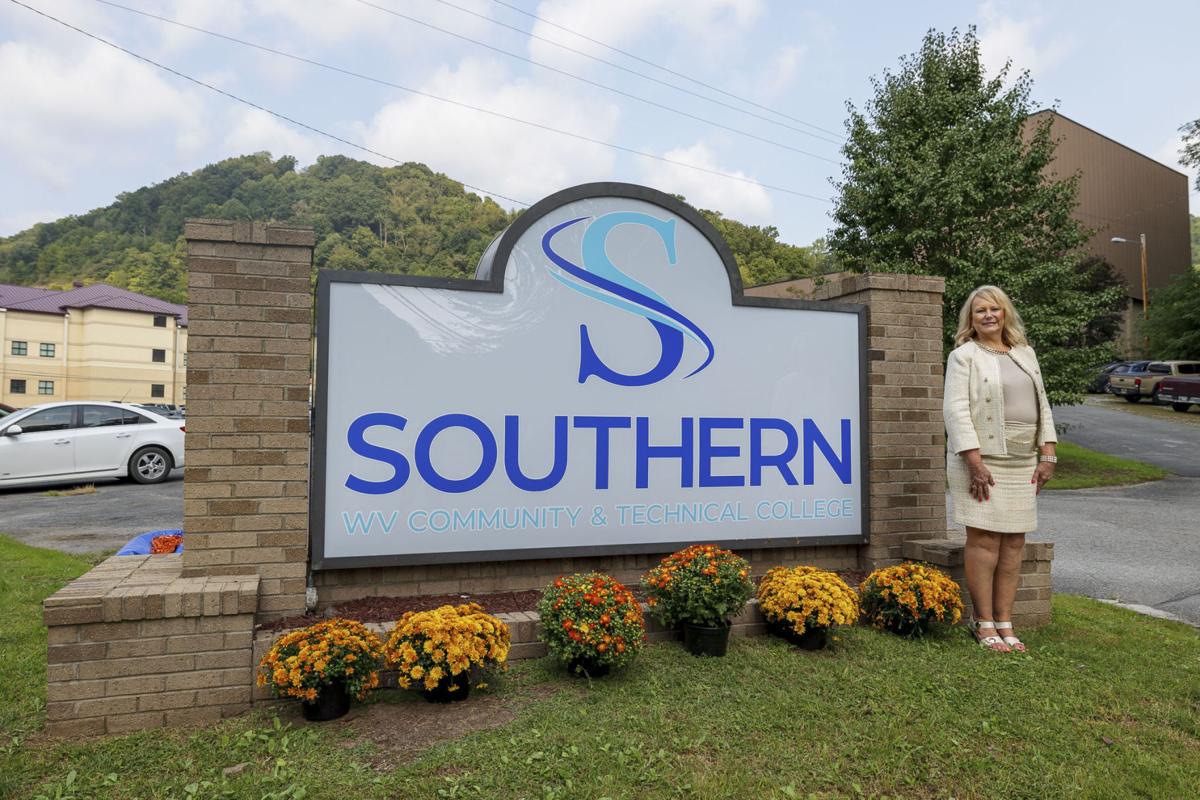 Southern West Virginia Community and Technical College President Dr. Pamela Alderman poses for a photo next to the Logan campus’s sign bearing the college’s new logo. The sign, which had been covered up, was finally revealed following the Monday press conference. 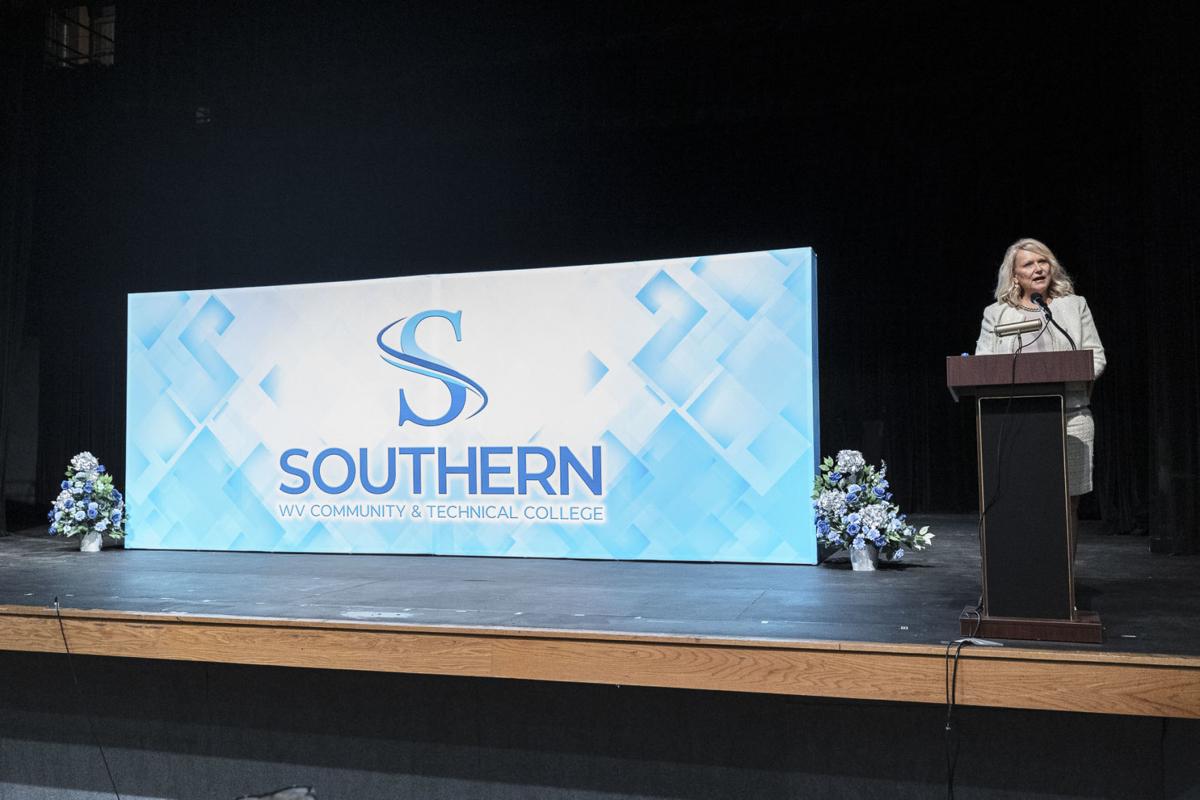 Confetti is released as the new logo for Southern West Virginia Community and Technical College is revealed during a press conference in the Savas Kostas Performing Arts Center on Monday.

Southern West Virginia Community and Technical College President Dr. Pamela Alderman poses for a photo next to the Logan campus’s sign bearing the college’s new logo. The sign, which had been covered up, was finally revealed following the Monday press conference.

MOUNT GAY — Southern West Virginia Community and Technical College kicked off its 50th anniversary with a press conference on Monday at its Logan campus that looked more like a party than a media event.

Music, balloons, giveaways and a huge custom-decorated cake, complete with the college’s new logo and colors, were all part of the celebration.

Southern is switching from its traditional black and gold flying S design to what college officials are calling “The Southern Blues.” President Pamela L. Alderman says the timing is perfect for rebranding.

“As we celebrate this milestone it just seemed appropriate to give our college a fresh new look,” she said.

Alderman went on to explain the significance of the new color choices.

“The blues are the roots that bear the fruits. The whole of life itself expresses the blues. The blues can be about anything pertaining to life. The blues represent our struggles, our journeys, and our triumphs,” she said.

In addition to revealing the new logo and colors, complete with a burst of blue confetti and the sounds of the Blues Brothers, Alderman made two additional announcements.

“We’ve been keeping a secret,” she revealed. “Today, we can finally let our employees know that Southern has been designated a ‘Great College to Work For.’”

The results, released Monday, Sept. 13, in a special insert of The Chronicle of Higher Education, are based on a survey of 196 colleges and universities. In all, 70 of the 196 institutions achieved “Great College to Work For” recognition for specific best practices and policies.

Southern won honors in the following categories this year:

Southern was also named to the Great Colleges Honor Roll, a status granted to only 42 colleges each year who are highlighted most across the recognition categories.

“This is a very satisfying affirmation of Southern, but our real goal is not recognition — it’s being a community that values the needs and contributions of every individual. In that sense everyone at Southern helps to make this a great place to work,” Alderman said.

The survey results are based on a two-part assessment process: an institution questionnaire that captured employment data and workplace policies from each institution, and a survey administered to faculty, administrators, and professional support staff. The primary factor in deciding whether the institution received recognition was employee feedback.

The employee survey underwent several changes this year, including the addition of 11 new survey statements, some of which are related to new survey themes around diversity, inclusion, and belonging, as well as faculty and staff well-being. New survey demographics related to gender identity and remote work were also included this year.

In accordance with the survey changes, the recognition categories for the program were also updated this year to better reflect current patterns and methodologies in employee engagement in higher education.

The “Great Colleges to Work For” program is one of the largest and most respected workplace-recognition programs in the country. For more information, visit the Great Colleges program website at GreatCollegesProgram.com and GreatCollegesList.com. ModernThink, a strategic human capital consulting firm, administered the survey and analyzed the results.

The second announcement during the press concert was that Southern is sponsoring a free concert by Landau Eugene Murphey Jr. at 7 p.m. Oct. 16 in the Savas Kostas Performing Arts Center, which is located on the school’s Logan campus.

“We are extremely proud to be partnering with Landau,” Alderman said. Murphy has recently been the poster child for GED education after he went back to school and earned his GED during the COVID-19 pandemic. “He understands the important role that education plays not only here in the Coalfields, but globally.”

“Landau’s Got Talent” will celebrate the 10th anniversary of his “America’s Got Talent” win that catapulted Murphy to celebrity status and launched his entertainment career.

“He is performing all the songs that did each week on the show, plus a few surprises,” Alderman said.

Southern has hired a professional sound and lighting company and Murphy is bringing his entire band.

“We want to make sure we do this right,” Director of Communications Bill France said. “His win brought the entire community together. Signs and banners were posted all over town.”

Fountain Place Cinemas held viewing parties of the TV show on the big screen each week and block parties were held as crowds gathered to dance and celebrate the hometown hero. “I was the DJ for those parties and they were tons of fun,” France said.

Tickets will be made available sometime in October.

“All we are asking is that everyone who wants a ticket donates to our college food pantry,” Alderman said. “We are asking for at least two non-perishable food items per ticket. Our food pantry serves our students and the local area. This is a way we can give back to those who need a little extra help.”

Ticket distribution will be made public on Southern’s Facebook page in October.