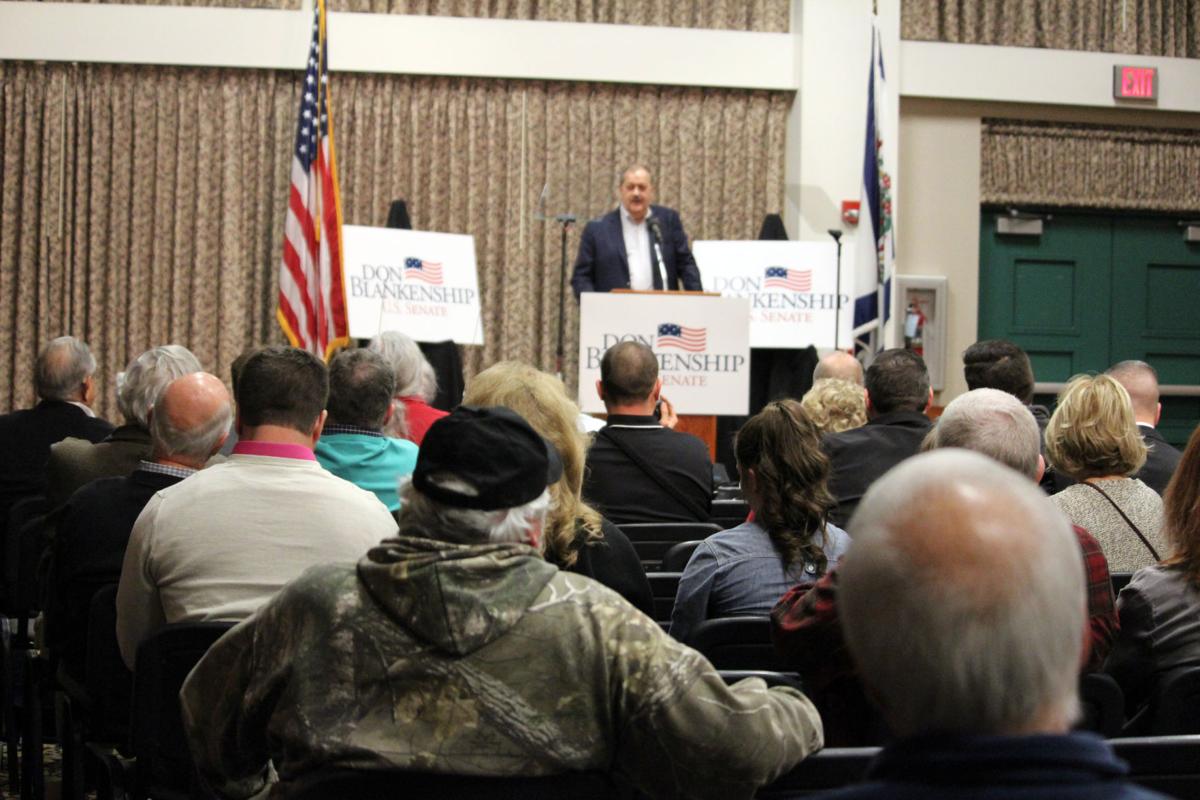 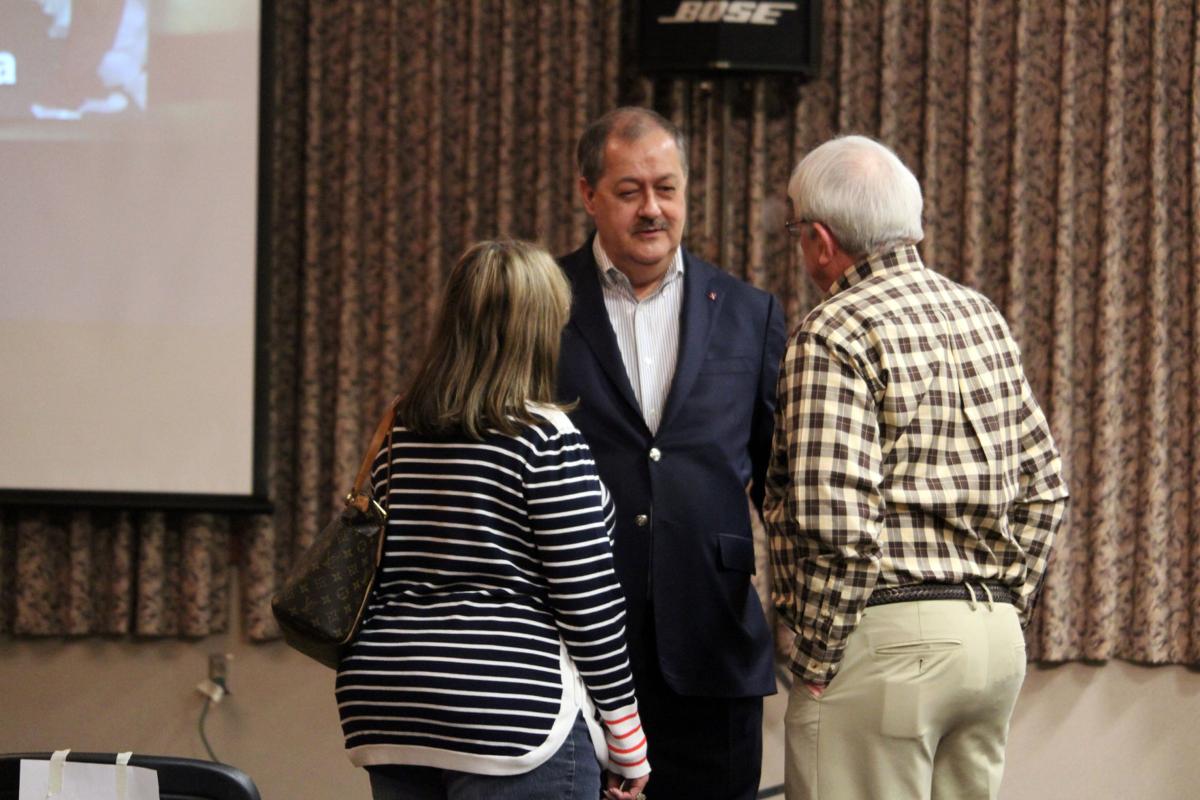 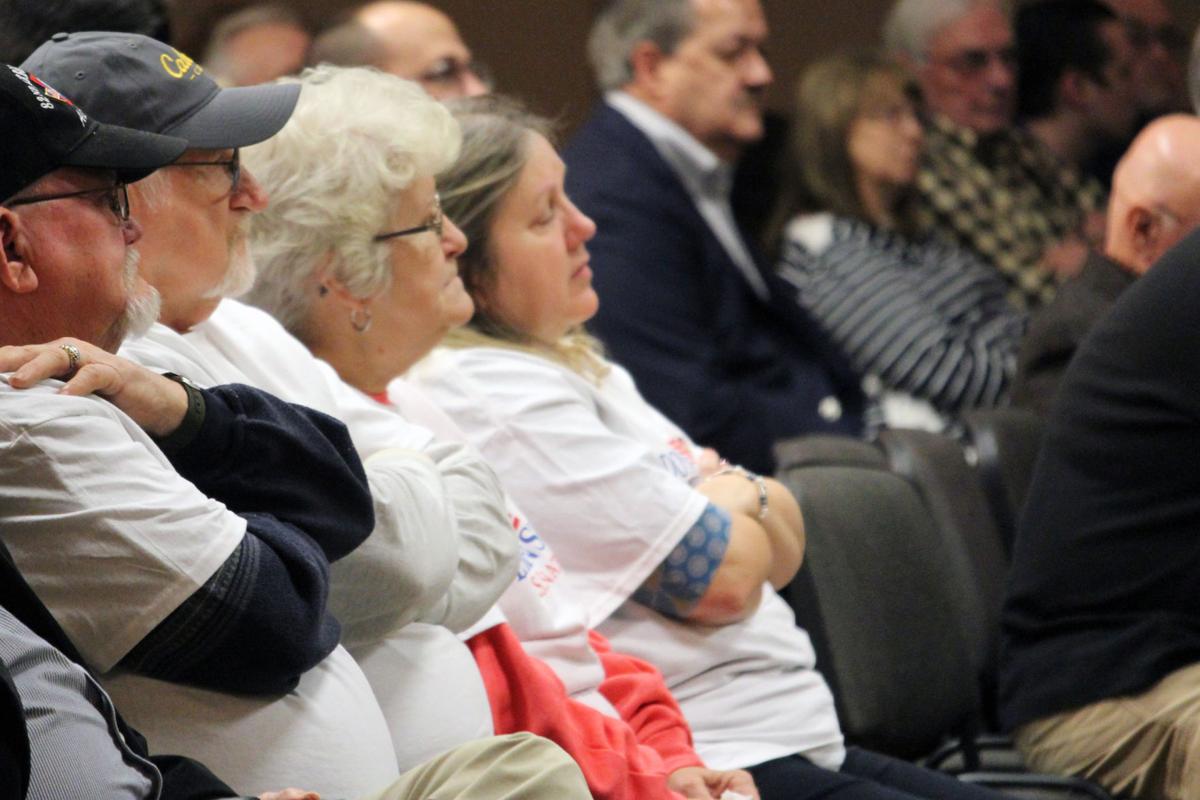 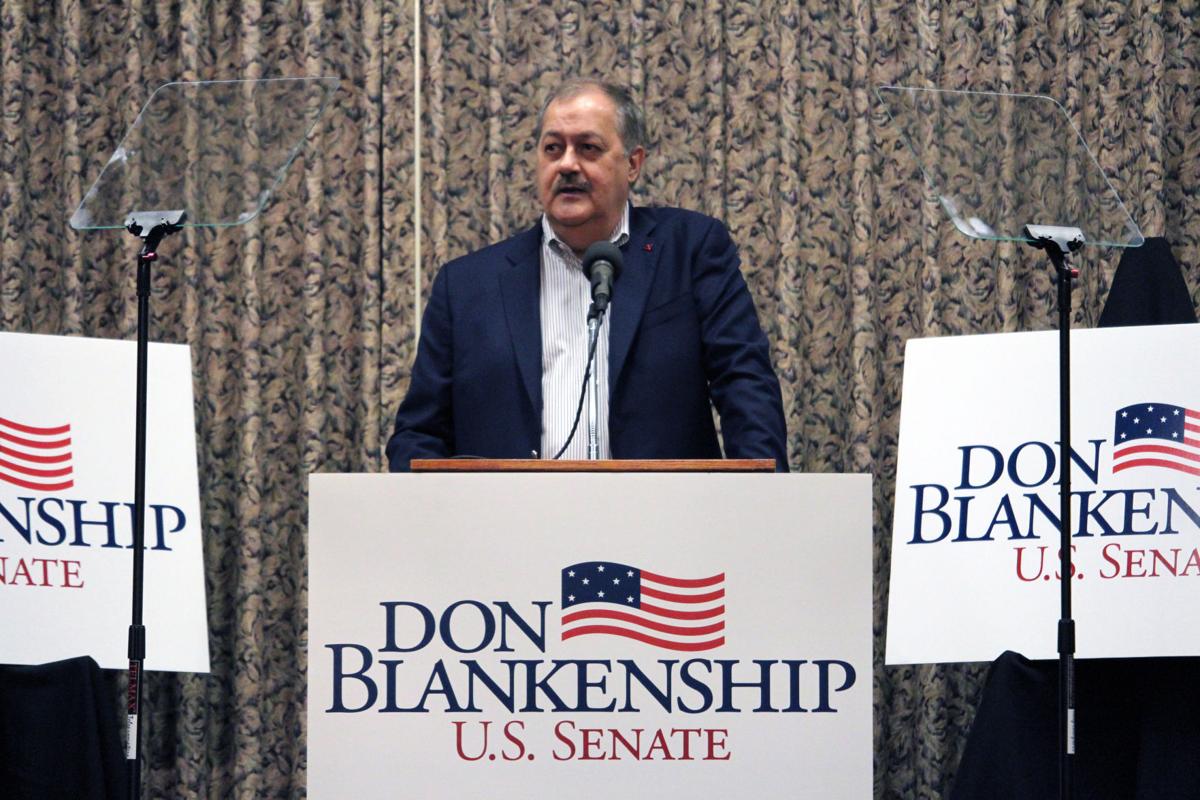 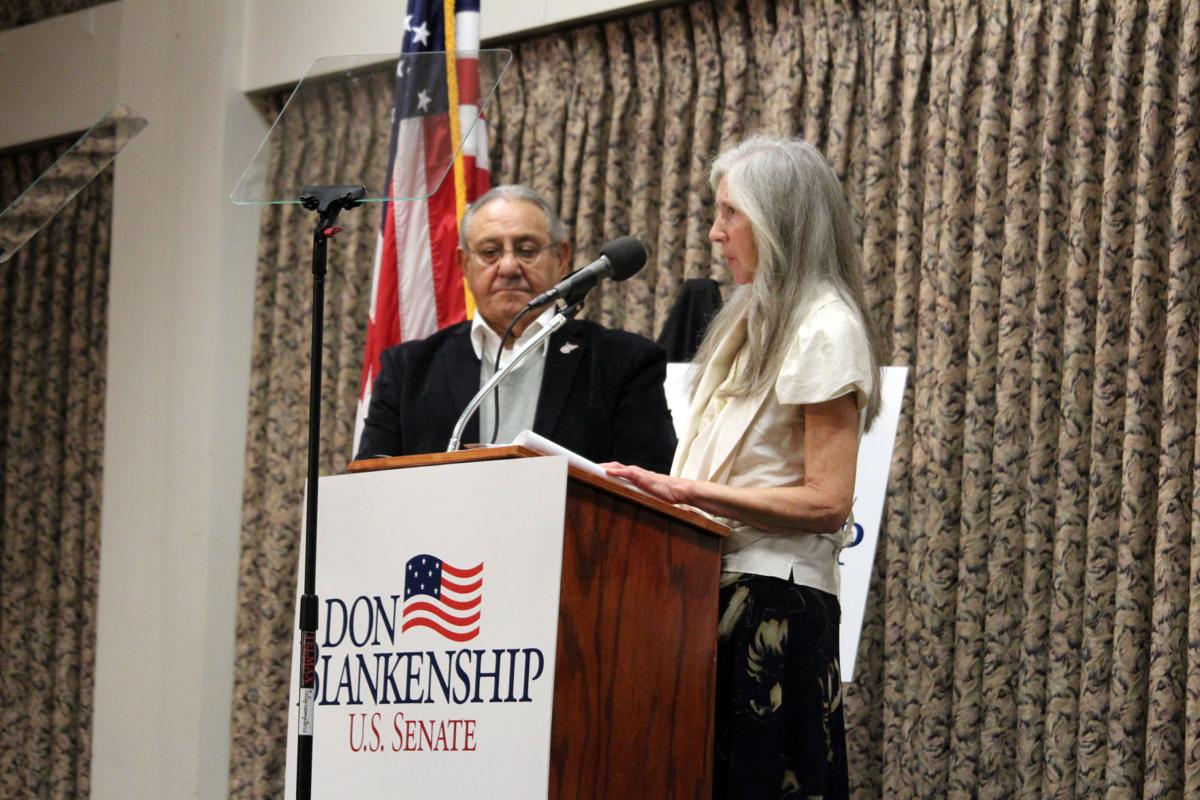 Nancy Peyton/Logan Banner Gwen Thomas, whose brother Grover Skeens was a miner killed in the Upper Big Branch Mine explosion, spoke briefly about her brother and why she supports Don Blankenship in the upcoming U.S. Senate election Thursday, Jan. 18, 2018. Thomas, right, is pictured on stage with Fred Joseph of Logan who was the emcee for the town hall.

Nancy Peyton/Logan Banner Gwen Thomas, whose brother Grover Skeens was a miner killed in the Upper Big Branch Mine explosion, spoke briefly about her brother and why she supports Don Blankenship in the upcoming U.S. Senate election Thursday, Jan. 18, 2018. Thomas, right, is pictured on stage with Fred Joseph of Logan who was the emcee for the town hall.

LOGAN - Supporters and skeptics alike were in attendance to hear ex-Massey Energy CEO Don Blankenship's appeal as to why he should be elected to the United States Senate.

Douglas Smith, a Logan native who spent 21 years working as a federal mine inspector, shared his complete support for Blankenship before the town hall meeting Thursday night.

"One of the things that impressed me when picking up these pamphlets tonight is that he would be instrumental in helping Trump clean out the swamp in Washington, D.C.," Smith said. "Whenever I look at a party that supports abortion and gay rights and all of that, and you go along just because you're in the party and you follow the party lines; that's not kosher to me. You should be an independent person, no matter if you're a democrat or a republican, when it comes to major issues that involve the welfare of this nation."

Chris Trent of Man said he knew going into the night that many of his views did not line up with Blankenship's, but he still wanted to hear what he had to say about the current issues facing Logan County and the state as a whole.

"I'm just generally interested in politics and I wanted to hear what Mr. Blankenship had to say and his views on West Virginia," Trent said. "It really wasn't a show of support, I tend to lean towards Evan Jenkins in the primary. (After hearing him speak) I'm still unsure of Mr. Blankenship."

Blankenship, who recently served a one-year prison term on charges related to the deadliest U.S. mine disaster in four decades, kicked off his U.S. Senate campaign Thursday at the Chief Logan Lodge, Hotel and Conference Center. He said he threw his hat into the ring for the Senate race because he was tired of seeing politicians from West Virginia simply "watch the parade go by" rather than working on policies that would improve the lives of the state's citizens.

Blankenship tried to resonate with voters by describing his own past. He said he was raised by a single mother in West Virginia and spent time early in his life working in a union mine.

"Like most of you, I grew up in West Virginia," Blankenship said. "I have seen the ugliness of poverty. I agree that the poor are important because even some former miners who worked for Massey are now among the poor. So are many of the widows of coal miners who have passed because their pension plans have not kept up with inflation I've been around West Virginia coal miners most all of my life."

The audience of approximately 100 also included Gwen Thomas, whose brother Grover Skeens was a miner killed in the Upper Big Branch Mine explosion. Thomas delivered the invocation at the beginning of the event and spoke briefly about her brother and why she supports Blankenship in the upcoming election.

"One of the reasons I wanted to be here tonight was to set the record straight concerning the explosion at UBB because Don has been falsely accused," Thomas said. "He was convicted of a crime that he was not guilty of."

Thomas said she places the blame on the Mine Safety and Health Administration and claimed she has made continuous pushes to compel the organization to release reports on investigations at the mine in the time leading up to the explosion.

The 67-year-old Blankenship was released from a federal prison in California last year. He is currently serving one year of supervised release scheduled to end on May 9 - one day after the primary.

Blankenship received approval last August to have his supervised release transferred to federal officials in Nevada, where he has a home in Las Vegas.

He was sentenced in 2016 for a misdemeanor conviction of conspiring to violate federal mine safety standards at Massey's Upper Big Branch Mine in southern West Virginia, where 29 workers died in a 2010 explosion. He was acquitted of felonies that could have stretched his sentence to 30 years.

The U.S. Supreme Court rejected Blankenship's bid to appeal. He has insisted he's innocent, and that natural gas and not methane gas and excess coal dust caused the explosion.

Blankenship did not shy away from the subject of his prison sentence Thursday night, but instead made light of the situation.

"You see, I was born in the poor house," Blankenship said. "For the first 8 years of my life I used an outhouse Eventually I was invited and ate at the private dining table at the White House. And just last year, I lived in California in the big house."

Blankenship is most widely known for his association to the coal industry. He said Thursday that one of his main goals is to begin to bring coal jobs back to the area. He cited President Donald Trump's platform, stating that it's time to "put Americans first."

Blankenship said this could be done by ceasing implementation of environmental regulations "until the budget is balanced," as well as "eliminating regulations every month until the economy is growing like China's."

Blankenship was asked about how he would address the current drug epidemic in West Virginia and across the nation, to which he said "it has to be squashed."

"It has to be cured," he said. "The cost of doing so will be high, but the cost of not fixing the drug epidemic will be fatal for our country."

Citizens also brought forth concerns about the infrastructure in the state. James Quick, a local business owner, said he "counted 900 patches in the road" on his drive from Chapmanville to the convention center that evening. The stretch of road Quick was referring to is less than a 10-minute drive.

Blankenship once again referred to Trump's "America first" rhetoric. He said the country needs to "quit building roads in Iraq and start building them here."

Other issues Blankenship discussed included his opinions that education in the state should turn away from Common Core State Standards, that he feels funding for Planned Parenthood should be cut and that "illegal is illegal" in terms of immigration laws. He also agreed with Trump's plans for a border wall.

Blankenship said the current trade policies are filtering too many jobs overseas, and are only intended to "make Wall Street rich and the mainstream poor."