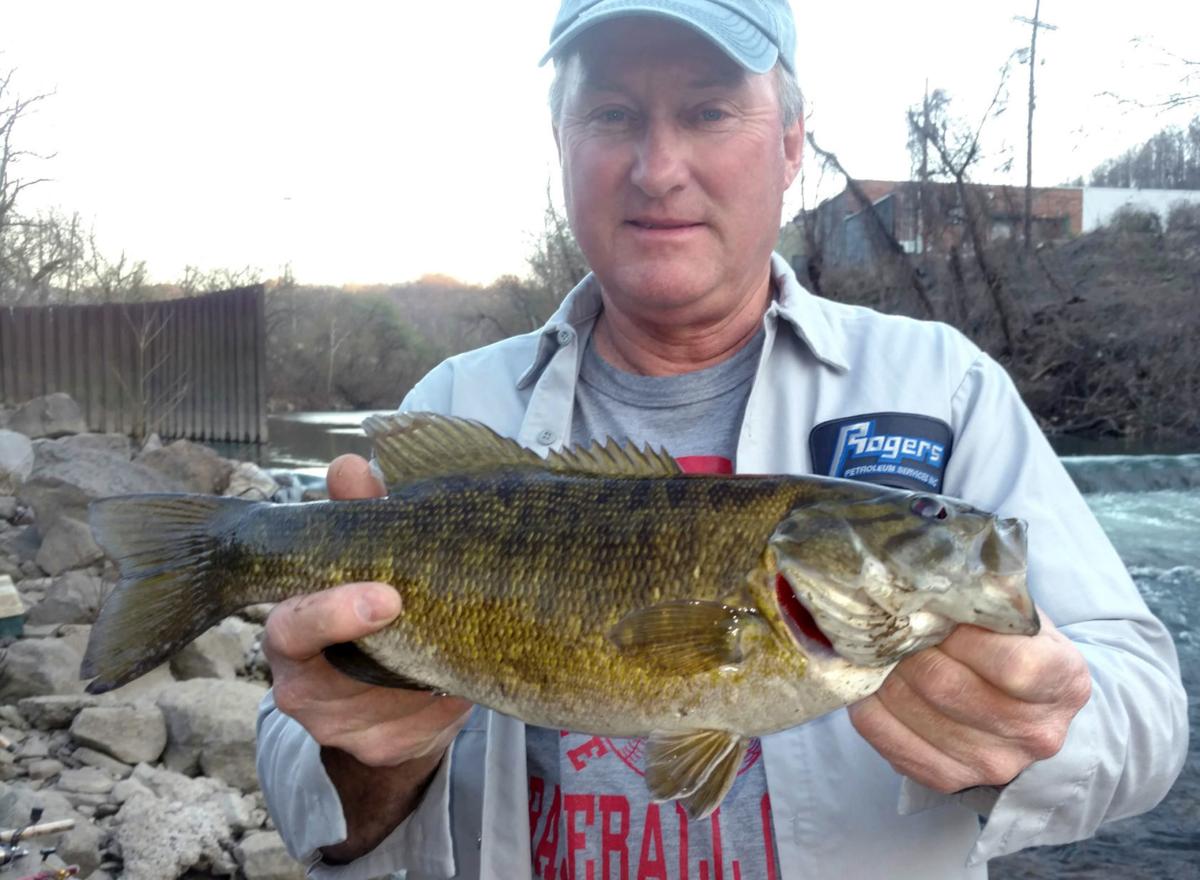 ABOVE: Pete Runyon, who heads up the Friends of Tug Fork, believes a proposed water trail will allow other anglers to catch smallmouth bass like the one he landed near the water treatment plant in Williamson. 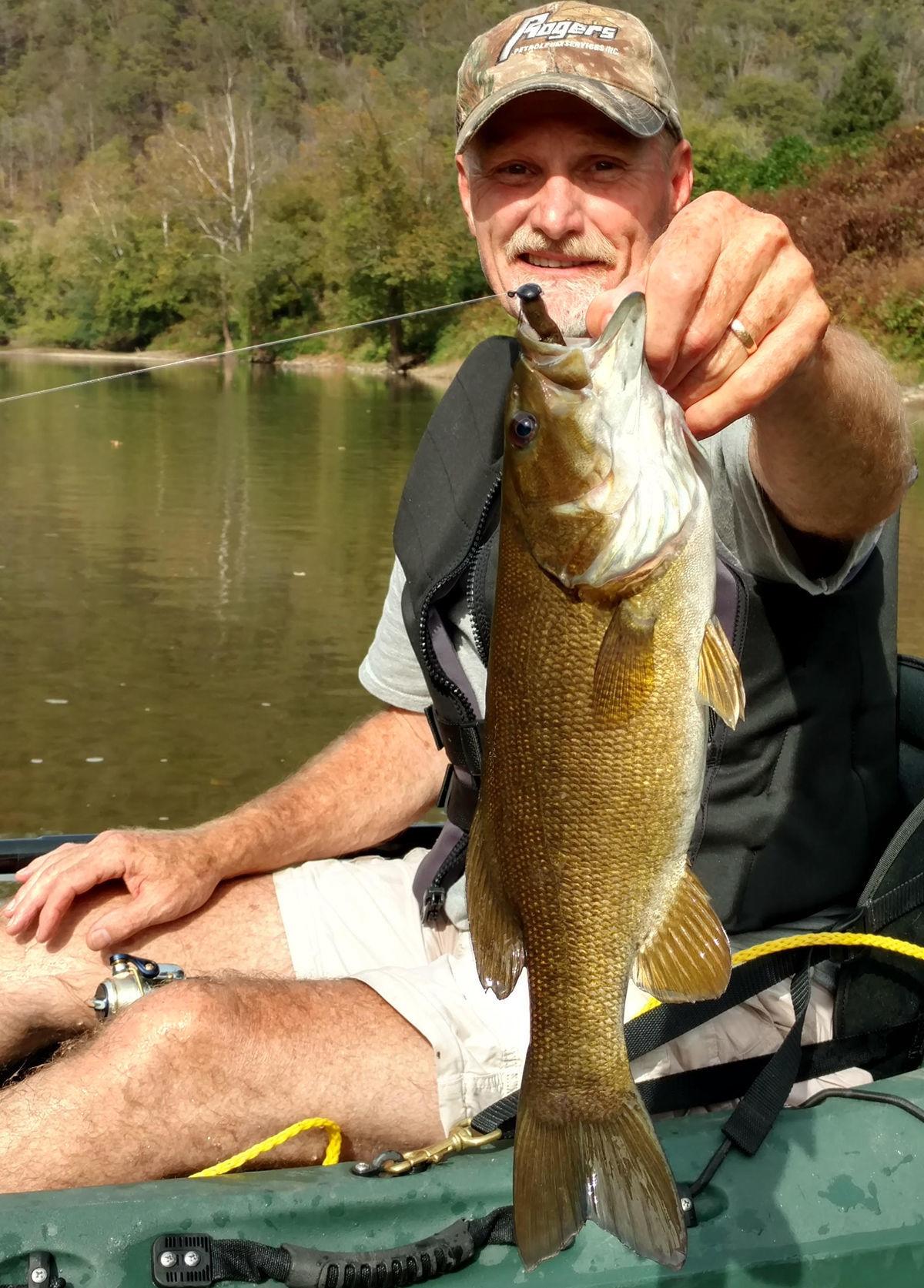 A river trail would provide access every 4 to 5 miles along the Tug, which would be a boon to kayak anglers such as Charles Runyon. 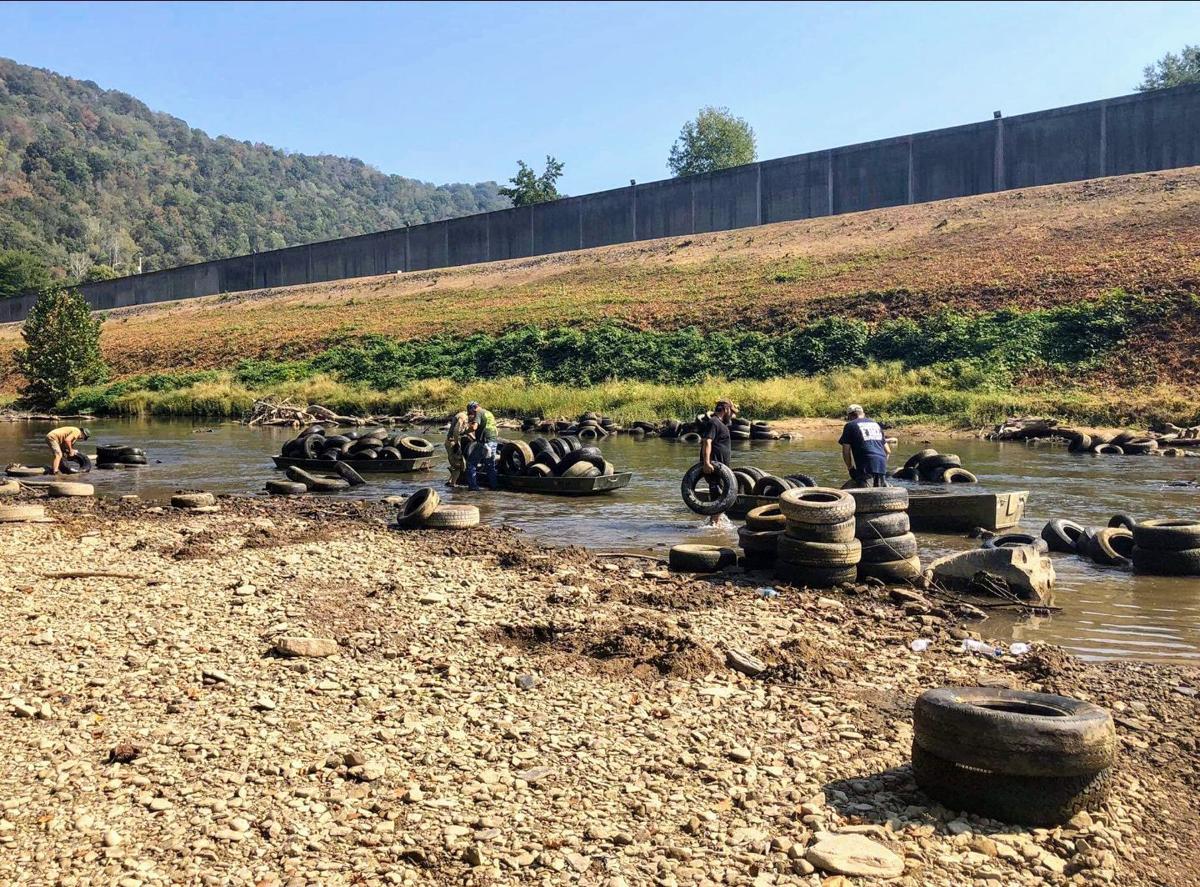 LEFT: The Tug Fork’s water quality has improved over the past few decades, and lately volunteers have taken it upon themselves to remove man-made debris. A recent cleanup effort on a half-mile stretch of the river at Williamson turned up more than 2,000 discarded automobile tires.

ABOVE: Pete Runyon, who heads up the Friends of Tug Fork, believes a proposed water trail will allow other anglers to catch smallmouth bass like the one he landed near the water treatment plant in Williamson.

A river trail would provide access every 4 to 5 miles along the Tug, which would be a boon to kayak anglers such as Charles Runyon.

LEFT: The Tug Fork’s water quality has improved over the past few decades, and lately volunteers have taken it upon themselves to remove man-made debris. A recent cleanup effort on a half-mile stretch of the river at Williamson turned up more than 2,000 discarded automobile tires.

MATEWAN — For years, West Virginia’s Tug Fork River has been home to one of the state’s better smallmouth bass fisheries.

Problem was, not many people knew about it.

Local anglers did, but they didn’t talk much about it. The river’s remote nature and a lack of public boat access kept outsiders from trying to fish there.

That might soon change. Anglers and tourism officials have taken the first steps toward creating a series of public access sites along the river from Welch in McDowell County to Fort Gay in Wayne County.

The effort, spearheaded by the grass-roots Friends of Tug Fork group, took a step forward on Oct. 23 when stakeholders got the results of a preliminary study of potential access sites. Engineers from the Thrasher Group had identified 124 locations along the stream where access might be possible. The stakeholders’ group, composed mostly of local anglers familiar with the watershed, told the engineers which ones held the most promise.

“We’re trying to create an official West Virginia Water Trail,” said Pete Runyon, leader of the Friends of Tug Fork. “To do that, we need to have reliable public access sites every 4 to 6 miles.”

A similar trail has been established along the Coal River in Raleigh, Boone, Lincoln and Kanawha counties, and it has triggered a significant increase in the number of anglers and recreational boaters.

“That’s what we’re hoping to accomplish on the Tug,” Runyon said. “Not a lot of people realize how beautiful this river is, and what a great fishery it has become.”

The Tug rises in the heart of West Virginia’s coal-mining region and cuts a path through some of the state’s most remote and difficult-to-reach communities. One 12.5-mile section of the river in Mingo County is virtually roadless.

Until recently, pollution from open sewers and from the byproducts of coal mining kept the Tug from approaching its potential as a fishery. Declines in mining and increases in sewage treatment have helped restore the river’s water quality.

“It’s better today than it has ever been in my lifetime,” Runyon said.

He said an acquaintance who returned to the river after a long absence couldn’t believe the difference.

“He had fished it in 1974, and said it was nothing but pure pollution,” Runyon continued. “He came back this summer, and I took him up the river to fish. He was amazed. He said it was as pretty a place as he’d ever been.”

Recent cleanups have made a significant difference in the river’s appearance. A recent tire cleanup on a half-mile stretch of the Tug near Williamson turned up 2,321 discarded automobile tires, some of which had been mired in the riverbed for decades.

“Smallmouths are what everyone fishes for, but there are also rock bass, spotted bass and the occasional largemouth,” Runyon said. “There are lots of catfish, some sunfish and even some muskies.”

The Tug forms the border between West Virginia and Kentucky along most of its length, and the Kentucky Department of Fish and Game has monitored the fishery’s improvement over time.

The fish, he added, tend to be good-sized.

“Twenty-inch smallmouth are pretty common,” he said. “Most of the smallmouth are 16 inches or less, but there are enough nice fish to keep things really interesting.”

Runyon said that for years, the lack of a reciprocal fishing agreement kept Kentuckians from fishing on the river’s West Virginia side, and vice-versa. That situation changed in 2015, when a reciprocal agreement finally went into place.

One year after that, Runyon founded the Friends of Tug Fork page on Facebook, with the idea of creating a community of anglers and other people interested in improving the river’s recreational potential.

He believes the establishment of a river trail, if and when it happens, will put the Tug firmly on anglers’ maps.

“The river is great for kayak fishing,” he said. “The problem, right now, is access.”

At the Oct. 23 meeting, representatives of the Thrasher Group were able to narrow their focus on the 124 sites they’d identified. Some were owned by private citizens, others by the Norfolk Southern Railroad. Some had riverbanks too steep for boats to launch.

“The people who live here will access the river the way they always have,” Hafley added. “We want to make it so people from outside the area can come in and have similar access.”

Christy Bailey, executive director of the National Coal Heritage Area Authority, said establishment of a water trail would help to further diversify the economy in an economically depressed part of the state.

“We look at tourism as a low-hanging fruit for economic development,” Bailey added. “The Hatfield-McCoy [ATV] Trail is great, but we need other things. A water trail could be that thing.”