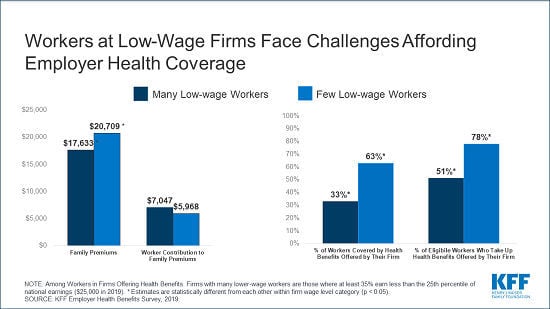 HUNTINGTON — Thomas Hart can’t remember the last time he got a pay raise, but he says his health care costs continue to rise every year.

“My cost for my insurance goes up, my deductible went up and my out-of-pocket costs are up, too, but my pay is the same,” he said recently. “It’s like I have been getting a pay cut over the past several years.”

Hart didn’t want to name his employer and understands it is just passing increasing costs along to employees, while the company he works for continues to see its health care costs for employees increase as well.

Overall, health care costs are growing at a faster rate than wages or inflation, according to a recently released report from the Kaiser Family Foundation (KFF).

Annual family premiums for employer-sponsored health insurance rose 5% to an average of $20,576 this year, according to the 2019 benchmark KFF Employer Health Benefits Survey.

The report says while wages and inflation have cumulatively increased 26% and 20%, premiums are cumulatively up 54% over the past decade, while deductibles have skyrocketed 162%.

“The single biggest issue in health care for most Americans is that their health costs are growing much faster than their wages are,” KFF President and CEO Drew Altman said. “Costs are prohibitive when workers making $25,000 a year have to shell out $7,000 a year just for their share of family premiums.”

The report said on average, workers in 2019 contributed $6,015 toward the cost of family coverage, with employers paying the rest.

Currently, 82% of covered workers have a deductible in their plan, similar to last year.

“The average single deductible now stands at $1,655 for workers who have one, similar to last year’s $1,573 average, but up sharply from the $826 average of a decade ago,” the report said.

Meanwhile, more than a quarter, or 28%, of all covered workers, including nearly half, or 45%, of those at small employers with fewer than 200 employees, are now in plans with a deductible of at least $2,000, almost four times the share who faced such deductibles in 2009. One in eight, or 13%, now faces deductibles of at least $3,000.

“Employer-sponsored coverage doesn’t come cheap for employers or workers, and many who work at low-wage firms or small business likely find it too costly to cover their families,” said Gary Claxton, a KFF senior vice president and director of the Health Care Marketplace Project, and the lead author of the study.

When it comes to the Affordable Care Act (ACA), also known as “Obamacare,” the average monthly cost of health insurance in the marketplace for West Virginia residents is $666 a month, or $7,992 a year, which represents an 18% increase from 2018, according to the 2020 Health Insurance report from ValuePenguin.com by LendingTree.

“Additionally, we found that Bronze policies saw the largest percentage premium increase of 21%, or an average of $101 per month,” the report said. “Catastrophic policies, which had the lowest rate change, cost $36 more on average in 2020.”

“Options such as taking a serious look at well-designed, single-payers or universal coverage systems and increasing regulation of the health care industry,” she said. “Right now, we are experiencing unsustainable cost growth in health care, making affordable access a challenge for millions of Americans. It is important to advance the understanding of health care costs for consumers in order to understand the different Medicare for All and other proposals that build toward universal coverage as well as the fiscal implications around each of these policies.”

Ice said other ways to increase regulation of the health care industry could help tremendously.

“We understand the need to regulate power and utilities, at least to some extent; health services are just as vital,” she said. “Yet we take a hands-off policy approach.”

In a conversation with Ice, Stoll said lower wage workers are less likely to have insurance through their employer and as premiums rise.

“They are forced into plans with less coverage or they can afford no coverage at all,” Stoll said. “The Affordable Care Act’s premium subsidies have helped here, but we still lightly regulate insurance company profits or do a good job at looking at premiums taken in versus actual health services provided.”

Both Ice and Stoll say employers are not really the problem or the bad guys.

What drives underlying health care cost increases in the U.S.?

“The same causes have been in place for decades, and yet we fail as a nation to create policies that can address some of these drivers,” Ice said.

“And we do not really regulate or negotiate to achieve better prices,” she said. “We don’t even demand to understand how drugs are priced and who is making money in the distribution chain, from manufacturers down to consumers, with players in the middle.”

Ice says the national expectation is that cost should not be a factor in care decisions.

“Yet our health care system is not designed to truly share costs across all Americans regardless of income or health status,” she said. “Our health system is overall not prevention driven. We treat health problems — we don’t prevent them from happening.”

Ice says West Virginians are growing older and sicker and the state faces a rise of chronic illness and obesity.

“And we still often pay doctors, hospitals and other medical providers for doing more, rather than being efficient. We do not pay for results,” she said. “There are multiple drivers of rising health care costs and no magic bullet to fix them.”