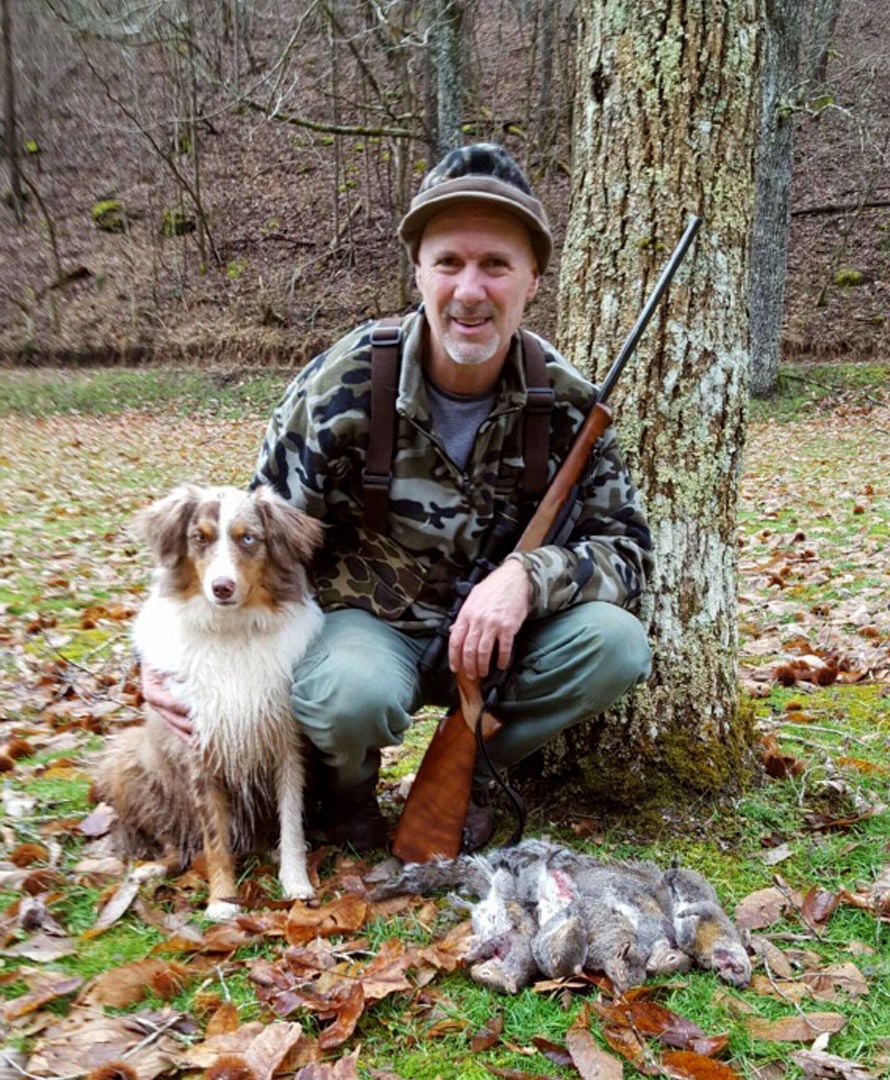 Five-squirrel days during the dead of winter aren’t at all unusual for Ed Hamrick, thanks to Bella, his squirrel dog. While Australian shepherds aren’t often thought of as hunting dogs, Hamrick swears by the four he has owned over the past 40 years. 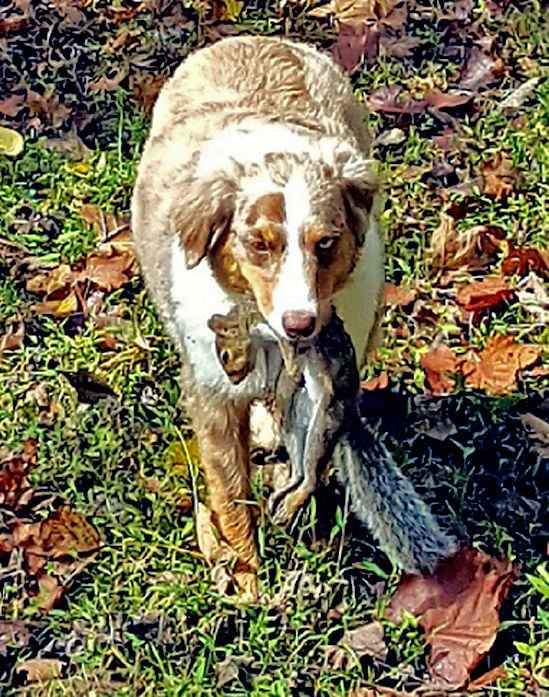 Not all Australian shepherds can be taught to retrieve, but Hamrick said two of the four he’s hunted with picked up the skill. 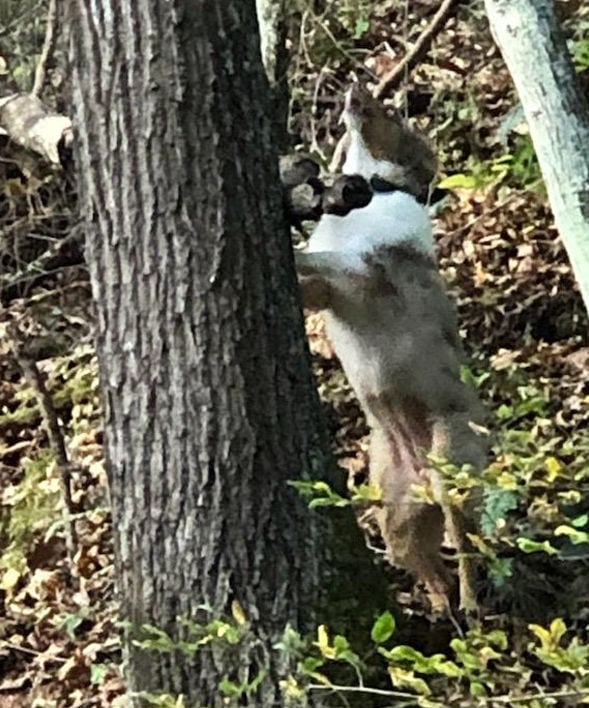 When Bella sees or hears a squirrel, she runs to the base of the tree the squirrel is in and barks. Hamrick said the dog often distracts the squirrel and allows him to get a clear shot.

Five-squirrel days during the dead of winter aren’t at all unusual for Ed Hamrick, thanks to Bella, his squirrel dog. While Australian shepherds aren’t often thought of as hunting dogs, Hamrick swears by the four he has owned over the past 40 years.

Not all Australian shepherds can be taught to retrieve, but Hamrick said two of the four he’s hunted with picked up the skill.

When Bella sees or hears a squirrel, she runs to the base of the tree the squirrel is in and barks. Hamrick said the dog often distracts the squirrel and allows him to get a clear shot.

It’s not unusual to see a hunter and a dog wandering through the woods.

It is a bit odd, however, when the dog is an Australian shepherd, not known as a hunting breed — and it’s looking for squirrels.

Curious as it might be, it makes sense to Ed Hamrick, who has squirrel hunted with Australian shepherds for 40 years.

“I guess it’s a little unusual to find someone who hunts squirrels with a dog anymore,” said Hamrick, a two-time former director of the West Virginia Division of Natural Resources.

“And it’s also kind of unusual to see this breed used for that purpose. But I’ve had good success with my dogs, so I’ve stuck with them.”

He got his current dog, Bella, two years ago when he retired from a long career in state government.

“She was my ‘retirement puppy,’” he said. “It didn’t take her long to become a good squirrel dog.”

When Hamrick and Bella go hunting, he walks slowly through the woods. Bella stays 50 to 60 yards ahead, listening and looking for squirrels. Occasionally, Hamrick said, she picks up a squirrel’s scent.

“We move along at a pretty measured pace, walking and pausing,” he said. “When she locates a squirrel, she goes to the base of the tree the squirrel is in and barks.”

Killing the squirrel becomes a game of hide-and-seek. When squirrels see a human, they ordinarily circle to the opposite side of the tree and hide.

“You can spend a lot of time moving around, trying to get a shot,” Hamrick said. “A good dog will circle to the opposite side and attract the squirrel’s attention, jumping around and barking. Either the squirrel will circle back to the side you’re on, or it will freeze there while you circle around to the side it’s on.”

After Hamrick drops the squirrel from the tree with a shot from his bolt-action .22 rifle, he has the luxury of watching Bella fetch it for him.

“Two of the four squirrel dogs I’ve had would also retrieve,” he said. “That comes in handy when the squirrel falls on the downhill side of the tree in a steep ravine.”

Other dog breeds — mountain curs, feists and Norwegian elkhounds — are better known for squirrel-hunting ability than Australian shepherds. Hamrick prefers the Australian breed because, as he said, “They are great companions for the rest of the year.”

When he trains a squirrel dog, Hamrick first teaches them the basic canine obedience commands — come, sit, stay. Once the dog is reliable at responding to those commands, he takes them to the woods.

“When I trained my first dog, Nikki, I would have her sit beside me until a squirrel appeared and then let her chase it,” he recalled. “All dogs have a natural instinct to chase after squirrels. When she ran the squirrel up a tree, I’d go to her and praise her for it.”

Some dogs bark when they tree a squirrel, but some don’t. Hamrick said Nikki didn’t bark until she got bitten by a wounded squirrel.

“After that, she always barked,” he said.

“Nikki helped train Patches, and Patches helped train Molly,” he said. “There was a gap between Molly and Bella, so I had to train Bella by myself.”

Hunting with dogs can be surprisingly productive. Last year, Hamrick and his brother, Mike, experienced that first-hand.

“Bella treed a squirrel during the time of year when breeding was taking place,” Hamrick recalled.

“When that’s happening, sometimes you’ll find a female squirrel with four or five males following her. When Bella treed that squirrel, we found a total of six squirrels in that tree and the tree next to it. We ended up getting four of them.”

Hamrick said hunting squirrels with a dog “is a great way to introduce kids to squirrel hunting.” When his twin sons, Jamie and Hunter, were ready to begin hunting, he took them afield with Patches and Molly.

“When you hunt with a dog, you don’t have to worry about scent control, sitting still or being particularly quiet,” Hamrick said. “The targets are usually stationary, and the kids’ chances at success are greater. In addition, kids just seem to like hunting with dogs.”

West Virginia’s squirrel season begins in early September and runs through the end of February. Most of Hamrick’s squirrel hunting takes place in December, January and February.

“I like hunting the late part of the season because the leaves are all down by then and squirrels are easier to see,” he said. “Wintertime is a great time to be in the woods. You see things you don’t ordinarily see — rubs, scrapes, trails, shed antlers. It’s also great exercise.

“It’s fair to say that squirrel hunting with a dog nowadays is a little unusual; it’s a unique way to hunt. It’s a lot of fun, and it’s a great excuse to spend time in God’s outdoors.”

Do you agree with the decision to push back the start of West Virginia schools to Sept. 8?