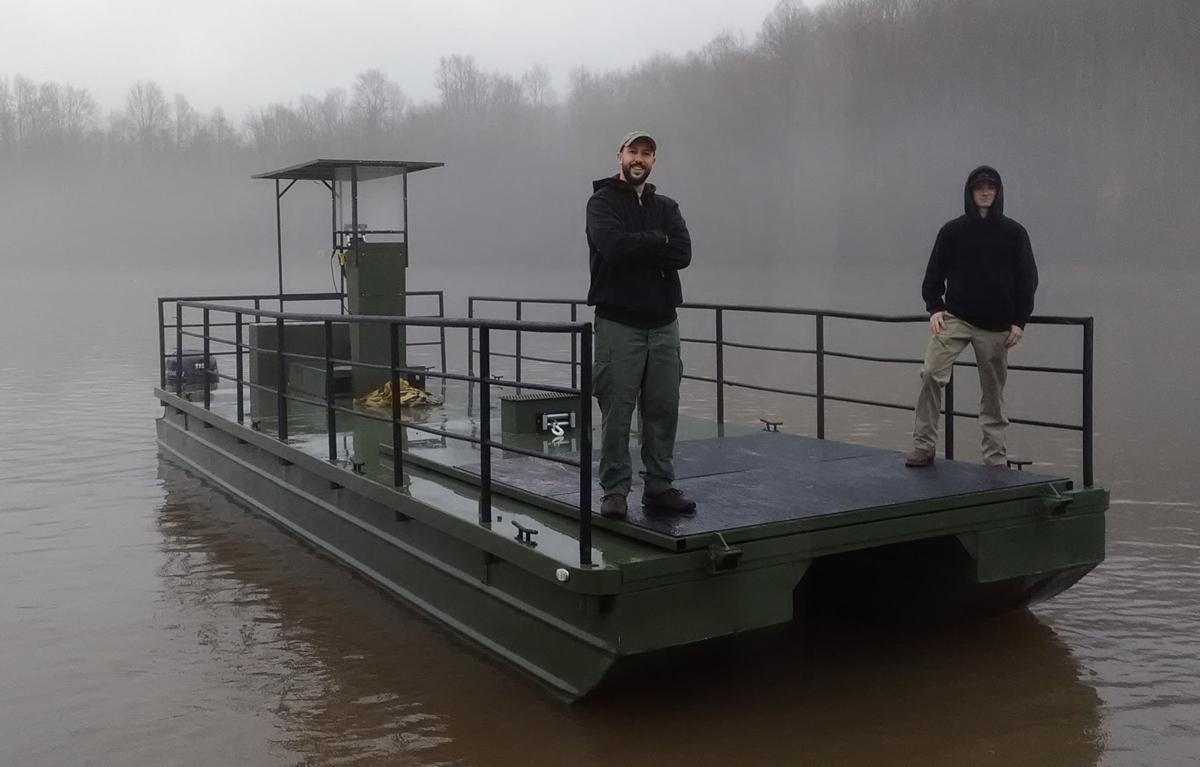 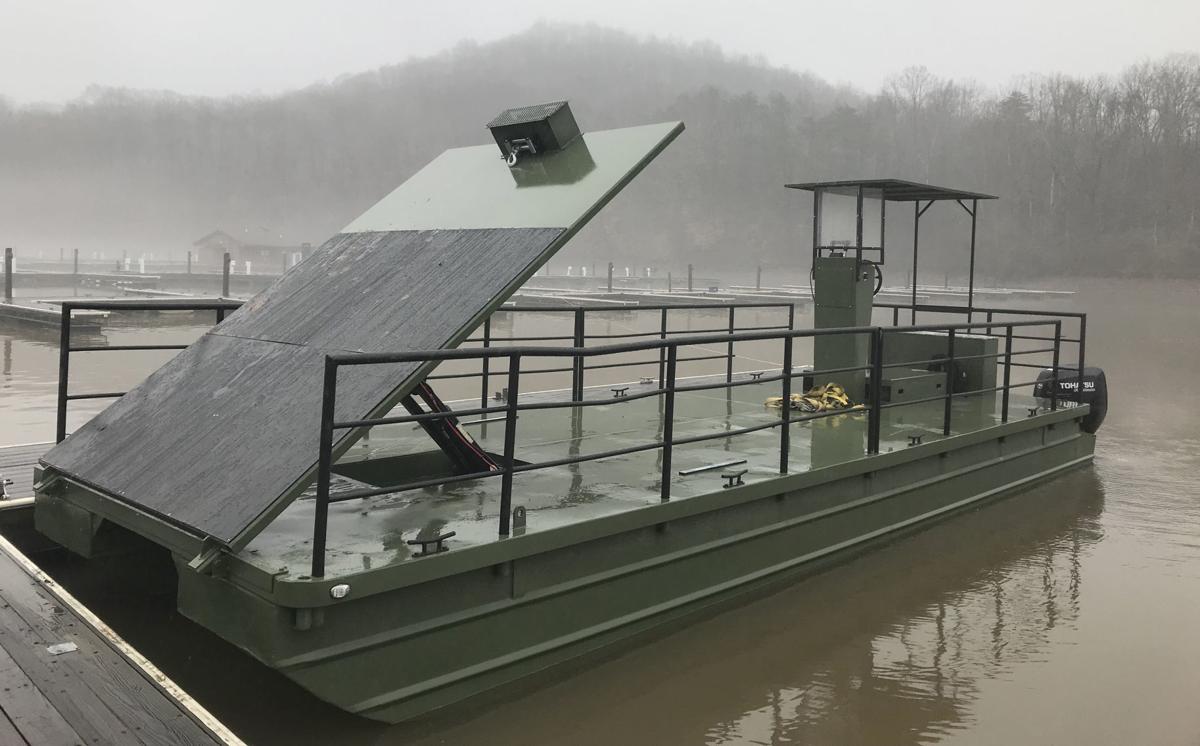 The barge features an 8-by-12-foot hydraulically lifted platform that will allow DNR workers to dump much larger clumps of trees than was ever possible before. 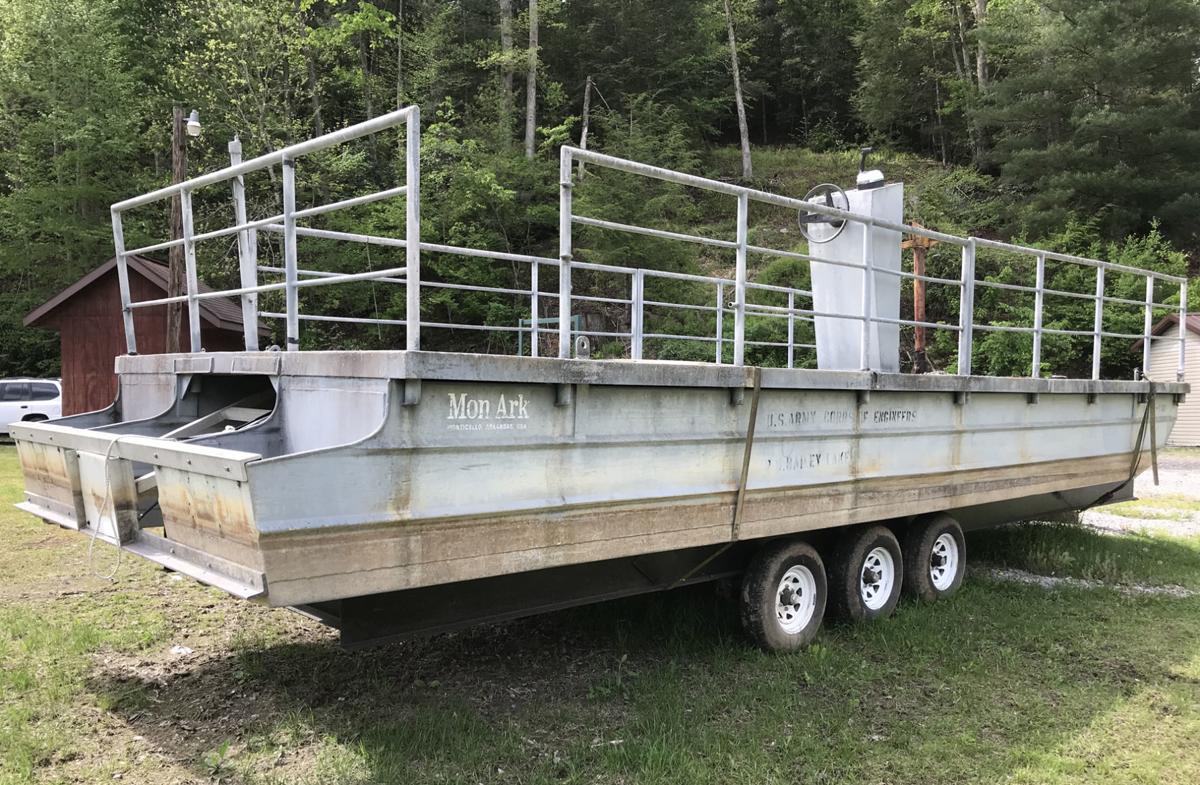 In its former life, the vessel served as a utility barge for the U.S. Army Corps of Engineers. The DNR purchased the boat as surplus property for just $500 and paid $42,000 to renovate it.

The barge features an 8-by-12-foot hydraulically lifted platform that will allow DNR workers to dump much larger clumps of trees than was ever possible before.

In its former life, the vessel served as a utility barge for the U.S. Army Corps of Engineers. The DNR purchased the boat as surplus property for just $500 and paid $42,000 to renovate it.

Like Capt. Quint in the movie “Jaws,” Aaron Yeager needed a bigger boat.

Now he has one, and with it he’ll be able to create more and bigger fish habitat in some of West Virginia’s most popular lakes.

The boat, a former U.S. Army Corps of Engineers utility barge, was recently fitted with a tilting platform that, in essence, turns it into a floating dump truck. Yeager and his Division of Natural Resources colleagues plan to load trees onto the platform and sink them into the lakes to create structures that not only attract fish, but also give young fish places to hide from predators.

“With this boat, can build some very effective habitat structures,” said Yeager, the DNR’s District 3 fisheries biologist. “We think we can use them to increase the fish-carrying capacity of our reservoirs.”

West Virginia’s large reservoirs, created from the late 1940s through the 1980s, were not built with fish in mind. Their primary function was to control floods, and it still is.

Before the lakes were filled, contractors cut and hauled away all the trees that would have been flooded. It made for a clean lake, but it also made for poor fish habitat.

“Most of our major reservoirs are biological deserts,” Yeager said. “If we’re going to increase their ability to produce fish, we need to create appropriate habitat.”

For years, DNR crews have collected discarded Christmas trees and have sunk them into lakes to create fish attractors. Fish do congregate near them, but they have a couple of drawbacks:

One, they only last a few years. Two, they don’t provide the sort of cover young fish need to evade predators.

Over the past couple of years, Yeager and a small crew have used heavy equipment to drag large trees onto the dry bed of Summersville Reservoir during the lake’s winter “drawdown” period. The larger structure has given yellow perch, in particular, a better place to hide from predators.

“Now that more young perch are surviving, growth rates for Summersville’s walleyes have increased,” Yeager said. “That’s just what we wanted to happen.”

Yeager wanted to expand the habitat work, but not many West Virginia lakes have winter drawdowns severe enough to allow access to the lakebed.

To sink large trees into most of the state’s other large impoundments, Yeager needed a bigger boat than the johnboats and skiffs he had used up to then.

He found one at Wyoming County’s R.D. Bailey Lake.

“The Corps of Engineers had an old barge they no longer needed, and they put it on their list of surplus property,” he recalled. “We were able to get it for just $500.”

Yeager had seen similar barges, outfitted with platforms that could be tilted like a dump truck’s bed, used by the Bass Angler Sportsman Society to create sunken brushpiles in Midwestern lakes.

DNR officials contracted with Rat’s Marine Service, in Flatwoods, to retrofit the barge with two motors, an 8- by 12-foot platform for the foredeck, a hydraulic lifting mechanism to raise the platform, and powerful winch to tow trees onto the platform. Yeager said the upgrades cost $42,000.

The Trooper Eric Workman Foundation, which often contributes to conservation-related causes, covered the cost of a stem-to-stern paint job. Yeager said he couldn’t be more pleased with the finished product.

“The barge was of a type that was made in the 1970s, commissioned by the Coast Guard to set buoys in coastal waterways,” he said. “They’re rated to haul up to 22,000 pounds. It’s a serious tool.”

The DNR’s smaller boats can only haul five to 10 Christmas trees at a time. Yeager said the barge will easily handle more than 50.

“We’ve had 200 Christmas trees delivered to Sutton Lake,” he added. “In three or four trips with the big boat, we’ll be able to put all 200 trees on the bottom. When you’re able to put 50 or more trees in a single pile, you’ve created some substantial habitat.”

Yeager said the barge will also allow crews to fell large trees along lakes’ shorelines and float them out into deeper water.

“We could winch the trees’ tops onto the platform, winch the trunks and larger limbs, and sink them anywhere in the lake we want them,” he explained. “With fresh-cut trees, we’ll be able to build better and longer-lasting structures than we can with dried-out Christmas trees.”

By summer, Yeager hopes to have his crews making “substantial” habitat improvements at reservoirs in his district.

Now that Yeager has his “bigger boat,” he’s already looking around for another barge to convert.

“I’ve heard some folks in Oklahoma have one of these they no longer need,” he said. “We’d like to get another one so we can get more of this work done.”