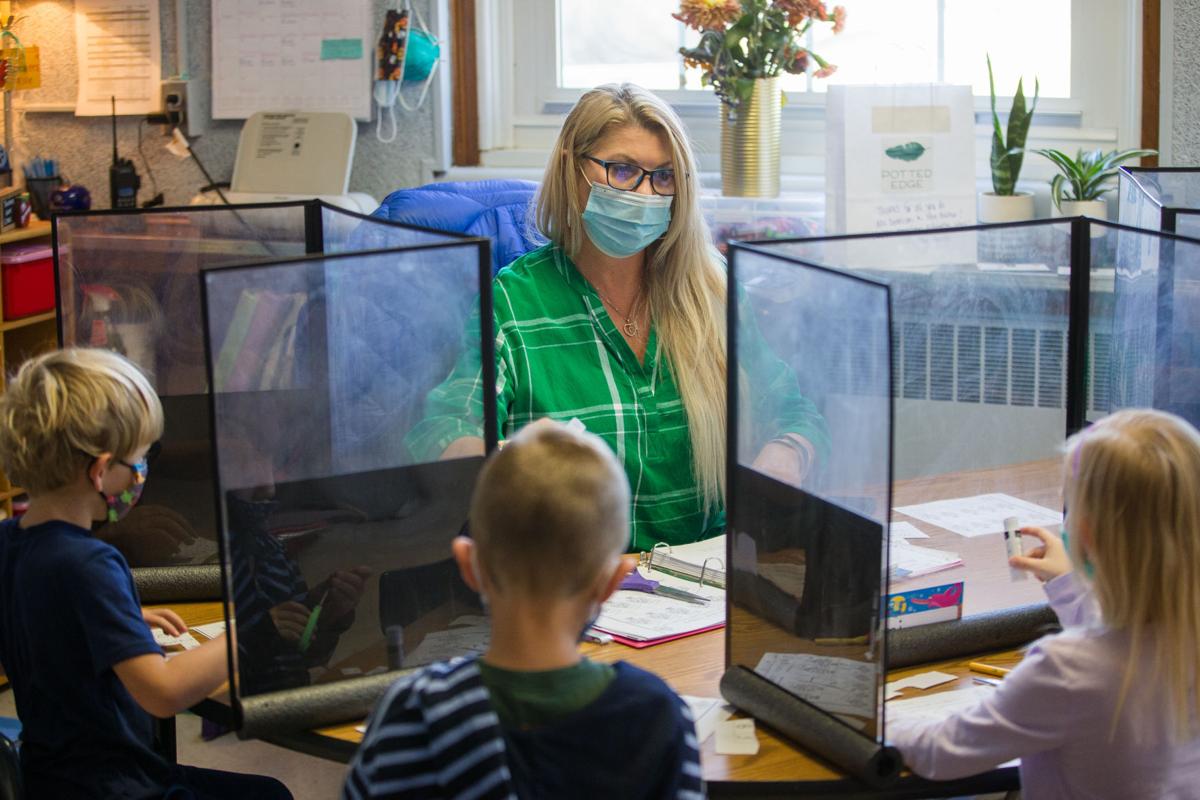 Kindergarten teacher Heather Dennison talks with students as they work on a project Nov. 20, 2020, at Meadows Elementary School in Huntington. West Virginia Gov. Jim Justice on Wednesday said all elementary and middle schools will be allowed to reopen Jan. 19 for in-person instruction. 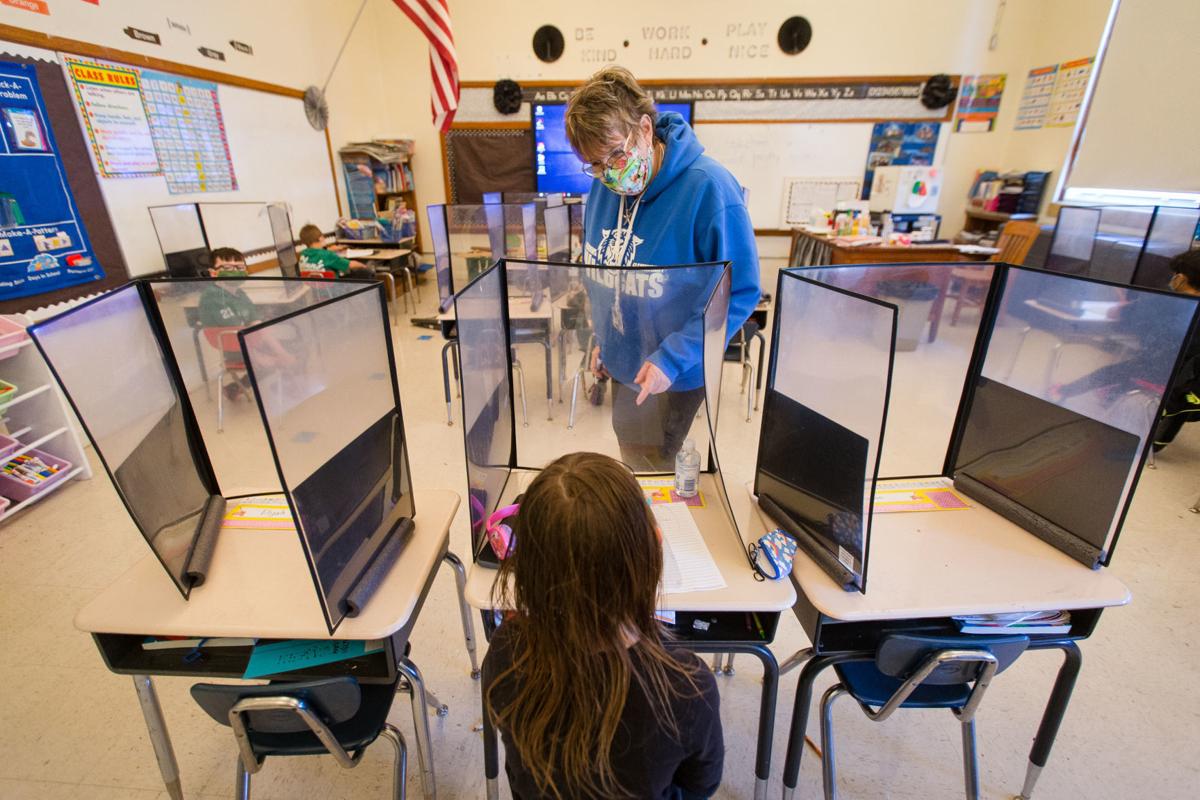 Substitute teacher Kathy Copley helps a student during a writing exercise at Meadows Elementary in Huntington. 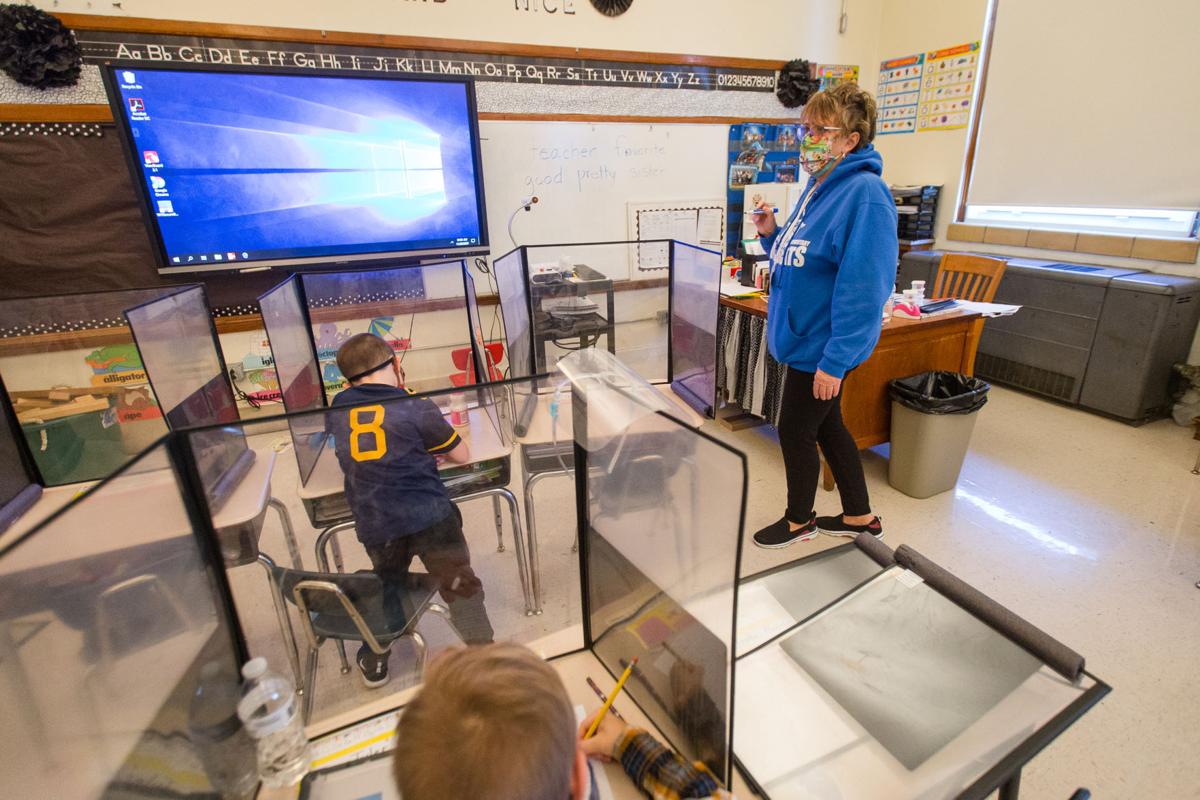 Kindergarten teacher Heather Dennison talks with students as they work on a project Nov. 20, 2020, at Meadows Elementary School in Huntington. West Virginia Gov. Jim Justice on Wednesday said all elementary and middle schools will be allowed to reopen Jan. 19 for in-person instruction.

Substitute teacher Kathy Copley helps a student during a writing exercise at Meadows Elementary in Huntington.

He announced Wednesday that all elementary and middle schools will be allowed to reopen Jan. 19 for in-person instruction. Previously, his administration required counties coded orange or red to shutter schools to all but special education students. High schools in all but red counties also will be permitted to reopen Jan. 19, the governor said.

The map’s colors are based on the number of new daily COVID-19 cases or the percentage of positive tests in counties overall, not in schools alone. Justice has loosened the map’s restrictions several times. The map and color-coding system was inspired by a Harvard Global Health Institute map.

Earlier this month, Ashish Jha, the Brown University School of Public Health dean who helped develop that guidance, offered new recommendations in conjunction with Harvard experts and others.

“Where schools opened up again with mitigation measures in place, we saw no evidence that schools drive significant community spread,” Jha said in a news release. “With the right controls in place, schools can even maintain lower infection rates than the community.”

The new guidance says “schools should use metrics of community spread as general points of information, not on-off switches for closure and opening, and should focus their own attention on developing ways to measure any in-school transmission and the quality of their infection control regime.”

West Virginia has provided little statewide information on the quality of infection control in some areas, such as ventilation in schools.

“There’s no question that kids learn better in front of a teacher, but, again, we’re putting people at risk,” said Dale Lee, president of the West Virginia Education Association school workers union. “Not only our educators, but we’re putting our students, parents and grandparents at the possibility of risk.

“We’re going to contact our members, our people, our leaders. And I’ve already heard from many of them who are feeling frustrated. The numbers are higher than they’ve been throughout. And for four months we’ve followed the map that said, ‘You’re red or orange. You’re not going back.’ Suddenly, we’re saying, ‘No, we were kidding; it’s really safe to go back.’”

Both he and Jay O’Neal, a Kanawha County teacher who’s part of the West Virginia United Caucus teachers group, noted that children are often asymptomatic. They aren’t routinely tested, making it difficult to know the degree of spread in schools.

“It feels a little bit crazy to me,” O’Neal said. “I mean, levels are at the highest they’ve ever been. We can assume, because of Christmas, they’re probably going to go higher, and so I’m just assuming, by Jan. 19, probably the levels will be higher than they are now.”

O’Neal said it is infuriating that the governor made the announcement at another online-only news conference where he doesn’t allow reporters in the room.

The return to in-person instruction will be for five-day weeks, the West Virginia Department of Education said.

“Special allowances will be given for four-day learning models in counties whose teachers are providing direct virtual-learning instruction to their own students,” the department said in a Wednesday news release.

Justice initially said Wednesday that schools would reopen Jan. 19, but then he said local control would be respected.

Even before the pandemic, state law provided for superintendents opting to close schools. State law says superintendents “shall … close a school temporarily when conditions are detrimental to the health, safety or welfare of the pupils,” and “schools may be closed by proper authorities on account of the prevalence of contagious disease.”

But the Education Department, which has significant power independent of the governor, indicated in an email that it might take a different tack.

“We believe the inequities among students inherent to remote learning are so great that, without a health and safety justification, a move to county-wide remote learning would be a derogation of the right to a thorough and efficient education,” the agency said.

The department also defended schools as safe: “The data in both West Virginia and nationwide show that schools are safe, particularly for younger learners in middle school and below.”

Until Jan. 19, all public schools will be remote only, education officials said.

“Families have the option to keep their children in virtual learning regardless of changes to in-person instruction,” the department’s news release said.

Referring to online learning, Justice said Wednesday during his news conference: “We’ve tried. We’ve tried really, really hard, but we all know, across the board, that we’re failing in that. We’re absolutely failing.”

While West Virginia has a documented dearth of broadband internet coverage and there has been anecdotal evidence of online learning problems, the Education Department said as recently as Dec. 8 that it hadn’t collected data on how students were performing in the fall.

On Wednesday, the governor and the department revealed a previously unshared statistic: a third of students have received failing grades in at least one core subject area, such as math or English. That information “was obtained through a snapshot of (West Virginia Education Information System) data,” the Education Department said.

Justice also announced Wednesday that, over the next two to three weeks, vaccines will be offered to all teachers and school service personnel, such as bus drivers and custodians, older than 50. Employees younger than 50 also will be vaccinated, Justice said, but he didn’t provide a timetable.