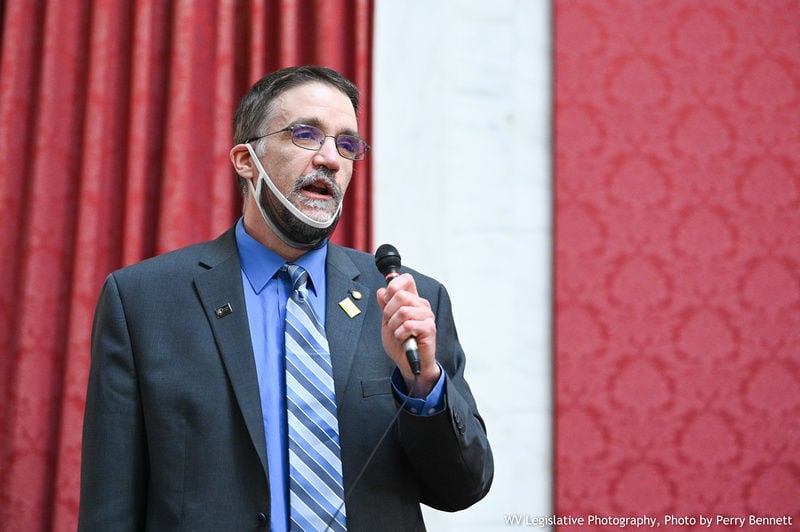 Del. Tony Paynter, R-Wyoming, is seen with his mesh mask around his chin as he speaks on the House of Delegates floor Thursday, Feb. 18. Delegates are required to wear a mask, but the type is not specified and it can be removed when they address the floor. 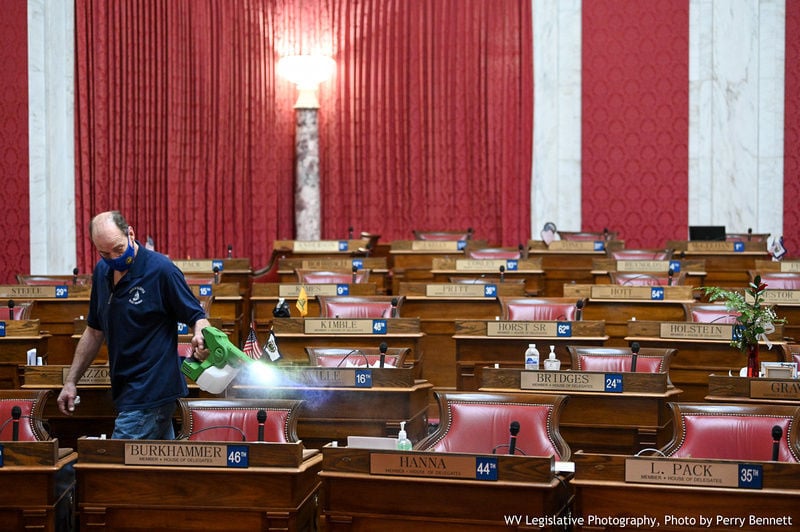 House supply clerk Cliff Harrison sprays disinfectant in the House of Delegates on Friday. Rooms are disinfected between every meeting in an effort to prevent the spread of COVID-19.

Del. Tony Paynter, R-Wyoming, is seen with his mesh mask around his chin as he speaks on the House of Delegates floor Thursday, Feb. 18. Delegates are required to wear a mask, but the type is not specified and it can be removed when they address the floor.

House supply clerk Cliff Harrison sprays disinfectant in the House of Delegates on Friday. Rooms are disinfected between every meeting in an effort to prevent the spread of COVID-19.

CHARLESTON — The West Virginia Republican supermajority in the Legislature is quickly moving bills this year, citing a possible COVID-19 outbreak, but the minority is questioning the motive.

Due to the pandemic, the Legislature is taking several precautions to hopefully reduce the risk of spread in the Capitol building. Committee meetings are limited to larger rooms with less seating for press and other guests. The rooms are sanitized after each meeting. The chambers are being utilized more and the galleries are open for members to get even more distance if they desire. Video conferencing is being utilized, in the Senate at least.

Public access inside the Capitol is limited. The public cannot sit in the galleries to watch the sessions nor can they visit committee meeting rooms. The public can make an appointment to meet with a lawmaker in person, but that's the only way they are getting inside the people's house.

"I think it's going pretty well," said House Majority Whip Del. Paul Espinosa, R-Jefferson. "We've tried to do our very best to safeguard all those here at the Capitol, not only members but staff. We have done our best to maintain social distancing. However, we want to make sure we maintain transparency. We continue to stream all of our meetings so folks can follow the proceedings."

Masks are also required of everyone inside the building, but there's a catch. The type of mask isn't specified, and a faction of conservatives - in the House, Senate and members of staff - have taken liberties with rule by wearing a mesh mask.

This week, a photo of Senator Bob Karnes wearing a mesh face mask during a Senate Transportation Committee meeting on Feb. 16 attracted some attention on social media.

The Gazette-Mail reached out to the spokesperson for the Senate for comment from Karnes late Friday.

Senate Minority Leader Stephen Baldwin, D-Greenbrier, and Senator Ron Stollings, D-Boone, each said senators who refused to wear face coverings were making a mockery of public health standards and putting their colleagues at the Capitol, many of whom have not had access to the COVID-19 vaccine, in danger.

Baldwin said he's had an ongoing dialogue with Senate President Craig Blair, R-Berkeley, about his concerns, saying Blair has made good effort to navigate the COVID protocol waters.

“I think 90 percent of the folks are doing the right thing and following guidelines, wearing the masks staying a distance from others,” Baldwin said. “Where we have the real issue with the people who are not compliant, the 10 percent. And it's not in the chamber. It's outside of the chamber before the session and right after session, it's in the hallways and in the offices.”

Senate Clerk Lee Cassis said things in the Senate had “overall gone fine.” He said the guidelines the Senate adopted said members had to wear face coverings but don't define face coverings or refer to any other public health guidelines, like those from the Centers for Disease Control, for protocols about face coverings.

Senators who don't want to wear a mask during Senate sessions can sit in the back of the chamber, but they are required to put on face coverings when they return to their desks to vote.

Stollings, a family care physician by trade, said he tended to two of his regular patients who died of COVID-19 this year, saying that not wearing a proper face covering is disrespectful to West Virginians who have died of COVID and their families.

In the House, Espinosa didn't comment on the mesh masks specifically but said from what he's seen, most members are not abiding by the requirement.

"We’ve tried to leave it up to individual members to wear the type of mask they feel most comfortable in," Espinosa said. "...We've tried not to micromanage that."

"I want them to look in the eyes the West Virginians who have lost a loved one, and they think wearing a mask is inconveniencing them? Come on," Skaff said.

Skaff said a COVID-19 outbreak is possible and he worries what those lawmakers who refuse to wear masks on the floor are doing in their own communities. But he said it's not a good enough reason to ram bills through without proper vetting.

While all Senate meetings are livestreamed with video and audio, the House has opted to only use audio for committee meetings, even when the meeting is in the House chamber. Zukoff said she sent a letter to House Speak Roger Hanshaw requesting the use of video livestreaming, but she hasn't gotten a response.

The House also uses less video conferencing capabilities than the Senate. While most are testifying to the Senate committees by video, the House is still inviting guests to testify in person. Because of the restrictions, Skaff says this leads to the majority getting to pick and choose who gets to speak, controlling the narrative.

"Yesterday we passed HB 2007. It impacts some 100,000 working West Virginians..." Skaff said. "They didn't consult any of those (professional) boards. Come to find less than 24 hours before the committee meeting an email was sent out letting them know this was on the agenda. During a winter storm, mind you. During COVID. My concern as the minority leader is they are using COVID-19 protocols as a way to keep people in the dark."

Skaff said he hoped the governor relaxing COVID-19 restrictions in the community would lead to restrictions being loosened in the Capitol regarding the public.

Espinosa said a lot of work was done on bills prior to the session, and said they are working in a deliberate way to make the session as efficient as possible. He said they have already shown they are willing to send bills back to committee or double reference them if the need arises.

"I want to emphasize the public can continue to reach out to members," he said. "I've spoken to a number of constituents, I've gotten emails, scheduled virtual meetings. I and colleagues in between meetings are participating in a lot of those virtual activities. I am doing my very best to remain accessible so the public can weigh in."