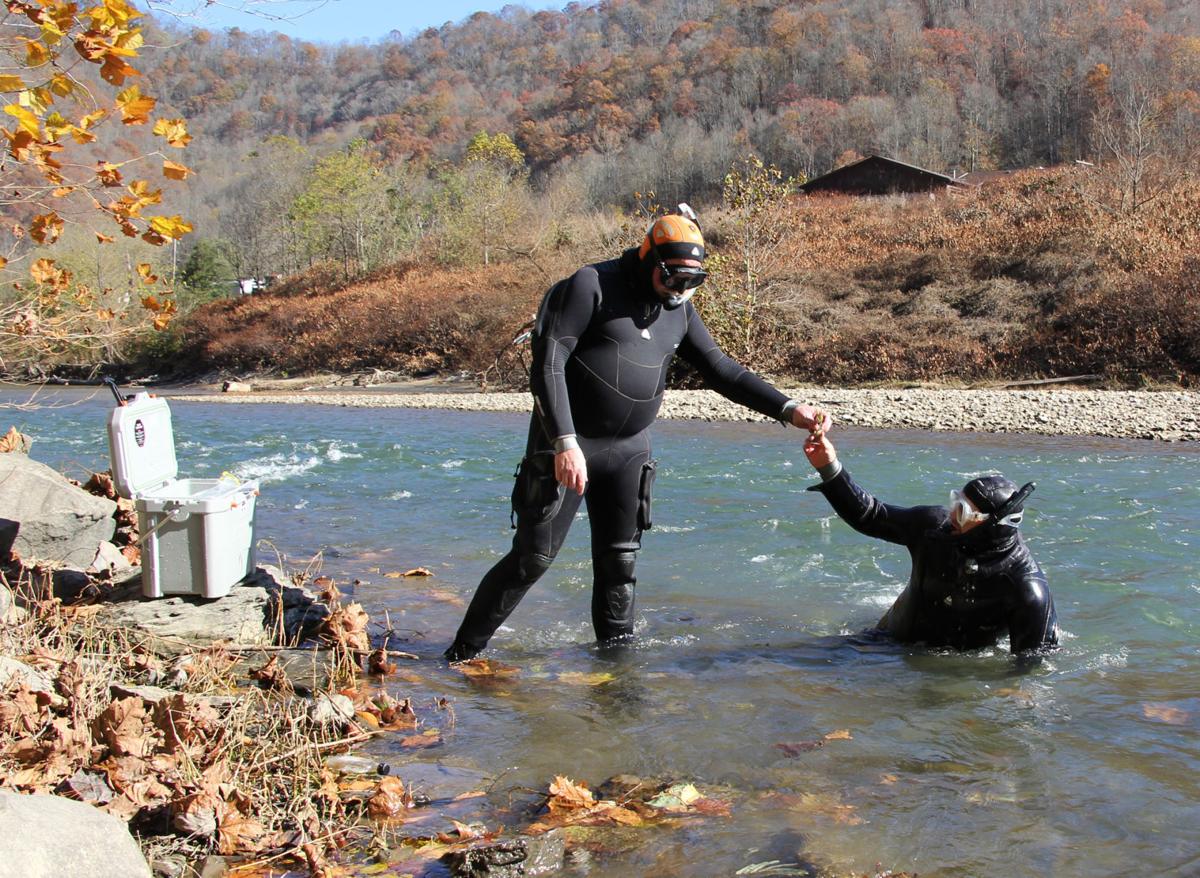 To return endangered crayfish to the Tug Fork River in a way that wouldn’t leave them vulnerable to predators, Zac Loughman, left, and David Foltz donned wetsuits and hand-placed each animal under stones on the river bottom. 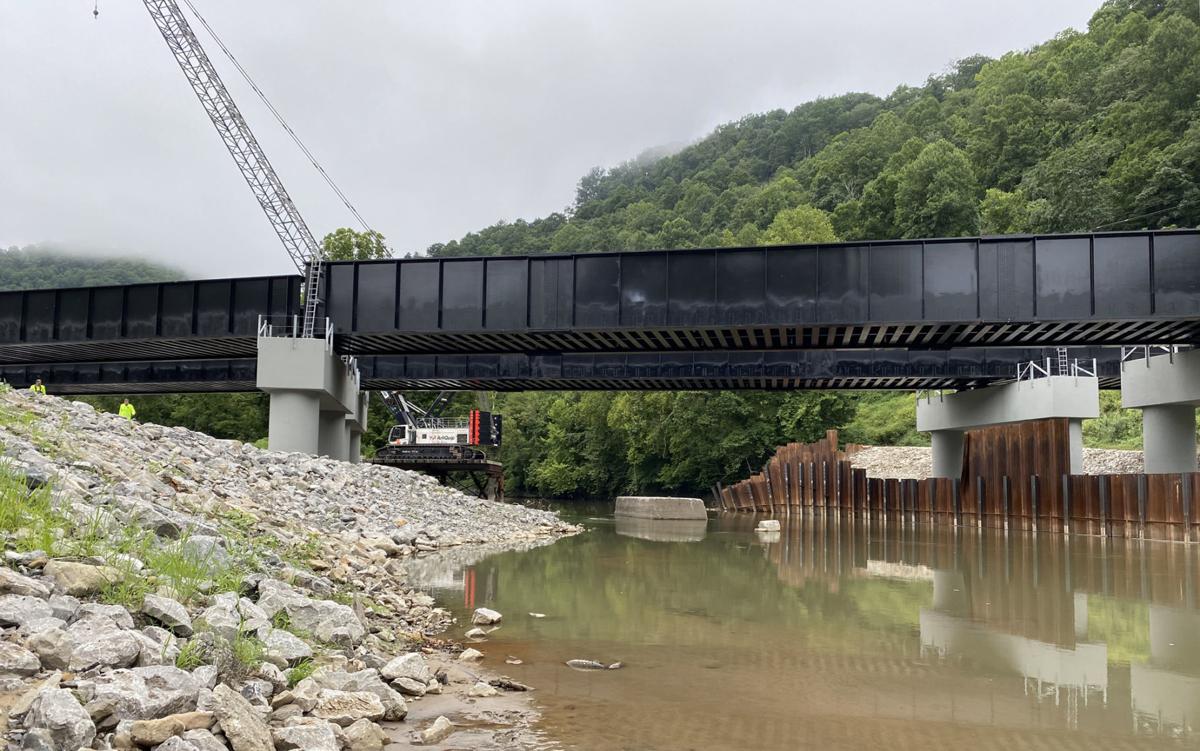 To build a new railroad bridge across the Tug Fork River, contractors for the Norfolk Southern Railway had to build a cofferdam to allow workers to construct one of the bridge’s piers. To minimize the cofferdam’s impact on endangered crayfish, the company had biologists capture 50 crayfish and hold them off-site until the work was finished. 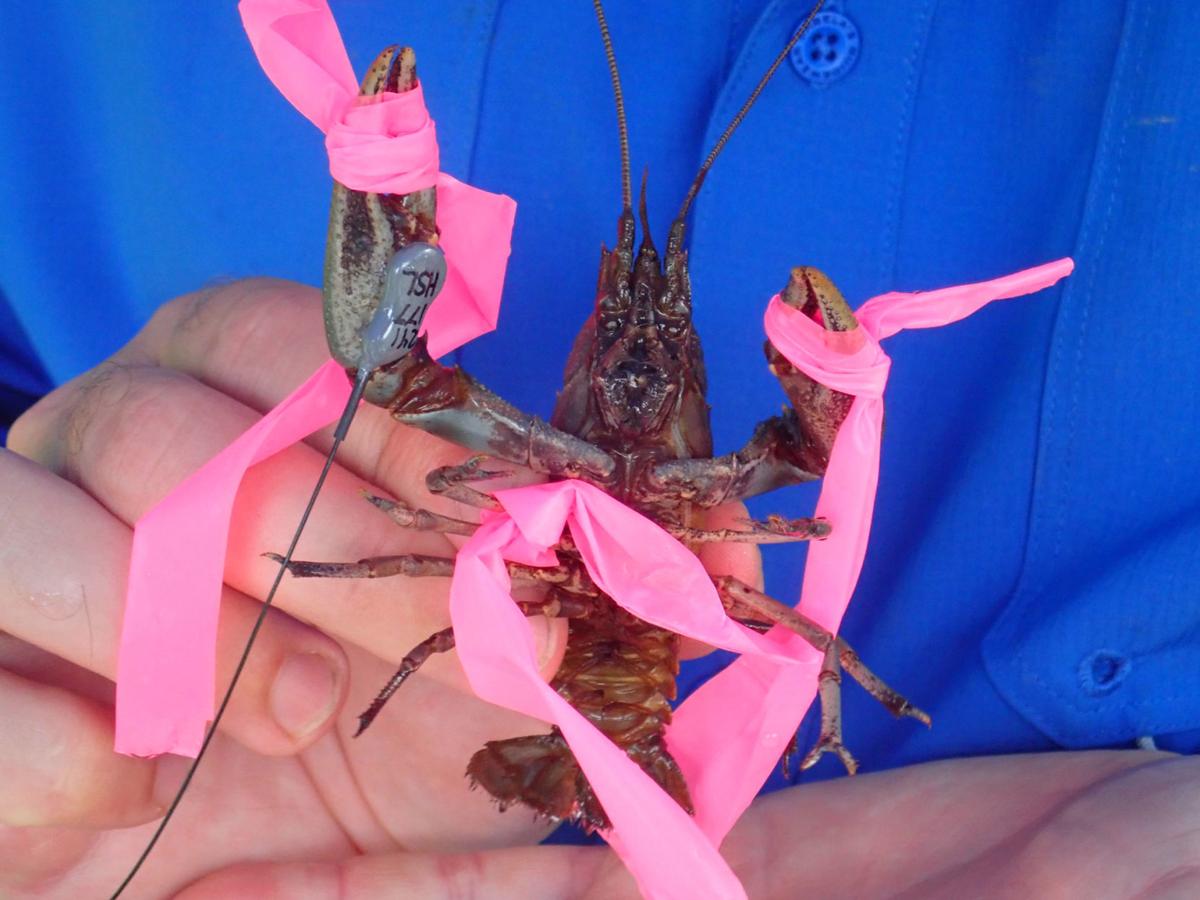 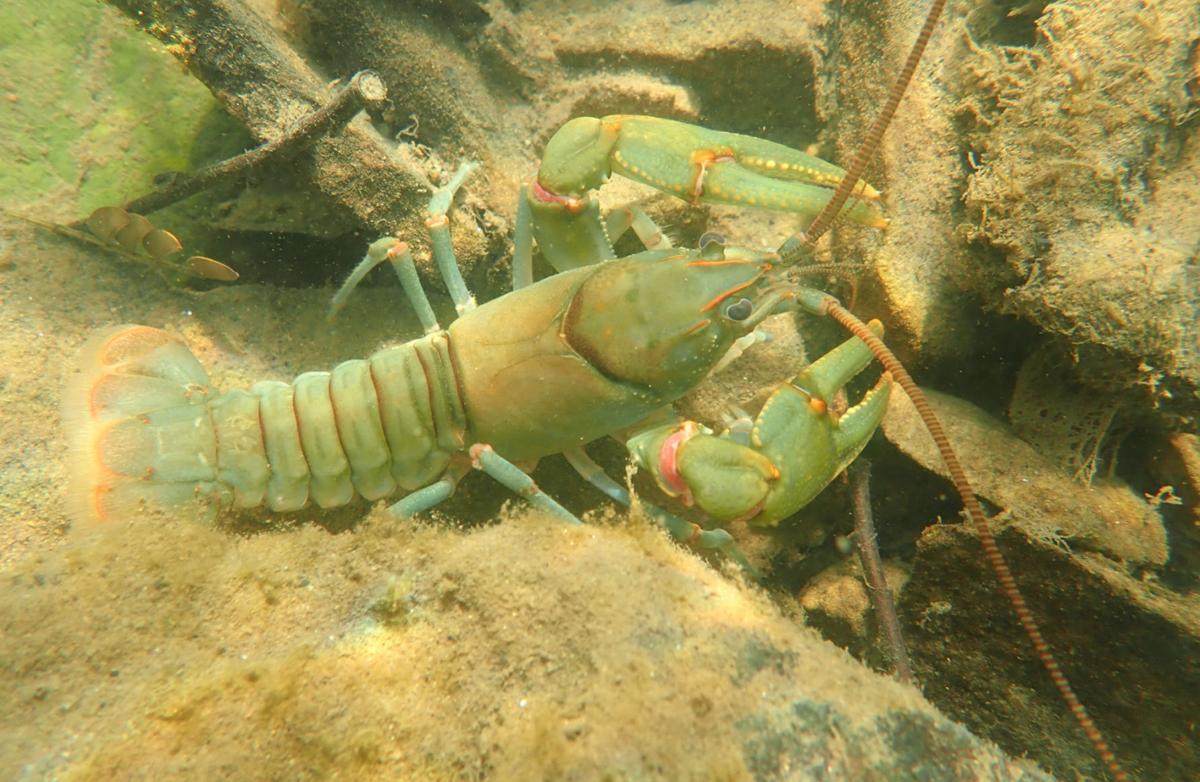 After being released back into the wild, the 80 Big Sandy crayfish conserved during the bridge-building effort wasted no time making themselves at home among the stones on the bottom of Tug Fork.

To return endangered crayfish to the Tug Fork River in a way that wouldn’t leave them vulnerable to predators, Zac Loughman, left, and David Foltz donned wetsuits and hand-placed each animal under stones on the river bottom.

To build a new railroad bridge across the Tug Fork River, contractors for the Norfolk Southern Railway had to build a cofferdam to allow workers to construct one of the bridge’s piers. To minimize the cofferdam’s impact on endangered crayfish, the company had biologists capture 50 crayfish and hold them off-site until the work was finished.

After being released back into the wild, the 80 Big Sandy crayfish conserved during the bridge-building effort wasted no time making themselves at home among the stones on the bottom of Tug Fork.

Strange as it might seem, a bridge-replacement project in Southern West Virginia might have provided the key to preserving two endangered crayfish species.

The new bridge, a railroad trestle that carries a Norfolk Southern mainline over the Tug Fork River near Matewan, was built in 2019. But before work could begin on the project, scientists had to ensure construction wouldn’t harm the federally endangered Big Sandy crayfish.

The solution involved capturing crayfish from the river, holding them until all the work was done, and then releasing them back into the wild. Along the way, scientists discovered a new approach for hatching and rearing crayfish in captivity — an approach that could bode well for other endangered crayfish species.

David Foltz, a senior mussel and crayfish biologist with Weirton-based Edge Engineering and Science, said the process began in 2017, when railroad officials began pre-construction planning to replace the bridge.

“Before they could proceed, they had to survey the area for endangered mussels, endangered bats and endangered crayfish,” Foltz explained. “We went down there and did the three surveys. We didn’t find any endangered bats or mussels, but we did find two Big Sandy crayfish.

“Since the species is federally listed, the railroad had two alternatives — move the project, or go through formal consultation with the U.S. Fish and Wildlife Service. They couldn’t move the bridge, so they went into consultation.”

In 2019, the Fish and Wildlife Service told Norfolk Southern it could proceed, but only if scientists collected 50 Big Sandy crayfish from the site, temporarily housed them off-site, and released them back into the wild after the bridge work was finished.

“The goal was to remove any animals that might have [been killed or harmed] by the in-stream construction work,” Foltz said. “Getting 50 of them seemed like a daunting task, given that we only collected two when we sampled there.

“But we very quickly hit that number, and eventually ended up with 80. We started radio-tagging and releasing the ones that were large enough to carry a transmitter.”

While construction took place, Foltz and the students tracked the movements of crayfish they had radio-tagged.

“We were there tracking once every 10 days from June through October of 2019,” he said. “We continued that until all the in-stream construction was finished.”

Shortly after construction ended, Foltz started to write a report about the project’s progress.

“In the process of doing that, we realized that a lot of the females we had collected and brought in had actually dropped eggs,” he recalled.

Closer examination revealed that some of the females that hadn’t yet borne eggs were ready to. Foltz and Zac Loughman, the West Liberty professor who heads up the Crayfish Conservation Laboratory, set about making sure they did.

“David had brought us some animals, and they’d already deposited eggs at the hatchery,” Loughman said. “We knew we were getting more than 50 crayfish then. When I looked at the females that hadn’t dropped eggs, I could see ‘glair’ under their abdomens — white patches that indicate a female is capable of extruding eggs.

“I was like, ‘Holy Moses, what’s going on here?’ Well, we had a lot of them drop eggs. We went from 50 crayfish to hundreds of them.”

Fortunately for the newborns, the people at West Liberty knew a bit about rearing crayfish in captivity. They’d done it with other species, and it didn’t take them long to figure out how to do it with their Big Sandy cousins.

“We had so many baby crayfish we didn’t have room for them all,” Loughman said. “We had to send a bunch of them to White Sulphur Springs, and the staff there worked out a special diet for them.”

“They grow more slowly in the wild because they have to compete for food with everything else in the stream, and they don’t grow during the winter when the water gets cold,” he said.

“In the lab, we had ideal conditions for them, and we were able to get them to sexual maturity in about 8 months instead of 3 to 5 years. Incredible.”

To rear the youngsters to maturity, scientists had to try to overcome one overarching hurdle — the animals’ tendency to prey on one another.

“There is a critical point at which they get too big to cling to their mothers, and they have to go off and do their own thing,” Loughman explained. “When that happens, they stop tolerating the presence of their brothers and sisters. In fact, they realize they’d make a wonderful meal.”

“Once they get to half-an-inch to three-quarters-of-an-inch in size, they will totally feed on any siblings they catch molting,” Loughman added. “So then, the issue becomes having enough facility space to raise these crayfish in individual cells.”

Neither the lab nor the hatchery had that many aquariums, so the caretakers had to improvise.

“We moved a bunch of them into bigger aquaria and threw a lot of stuff — PVC pipes, gravel, aquarium plants — into the aquaria in the hope it would create hidey-holes where the animals could molt in peace and not get eaten by their siblings,” Loughman said.

Students in West Liberty’s Zoo Science program were charged with caring for the crayfish while they were in human care.

“Those students are going to school so they can work in zoos with elephants and rhinoceroses,” Loughman said. “I brought them in and told them, ‘Hi guys, you’re taking care of crayfish now!’ They were like, ‘What?!’

“A couple of the students really adopted the crayfish, though. One in particular, Michelle Williams, checked on the animals several times a week while the school was shut down with COVID. I feel like the growth we observed was directly attributable to her care.”

In the end, 30 of the youngsters survived to maturity, and on Nov. 9 they and the original 50 were released back into Tug Fork.

Clad in wetsuits, Loughman and Foltz snorkeled to the river’s bottom and hand-placed the crayfish, one by one, into prime hiding places.

“We couldn’t turn them loose all at once without creating a feeding frenzy for the river’s smallmouth bass,” Loughman cracked.

Norfolk Southern paid all the expenses for the multi-year effort. Foltz said he wasn’t at liberty to reveal the actual cost of the project, but said it was “a drop in the bucket compared to the cost of the bridge’s construction.”

“If all the actors and players get unified, we can get those two species off [the Endangered Species List],” he added. “If we can get this propagation thing standardized, and then start restoring stream habitat for the animals, we’ll be cooking with gas. I don’t think this has to be a permanent listing.

“The big thing about this project is that the presence of an endangered animal didn’t shut down economic development. We were able to conserve the crayfish, and Norfolk Southern was able to put its bridge in. We met in the middle and were able to eat our cake and have it, too. That’s the way conservation should be done, if at all possible.”