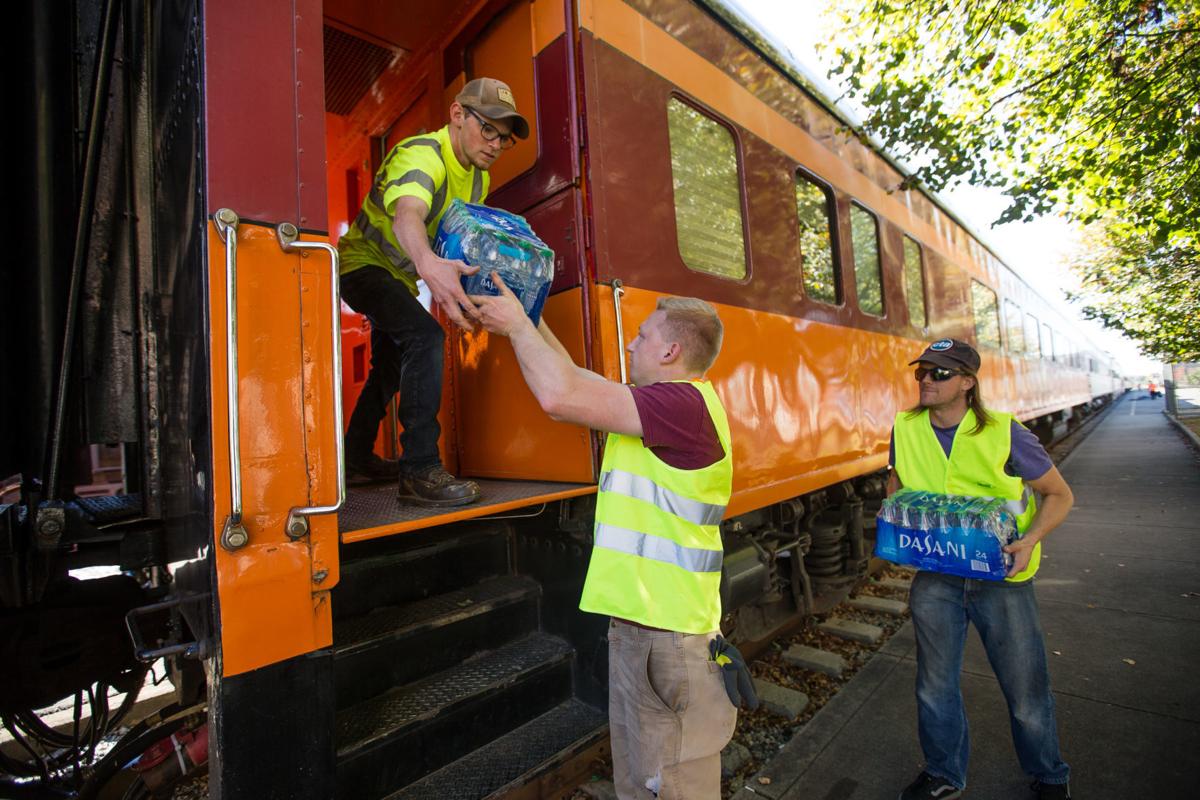 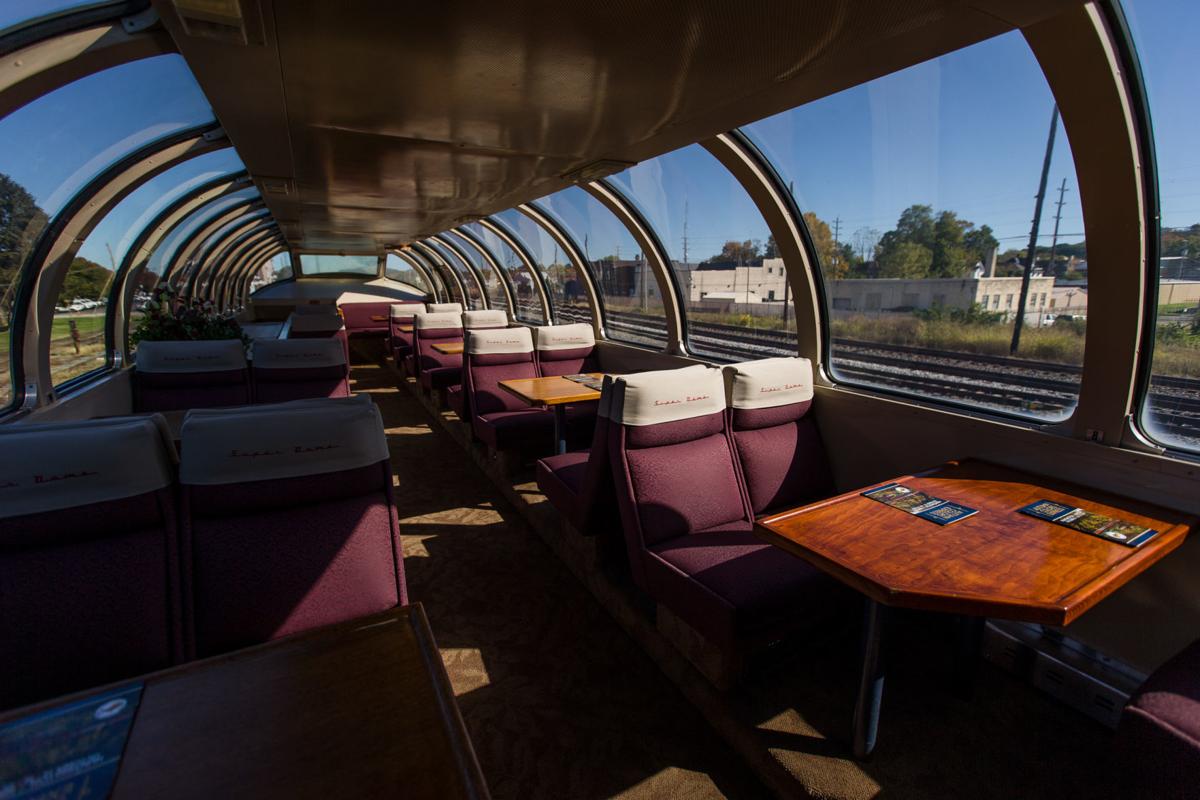 Interior of the Super Dome, a privately owned dome car, seen during a tour of the special passenger train assembled for the Autumn Colors Express on Oct. 24 at the C&O Depot in Huntington. 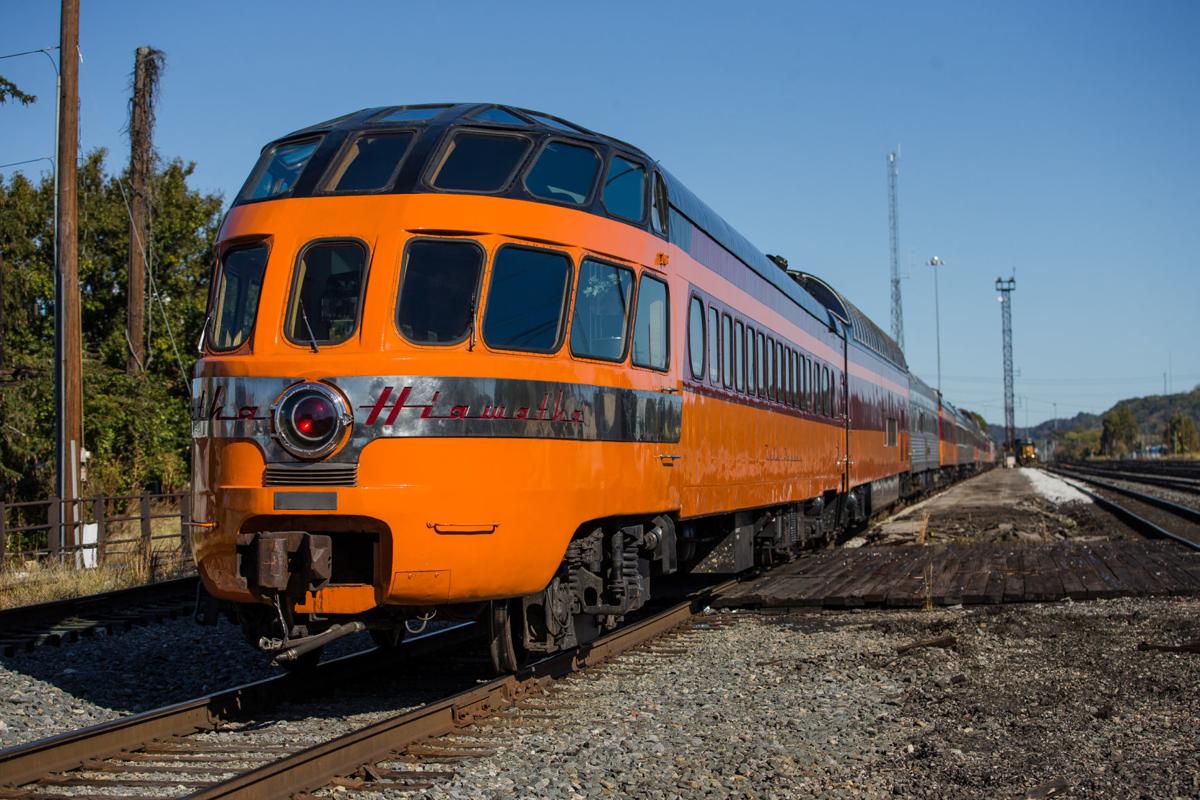 Exterior of the Cedar Rapids chairman's class car, seen during a tour of the special passenger train assembled for the Autumn Colors Express on Thursday, Oct. 24, 2019, at the C&O Depot in Huntington. 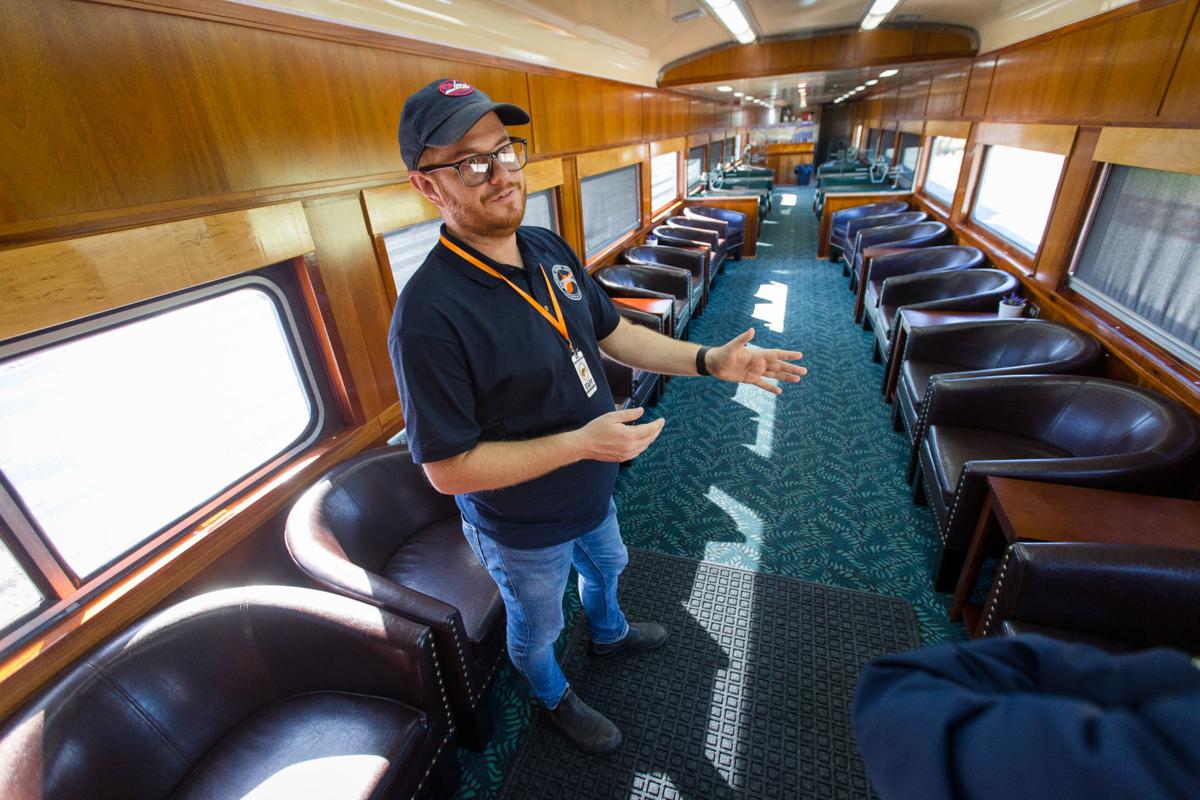 Interior of the Super Dome, a privately owned dome car, seen during a tour of the special passenger train assembled for the Autumn Colors Express on Oct. 24 at the C&O Depot in Huntington.

Exterior of the Cedar Rapids chairman's class car, seen during a tour of the special passenger train assembled for the Autumn Colors Express on Thursday, Oct. 24, 2019, at the C&O Depot in Huntington.

HUNTINGTON — On the eve of the inaugural run of the Autumn Colors Express, workers spent Oct. 24 loading ice, bottled water and other supplies onto the 21-car consist — a combination of private rail cars familiar to New River Train riders, and some historic cars making their first runs on the fall excursion route.

Most notable of those will be bringing up the rear for the first leg of the Huntington-to-Hinton round trip: The Cedar Rapids, a parlor-observation car that was the jewel of the Milwaukee Road Hiawatha trains of the 1940s and ’50s.

It features a dramatic glass-enclosed Skytop Solarium at the rear of the car, where a young Frank Sinatra held court in the luxury car en route to concerts in the Midwest, according to Rail Excursion Management Co. (Railexco) spokesman Lou Capwell.

“This is the car he was pretty happy with,” said Capwell, who said Railexco is thrilled to have the car in the Autumn Colors Express lineup.

He said only four cars like it were built, and this is the last one still operational.

Also making its first excursion run is Northern Pacific 549, a short dome car that owner John Webb III found rusting away on a siding in Spokane, Washington, and spent more than $1 million to restore to its original circa-1957 glory. At 62, it is one of the younger cars on the train.

“This is not only the first chance to ride this car, but this will be the only chance for people to ride this one until sometime next year,” Capwell of the car, which features a combination of dome, lounge and deluxe coach seating.

Conversely, Steve Sandberg, of Minneapolis, has eight cars on the train, most in Milwaukee Road livery, cars that have been making the fall excursion run for the past 26 years.

“We’re just happy to be back in Huntington this year,” he said trackside Thursday, noting the uncertain future of the train just months ago.

In February, the Collis P. Huntington Railroad Historical Society, which had operated the New River Train since 1966, announced that, because of money issues and higher operating costs imposed by Amtrak, it would not be running the fall excursion train this year.

However, less than three months later, Sen. Joe Manchin, D-W.Va. — who had worked with Amtrak to assure the New River Train’s operation in 2018 — posted a message on Twitter announcing that “a deal is in place” to continue the Mountain State tradition.

Manchin’s announcement proved to be accurate — but also premature.

It would be another 10 weeks before Railexco — a Midwest-based rail excursion and private car charter company — would be able to finalize the deal and formally announce resumption of the fall excursion train under a new moniker.

Unlike the New River Train, which operated on consecutive weekends, runs of the Autumn Colors Express were announced for Oct. 25, 26, and 27 — saving the costs of paying CSX to store the train in its Huntington railyard during the week.

Another obstacle with the late announcement was that Railexco had a window of less than three months to sell tickets, unlike New River Train tickets that generally went on sale in January.

Nonetheless, Capwell said sales were strong, with the Saturday run essentially sold out, some premium seating available for Friday, and some premium and dome seating for Sunday.

Capwell said adding a stop in Charleston helped sales, with a lot of ticket-buyers from Ohio opting to board in the capital city.

“I’m really impressed with what we were able to cobble together in two months,” he said.

For Sandberg, keeping the excursion train going without a lapse was vital.

“It’s important to keep this tradition alive, and keep this train running,” said Sandberg, who said he feared if the train lapsed this year, it might never have resumed.

“We’re happy the new organization stepped up and took on the responsibility of running the train,” he said. “It’s also extremely important to the local economies of Huntington and Hinton.”

Previously, tourism industry estimates have placed the economic impact of the excursion train at $5 million. The train is the focal point of the Hinton Railroad Days festival each year.

Manchin, meanwhile, issued a statement about the inaugural run, saying, “For more than 50 years, the New River Train has been at the heart of West Virginia’s proud railroading history as the focal point of Railroad Days. That’s why I’m so glad to see that tradition carry on with the Autumn Colors Express this year. I have been so proud to have worked with them to make sure our state could continue this important tradition. I wish everyone a safe and fun ride for this fall’s Autumn Colors Express.”

The train, which was assembled in Amtrak railyards in Chicago, arrived in Huntington Wednesday morning.

Photos from a tour of the special passenger train assembled for the Autumn Colors Express.