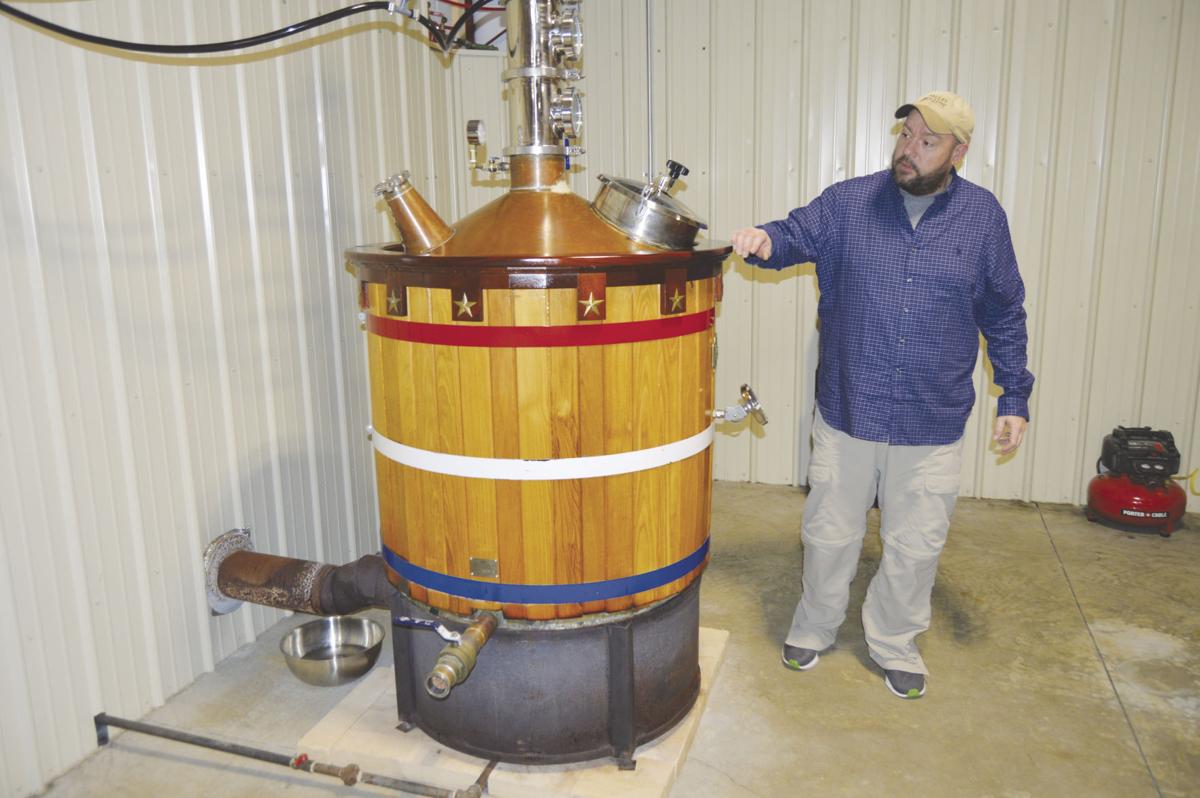 Kyle Lovern/WDN Josh Martin is shown with the copper and wood moonshine still at Pauley Hollow Distillery, LLC located at Forest Hills, Ky. The legal distillery is the first to open in Pike County. 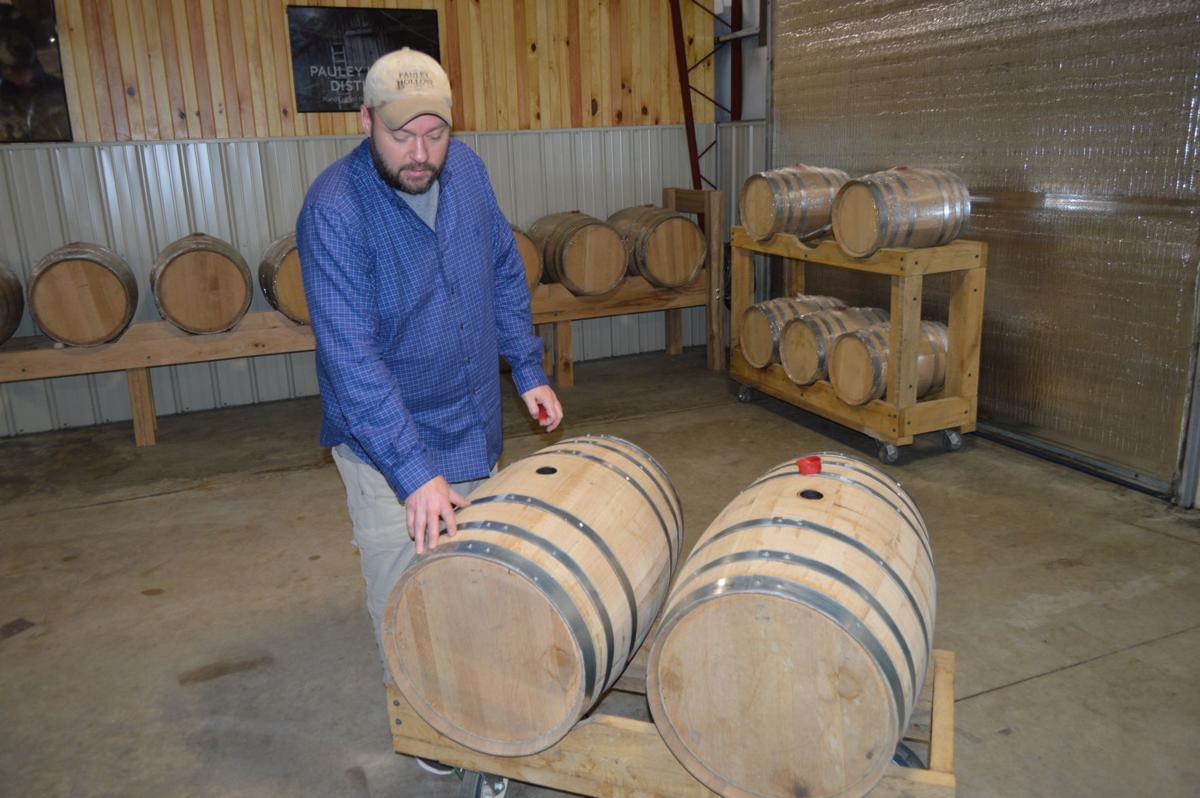 Kyle Lovern/WDN Josh Martin is shown at a couple of barrels that have bourbon inside and are ready for storage and the aging process. 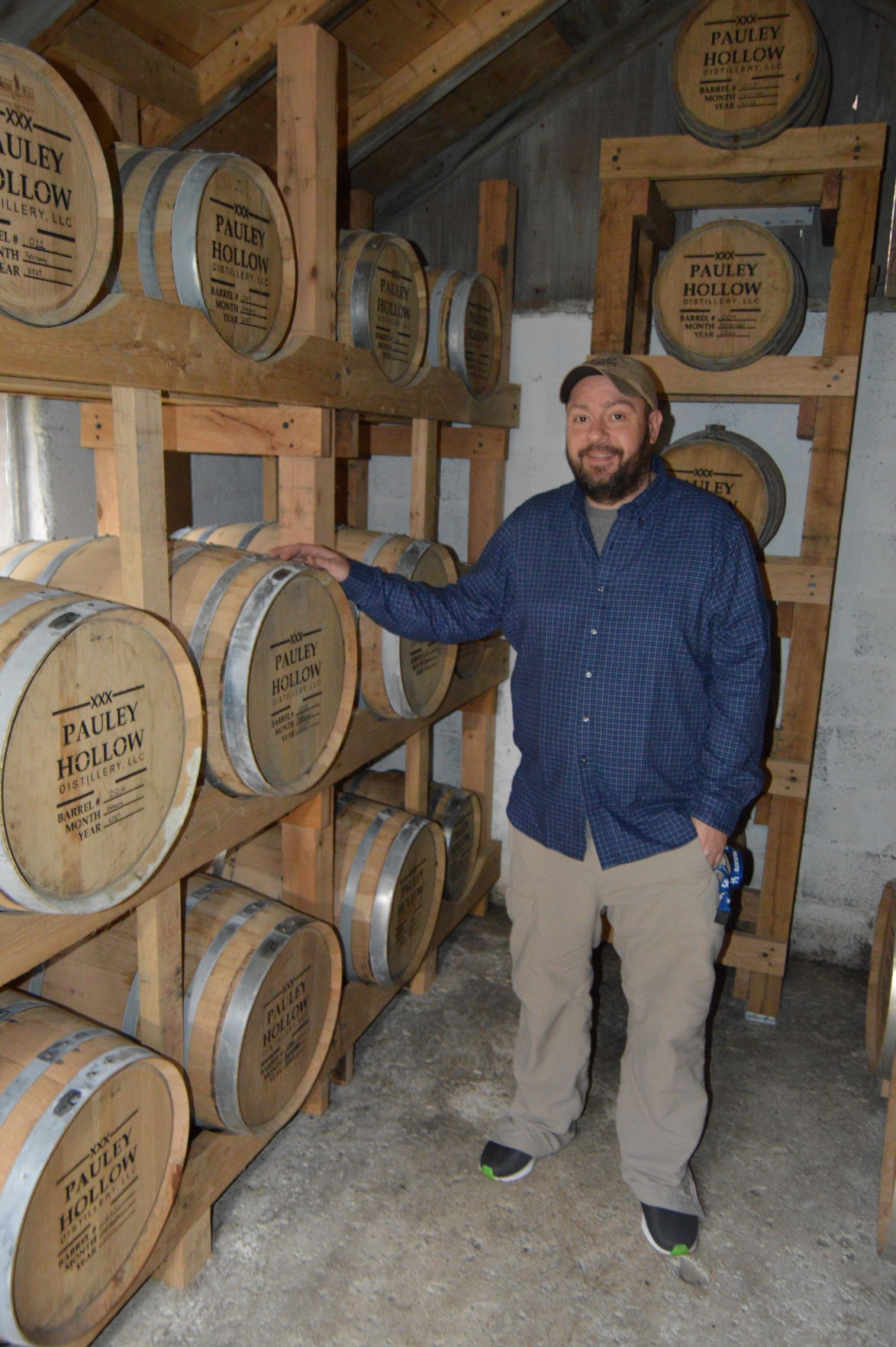 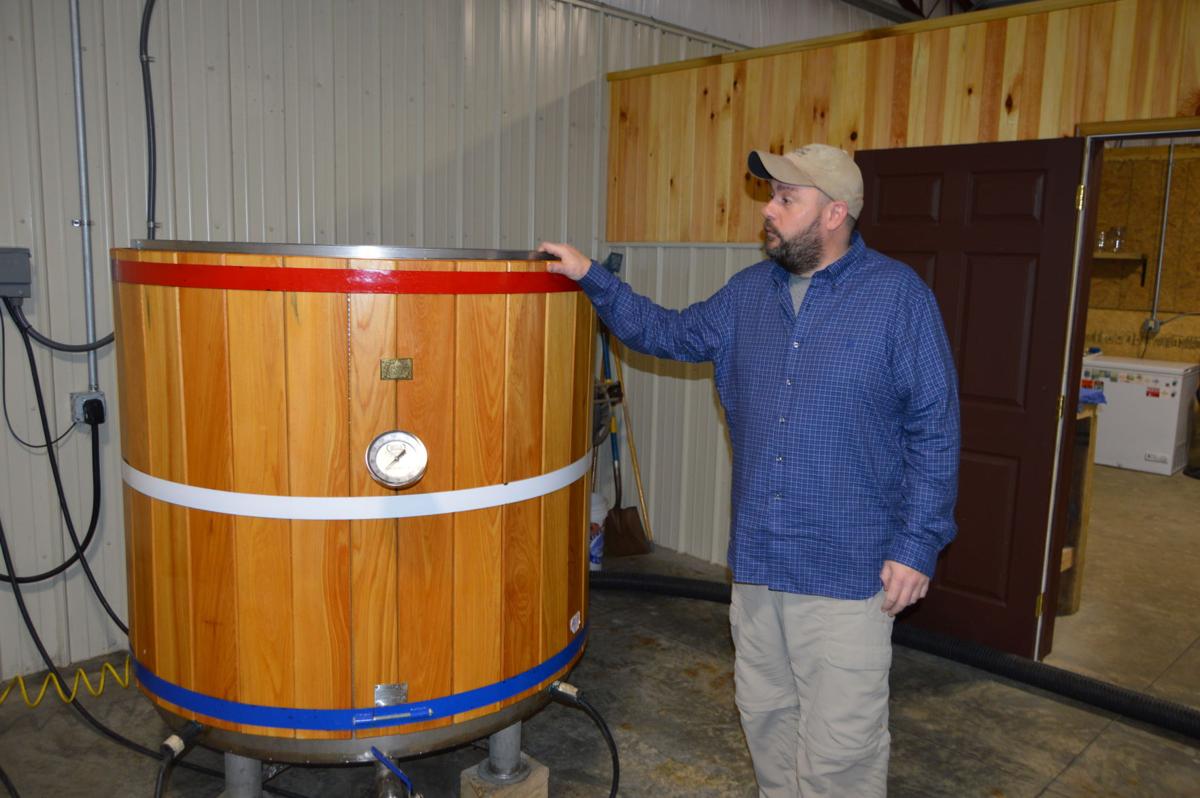 Kyle Lovern/WDN Josh Martin talks about the process to make bourbon. He and his wife Jessica started the local business and hopes it continues to grow with the market trend. 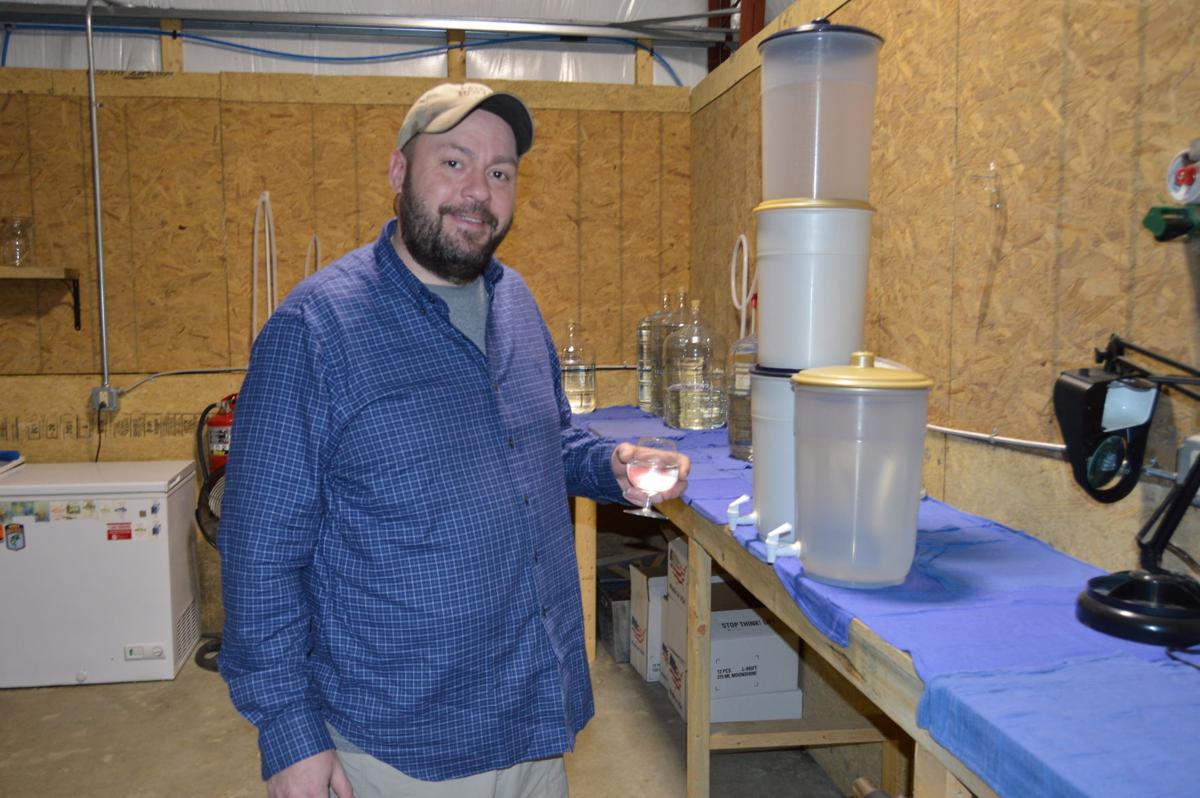 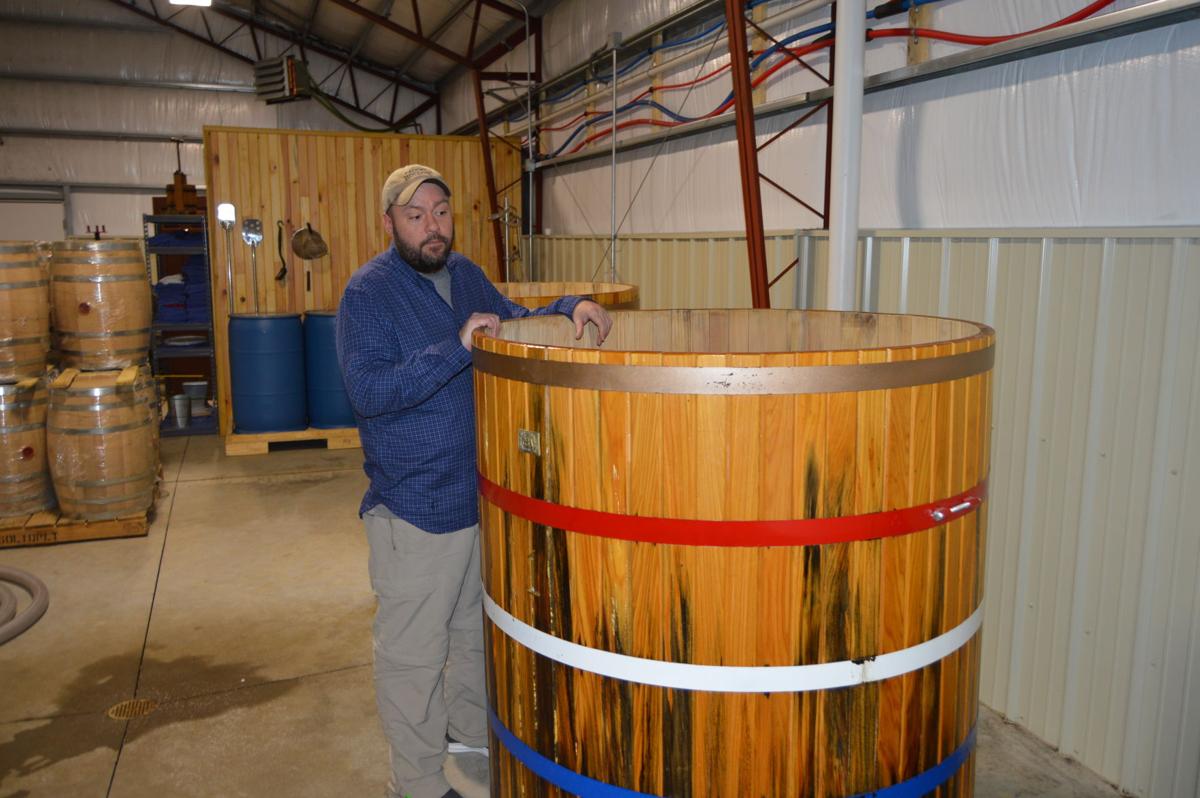 Kyle Lovern/WDN One of the sour mash cookers is pictured at Pauley Hollow Distillery. 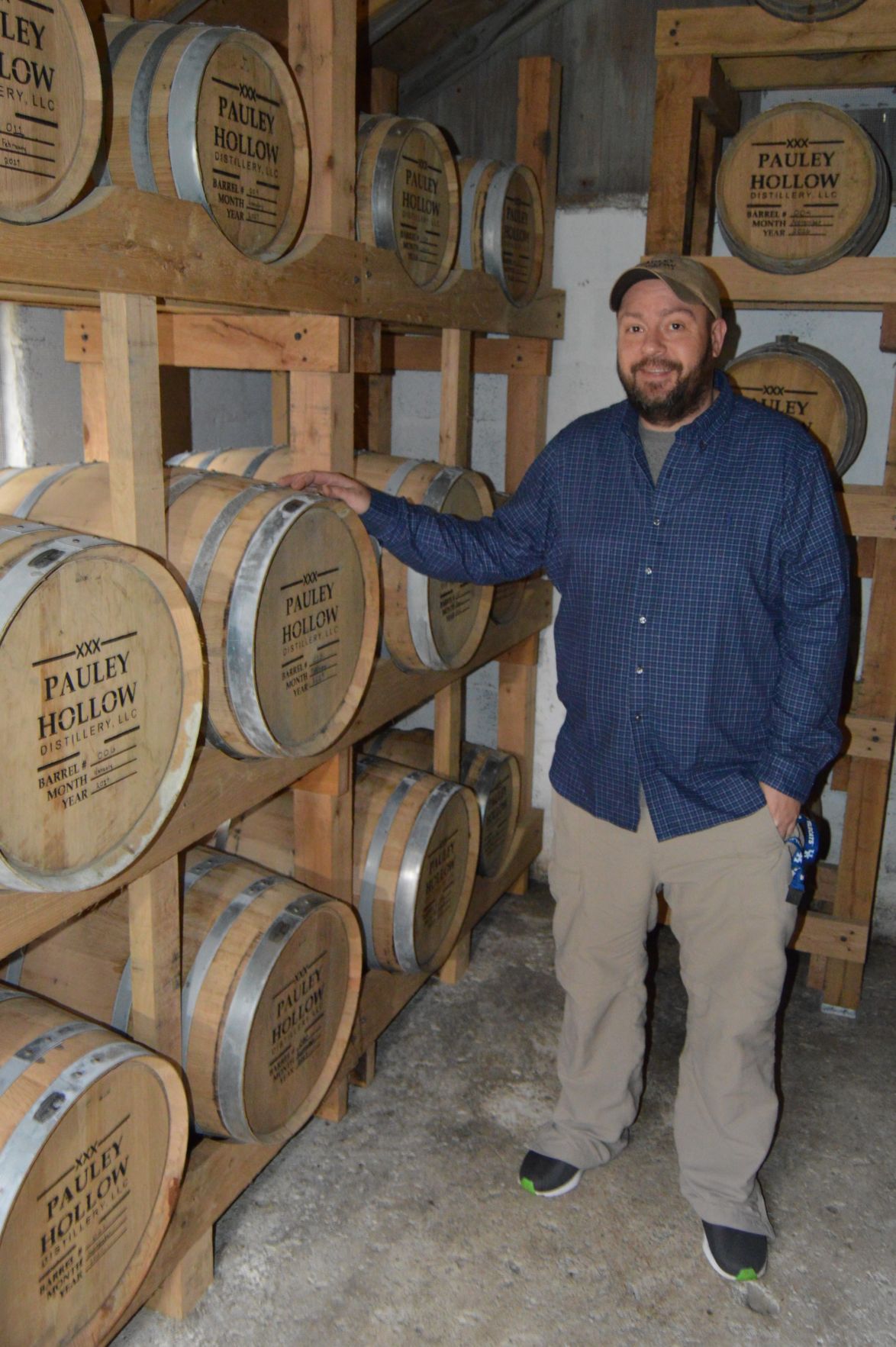 Kyle Lovern/WDN Josh Martin is shown with the copper and wood moonshine still at Pauley Hollow Distillery, LLC located at Forest Hills, Ky. The legal distillery is the first to open in Pike County.

Kyle Lovern/WDN Josh Martin is shown at a couple of barrels that have bourbon inside and are ready for storage and the aging process.

Kyle Lovern/WDN Josh Martin talks about the process to make bourbon. He and his wife Jessica started the local business and hopes it continues to grow with the market trend.

Kyle Lovern/WDN One of the sour mash cookers is pictured at Pauley Hollow Distillery.

FOREST HILLS, Ky. - In years past, moonshine was important to Appalachian residents. It was not only a part of mountain culture, but also a drink used for medicinal remedies. In the early 1800s and into the 1900s, the technique of cultivating moonshine was brought into the region by European immigrants.

Now fast forward to the 21st Century and Pauley Hollow Distillery, LLC located at Forest Hills, Ky. is the first legal distillery in Pike County. The distillery, located only five miles from the Williamson, W.Va. border, is a new business owned and operated by Josh and Jessica Martin, both Belfry High School graduates. "She is basically the engine that keeps everything going, I just make the liquor," Josh Martin said with a smile. In addition to their liquor business, both currently hold down full-time jobs. However, they are hopeful their venture will soon turn into full-time careers.

The name of the business comes from the Pauley family name on Josh's mother's side of the clan. The family owns 50 acres at the end of Forest Hills road. There are only 14 legal distilleries in the Bluegrass State. Their motto is "our mountain heritage made legal."

Pauley Hollow Distillery uses only local spring water from the family property which is filtered through a micron filter before any grain touches it. Their favorite source of water is from the 120-year old, hand dug, spring fed well on the old family homestead, which was owned by Martin's grandfather, Robert Pauley. "It was a reverence to them - to honor my family," Martin said of the Pauley name.

"I just started playing around with it in my garage," Martin said of making and experimenting with the beverages. "I started out making wine, because of our farm we had up here. We had fruit on it like blackberries, strawberries and grapes and after that, I started doing brandy with the fruit and that led to bourbon. It's been a learning process."

"We are currently producing an original recipe of moonshine and aging our bourbon and rye whiskey," Josh Martin said. There is a distinct aroma at the building. The business opened in 2016 and now has several barrels of bourbon that are in the aging process.

"We had to go through the permit process," Martin added. This was with both the federal and state government. They had to take a gamble and build the distillery before it was ever actually approved. The officials come in and do the inspection after everything is built. "Everybody thought I was crazy to build this in a dry county, but actually the biggest distilleries in the world, like Jack Daniels, is in a dry county."

This is a small family operation located in eastern Kentucky. Martin says they use only quality ingredients and that "hard work set us apart from other distilleries."

The different beverages will be distributed out of Louisville, Ky. and then shipped back to Pikeville, Ky. The city of Pikeville and other towns allow for the sale of alcoholic beverages, even though the county does not allow alcohol to be sold in other areas.

Pauley Hollow Distillery has done taste testing and sampling at different locations and events in Pikeville. They hope to expand on that into other states, including West Virginia.

Josh and his wife Jessica are involved in every aspect of the process from selecting and grinding the grains to cooking the mash to distillation to bottling and labeling. They also took some locally grown Kentucky apples, thousands of them, and made some brandy out of that fruit. This was also processed by hand, which made for a tedious time of apple peeling.

He has also been talking to his cousin Robbie Maroudas, a Williamson native, about distributing in South Carolina. Maroudas has a couple of restaurants in Hilton Head, S.C. He hopes to distribute to other restaurants as well.

Martin says the company hand selects grains and uses only the finest ingredients. They have very high standards.

Martin said the company has 10 and 30-gallon barrels that are made from Minnesota white oak. For their bourbon, they use a No. 3 char barrel. Caramel and toffee flavors are also present and provide a beautiful amber color. We use a No. 4 char barrel for our rye which adds smoke, coffee, and chocolate flavors and a darker color.

Their barrels are aged on oak racks in an open-air rack house located next to the distillery, nestled between the Appalachian hills. From there, the bourbon experiences the full temperature changes of the four seasons. This gives the bourbon and rye a smooth, distinct flavor, which Martin thinks will be very popular as he continues to produce it.

The bourbon won't mature until August 2020, but he hopes to have sample tasting late in August of 2019, and then soon start shipping his first batch to the distributor and eventually into retail outlets. The barrels for the brandy came from California, the same kind that is used for Chardonnay. The premium bourbon will be aged from 4-10 years before actually being bottled.

Martin hopes to have the apple brandy on the market before the bourbon hits the shelves. It doesn't take as long to develop the time varies on this beverage anywhere from two to three years.

The Martins hope by 2020, after the first bourbon starts dropping out of the oak barrels, that they can add five or six employees. "Our goal is within the next 10 years to have 10 people working for us full-time," Martin added.

Martin said the hardest part is producing, but not seeing immediate results. In this type of business, patience is very important. It takes a while for the bourbon to mature and be savored.

The moonshine can be fermented and sent to market in about two weeks. They already have these at markets in Pikeville and Louisa, and they are getting ready to expand to northern Kentucky, Lexington and Ashland in the near future. The moonshine is made in a 150-gallon copper and wood still, which was built locally. The fermenters are in 300-gallon cypress wood barrels. They use natural gas from the property to fire up the recipe.

It is triple filtered to remove any impurities and to give it a smoother taste.

Pauley Hollow will attend festivals like Hillbilly Days in Pikeville, Ky. and schedule tasting events. He hopes to expand and promote the products into the Mountain State as well.

Martin just makes straight moonshine now and has not added any flavors. They are currently making two different styles of 'sour-mash' bourbons. This is definitely a mountain recipe. I've spent some time and gotten the recipes from the old timers."

"Our corn comes from West Virginia, and rye comes from Kentucky," Martin stressed. The barley is imported, only because it is not grown in Appalachia. He said the moonshine has sold well and that a high number of bottles have been sold and distributed.

"The bourbon industry is exploding right now," Martin said. The same for the market for moonshine made in Appalachia. 'People want something from a small distillery that is unique. We already have liquor stores and restaurants that are wanting to purchase entire barrels."

"This is a hobby gone wild," Martin said with a smile. "We wanted to do it all local and all traditional. We grind up all our grains by hand. There is no automation. It is a labor of love."

Pauley Hollow Distillery is gunning for future success and the Martins are well on their way toward that goal.

The company has hats, T-shirts and notebooks for marketing purposes and a website www.pauleyhollowdistillery.com.