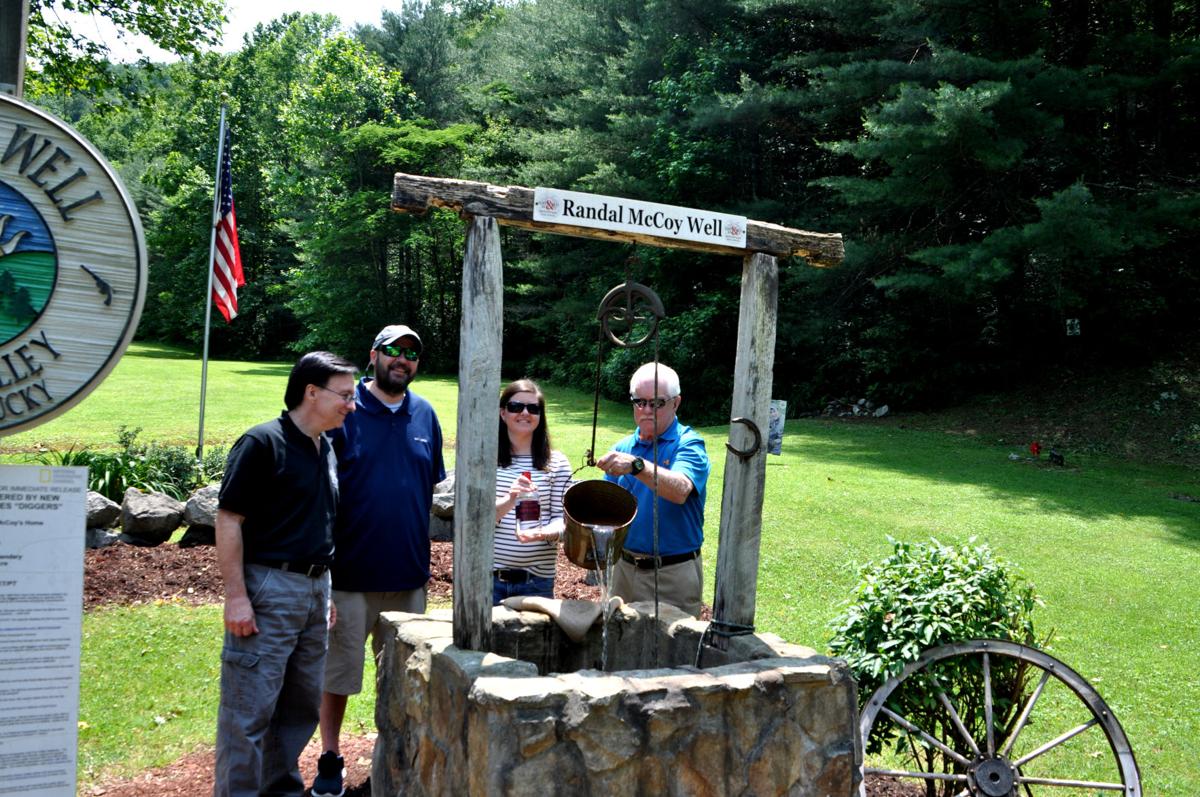 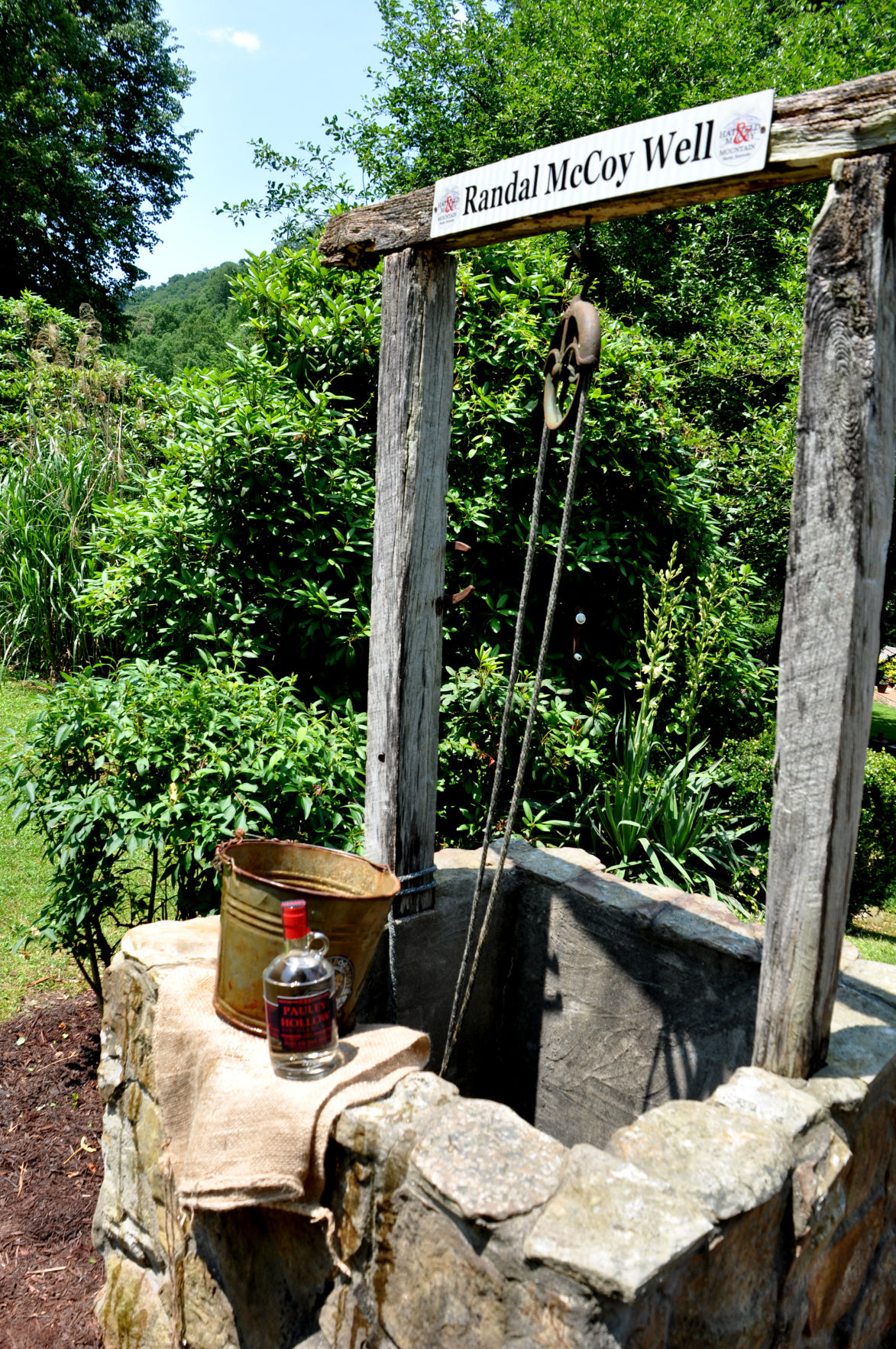 Kyle Lovern/Williamson Daily News The Randall McCoy well is pictured above, which is located at Hardy, Ky. The sample bottle of the new Fuel of the Feud moonshine is pictured beside the bucket of the old water well, which was owned by the McCoy clan. 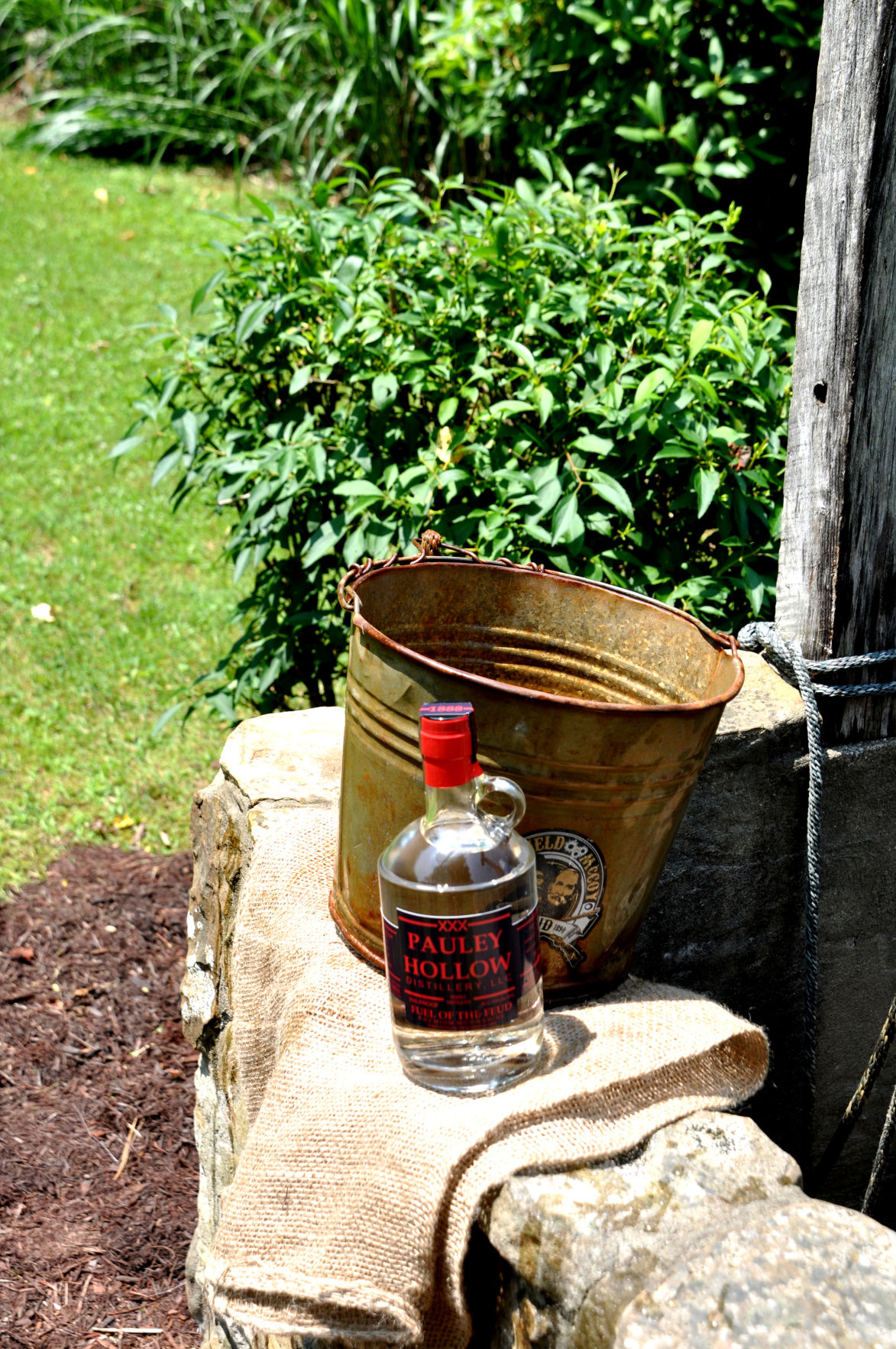 Kyle Lovern/Williamson Daily News The sample bottle of the new Fuel of the Feud moonshine is pictured beside the bucket of the old water well, which was owned by the McCoy family clan.

Kyle Lovern/Williamson Daily News The Randall McCoy well is pictured above, which is located at Hardy, Ky. The sample bottle of the new Fuel of the Feud moonshine is pictured beside the bucket of the old water well, which was owned by the McCoy clan.

Kyle Lovern/Williamson Daily News The sample bottle of the new Fuel of the Feud moonshine is pictured beside the bucket of the old water well, which was owned by the McCoy family clan.

HARDY, Ky. - What do you get when you combine clear, fresh well water from the original McCoy family log cabin site with Pauley Hollow Distillery? Real Appalachian moonshine made in Pike County, Kentucky.

The old rustic water well of Randal McCoy, who was the patriarch of the McCoy family of the infamous feud, is nestled in a quaint mountain valley at Hardy, Kentucky. The well is about 30 feet deep and located on the property, which is now owned by Bob and Rita Scott.

If the well could talk, it would say "I'm just now enjoying the scenery, heritage and especially the friendly people who visit as they travel Route 319 at Hardy, Kentucky," said Bob Scott, a longtime local businessman.

"Randal McCoy and Devil Anse Hatfield disagreed on most things; however, the one thing they may have agreed on was moonshine," Scott said. "During the feud, moonshiners in the land of the Hatfields and McCoys would gather throughout the mountains and make homemade brew. They would use the moonshine for personal use or special occasions like the election day at the Hog Trial in 1882."

Today, things are done a little differently. For several years, Scott dreamed of using water from the well to keep the history of the feud alive. After sharing his thoughts with Josh and Jessica Martin, owners of Pauley Hollow Distillery in Forest Hills, Ky., they decided to take water from the historic site to create Fuel of the Feud Moonshine.

"It is historic - Randall McCoy and his family actually drank from this well," said Jessica Martin. "Bob had come up with the idea, and he contacted us back in January. He said, 'I've got this well source. You guys are local, and moonshine is part of our heritage.'

"Josh came up with the mash recipe and the name Fuel of the Feud," Jessica Martin said. "Josh said that there is an old saying - that there are three loves or three fights in a jar of moonshine - the Hatfields and McCoys were feuding and fighting. We are trying to use this moonshine to promote the families coming together and to help promote tourism in the region."

The well is mentioned in Truda Williams McCoy's book, "The McCoy's," Scott said.

"In the book, she relates the legend of the New Year's Eve party of 1888. Nine heavily armed Hatfields attacked the McCoy cabin and set it on fire late in the night," he said. The well is on the property where this feud incident took place.

According to the book, the McCoy family had exhausted their supply of water and milk in the house in efforts to extinguish the flames. Calvin McCoy called to his sister Alifair to draw water from the well so he could put out the fire. Calvin reasoned that no one would shoot a woman.

"When Alifair went toward the well with the bucket, someone was hidden in the shadows behind the well box," Scott said. She identified the man as Cap Hatfield, son of Devil Anse. "Tossing her head defiantly, she started toward the well," the book stated. "A shot rang out, and she crumbled to the ground dead."

"I am here to support my friend Bob Scott," McCoy said with a smile. "Even though he is a Hatfield descendant, we have been friends for many years. This has been a dream of his to take the water from the actual McCoy well and make a local moonshine."

He said moonshine is as much a part of the feud heritage as anything else.

"It was part of the lifestyle in those days," McCoy said. "Pauley Hollow is doing a great job - using local products and old-fashioned recipe to create this product. It is respectful of the heritage of the two families. I am here as a family member to support this product."

Scott said this is not encouraging people to drink, but to purchase it more as a keepsake.

"This is something that is actually made from a place where part of the feud actually occurred," he said.

The new brew should be available by the end of June or the first week of July. Pauley Hollow Distillery is Pike County's first legal distillery. They not only started making moonshine in August 2016, but also are making bourbon and rye whiskey, which are now aging in oak wooden barrels at their plant at Forest Hills. The bourbon and rye should be on the market in 2020, once they have properly aged. The Fuel of the Feud moonshine is their second moonshine on the market. They are already selling their original recipe drink in West Virginia and Kentucky but will soon be marketing it to other states such as South Carolina.

Kyle Lovern is editor for the Williamson Daily News. He can be contacted at 304-236-3526 or via email at klovern@HDMediaLLC.com.